THESE 13 ANT FACTS WILL BLOW YOUR MIND!

Isn’t it great that the tiny ants we see daily, are one of the most incredible organisms residing on Earth. Here are some ant facts, which will not only baffle you, but also make you question your own intelligence.

With over 12,000 species of ants residing on the planet in different countries of Africa, Asia and Australia, they beat the human population by one million to one.

If you ever find an ant coming right down towards you from up above your head, do not be surprised. Some species have a distinct ability to perform wingless flight with the rate of descend as low as 8 mph rather than of a dead fall.

3.Swimming? Not a big deal for us.

Odontomachus bauri: For tropical ants, living in the flood- regions, surviving is quite a struggle. Odonotomachus bauri is the fastest swimming specie with a breathtaking pace of more than 3 body lengths per second. This is a slow-motion video of the ant swimming over water. It’s actual speed is 8 times shown in the video. The grid is of one by one square centimeters.

4. They can stay underwater for 24 hours!

Polyrhachis sokolova is a species of ant that can stay as well as nest underwater. To breathe they go to small underwater pockets of air, as they do not have gills. Sometimes, they stay underwater for weeks. That is quite an extraordinary power, isn’t it? 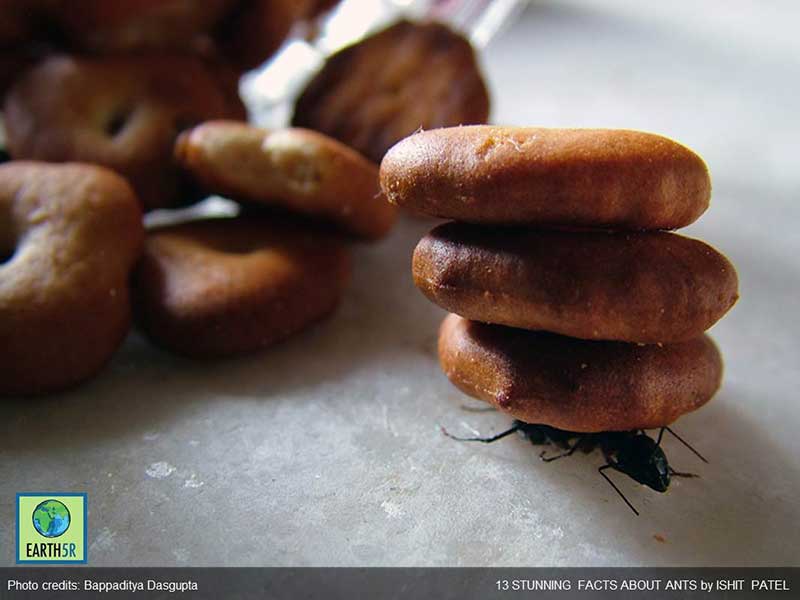 It is quite surprising to know that even ants have a dominating nature. Polyergus breviceps is a specie of ants that resides in every colony, commonly known as special Raider Ants. These ants specifically design strategies to seize the larvae eggs from other ant colonies during an invasion. These eggs are raised as slaves and are made to perform numerous tasks like cleaning the queen, gathering food, feeding the larvae as well as the queen and even defending the colonies. 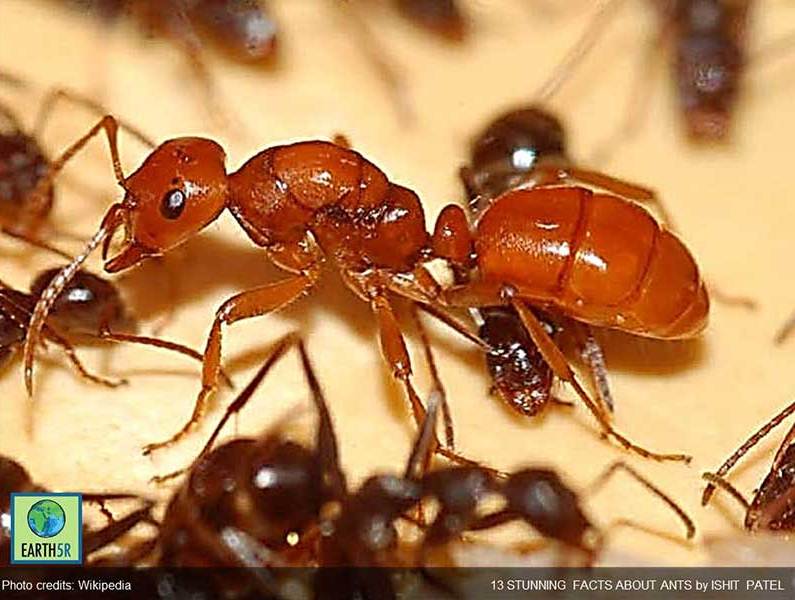 7. These small creatures had ancestors living in the Dinosaur Age.

Ants have inhabited the earth since the age of Dinosaurs and have adapted to the most strident climates with the passage of time. They are considered to be living on this planet since 100 million years and are believed to be the most successful species. Martialis heureka has been the oldest residing ant specie that is 120 million years old.

8. The ants you see are all females.

All the ants moving around in your house, on the roads, on the tress or on the tuft of grass are female. Male ants have a life span of few months and die after mating with the queen ant. That is all the males can do in the world of ants. Quite sexist! 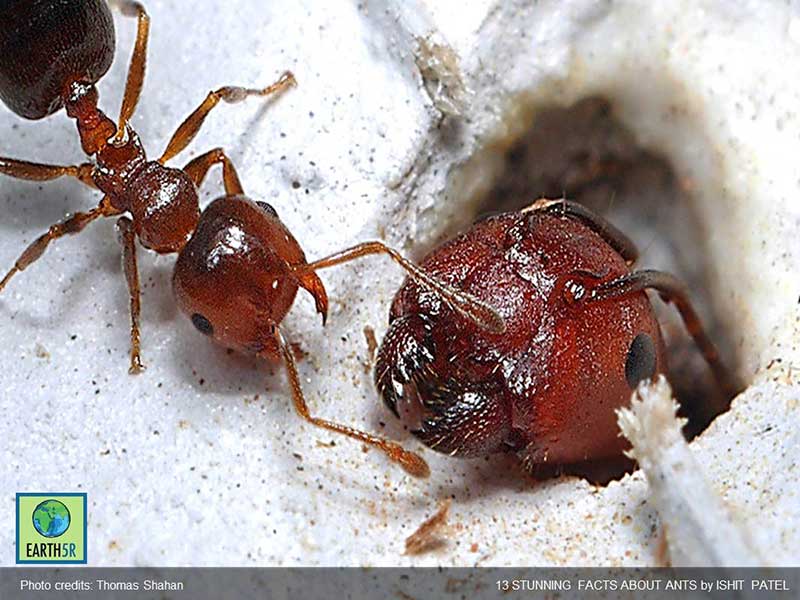 Interacting with the queen. Photo by Thomas Shahan.

9. They live lavishly in large houses.

These small creatures develop gigantic colonies of several kilometers. The largest colony was excavated close to the Mediterranean Coast that stretches for 6000 km. Believe it or not; it is almost equivalent to the radius of the earth. 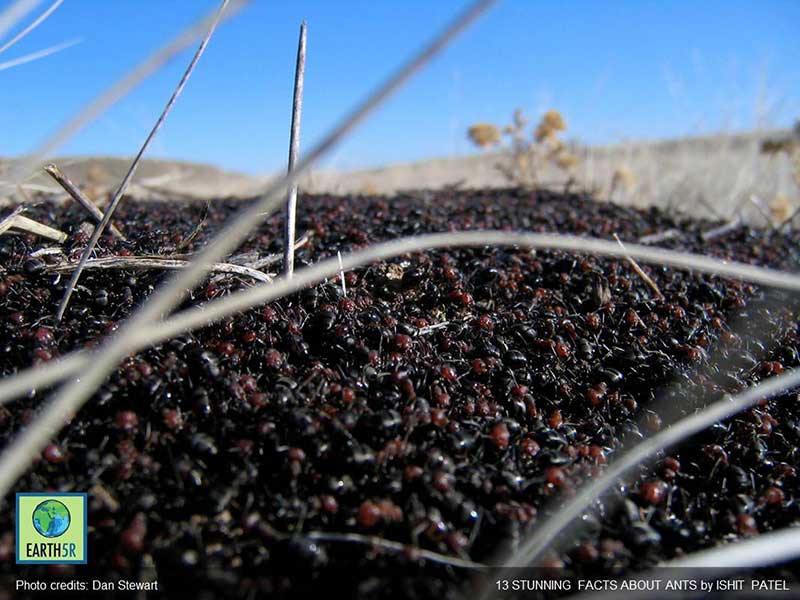 10. They are born architects.

These little creatures build colonies with the most advanced scientific principles of air circulation, temperature control, and water management systems. They designate separate places for nurseries, food storage, dumping and fungal gardens which are connected by major routes and sub routes.

Some ants of the colonies act as living larders. These ants gather food, juices and even fats from insects and store them in their bellies until they become as big as grapes. In the time of scarcity of food and other supplies, these ants regurgitate the food and feed other worker ants. Amazing isn’t it? 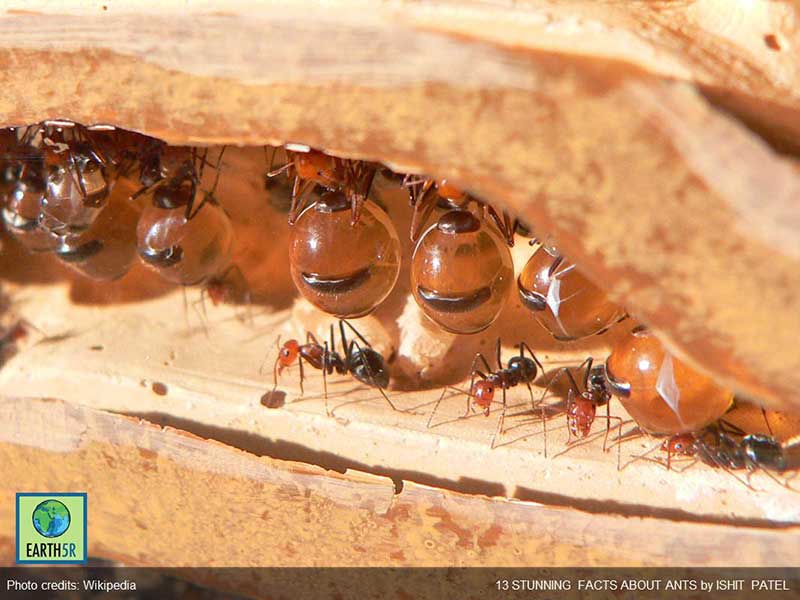 12. Not just creatures, rather learned farmers.

Yes, that’s right. Ants have a magnificent knowledge about farming and feeding the colonies. Some ants farm tiny mushrooms within the colonies while a special specie, Cyphomyrmex distinctively farms yeast. It is the same yeast that is used to make bread. Dissecting various insects and beetles and scattering them at defined places permits growth of a thin layer of yeast that is used to feed the larvae. 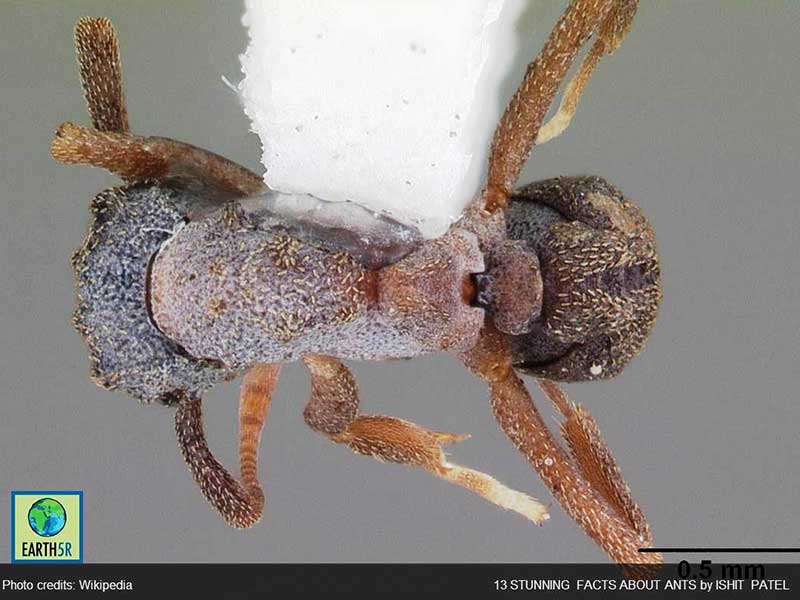 Fire Ants (Solenopsis invicta) found in tropical regions have the splendid ability of making rafts using their own body to save the fellow ants from floods. As the water level on the ground rises, these ants come together and entangle into each other to form a large water repellant surface over which the other ants climb and move around comfortably while the raft moves with the flow. Fire ants have special hydrophobic skin over their bodies which allow them to float over the water.

All these ant facts, amazing behavioural traits and  excellent managerial abilities of ants might get us thinking about the magnanimity and vastness of nature. It is not just ants, there are millions of species that have the kind of abilities that humans have never even though of. So, let us keep exploring the wonders of nature and start respecting the life we live around. 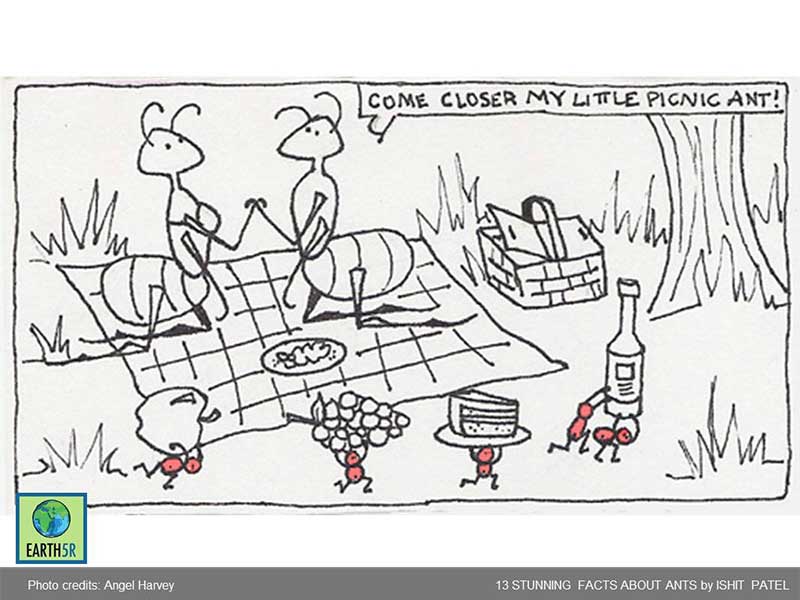 Ishit is a student of 2nd year, Mechanical Engineering from Gandhinagar. He has been one of the initiators of “clean brigade” – a city based group of students who gather and clean a spot on a weekly basis in Gandhinagar. Contributing to the environment on a day to day basis is what he is passionate about. At Earth5R Ishit is involved in community projects and he writes for EarthJournal.

3 Replies to "THESE 13 ANT FACTS WILL BLOW YOUR MIND!"