The wrecking of amazon rainforest has created a disturbing drought in Brazil- worst drought in 80 years. The Cantareira system, that provides greater Sao Paulo with maximum of its water, has the lowest water level ever. 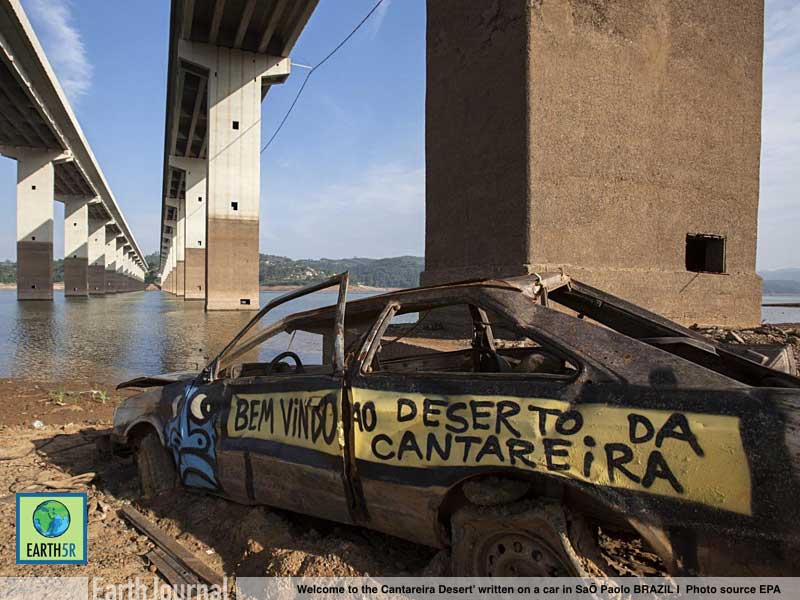 ‘Welcome to the Cantareira desert’ in Portuguese written on a car which was once underwater at the Atibainha dam, part of the Cantareira reservoir near Sao Paolo Brazil. Photo credit EPA

For quite some time now we have been hearing and reading about the importance of water conservation, harvesting and recycling. From time to time newspapers provide us with updated information about the water levels in the lakes and reservoirs that supply water. There are headlines about dreaded water cuts and accompanying such reports are scarcity statistics which can unnerve even an optimist. Are such articles accurate? Do those numbers serve as a wake-up call? Let’s take a look at some of the facts: 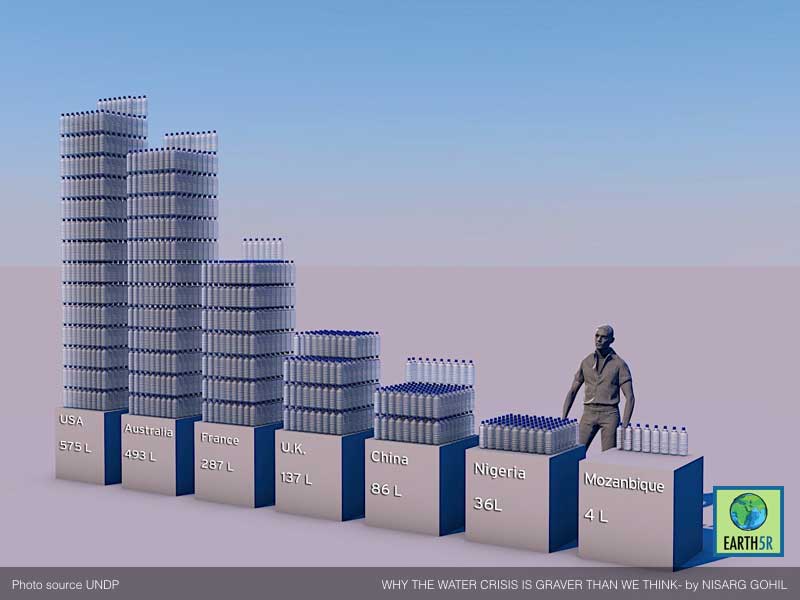 These are just some basic facts. You may have read them a dozen times before and might have not given it a second thought. But I am sure that the next set of pictures that you are about to see, will make you think twice before you write off the severity of the situation.

Water availability is expected to decrease in many regions. Yet future global agricultural water consumption alone is estimated to increase by ~19% by 2050, and will be even greater in the absence of any technological progress or policy intervention.

The first picture depicts the water scenario as per 2007. Most of the countries in the world do not show any sort of vulnerability towards water availability. The countries with vulnerability are China, Uzbekistan, Afghanistan, Iraq, Germany, U.K, Niger, Nigeria, Ghana, Sudan & Ethiopia. A lesser number of countries have water stress. Some of these are India, Pakistan, Poland, and South Africa. Water scarcity is prevalent mainly in Northern Africa. 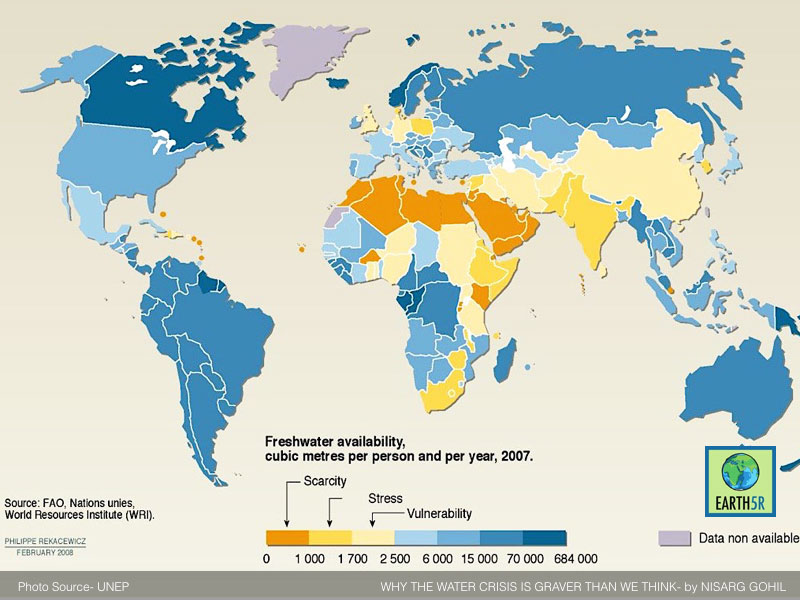 Of course, the situation today is bad. But it is far more alarming when you look at the next picture.

The next photo is a projection of water stress for the year 2030. You can see a lot of red in the picture, but it is not all that rosy. The United States finds itself in deep water crisis, encompassing almost the entire country. Even other parts of North America (some parts of Canada) are projected to find themselves scarce in water availability. 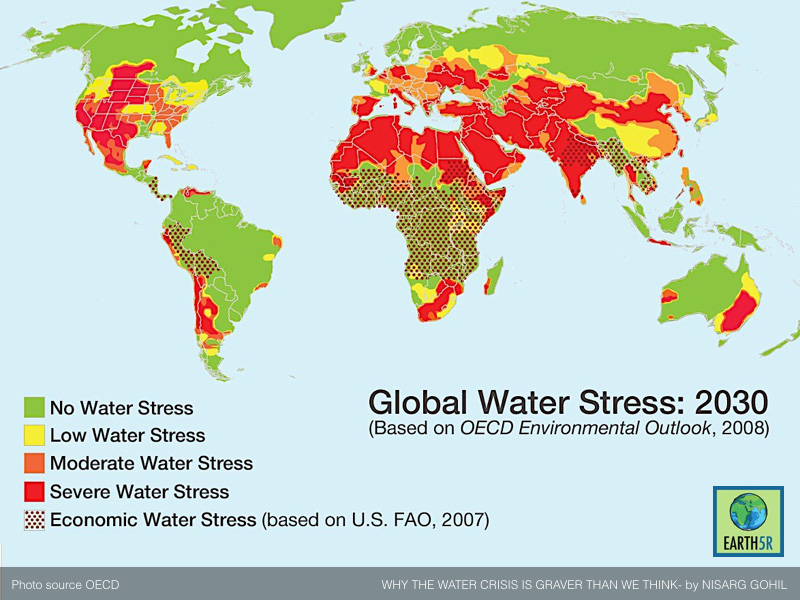 Regions in Africa which did not have water shortages as per 2007 are projected to have economic water stress by 2030. The entire continent of Africa, the Middle East and even the Indian Subcontinent are expected to face moderate to high water stress levels. In Europe, Spain, Italy, Sweden, Finland, Ukraine are expected to face high water stress levels. Even though Australia seems to have a huge green patch in terms of stress, it is expected to face high stress levels in regions where majority of the population resides. If we were to start talking about every country individually, by the time we could finish educating you about the projected scenarios it would already be 2030! 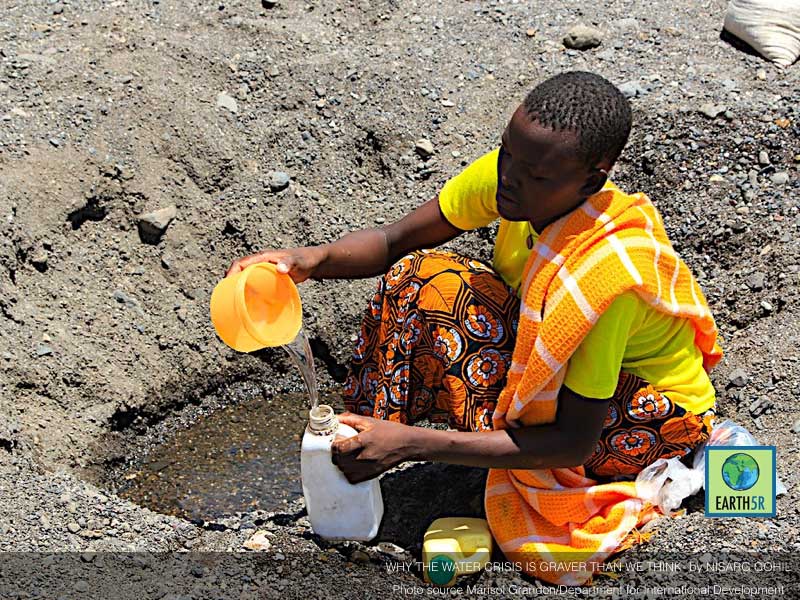 Can we do something about it? Yes, We Can! Here are some simple but effective changes that all of us can make and add a drop to the ocean (quite literally!)

Get out of the shower quickly! Yes, we all do major life decision making in the shower but did you know that an average shower head uses 5 gallons per minute (that’s around 15 liters!). So, keep the shower time under 5 minutes. You can still think, but with the shower off you’ll be doing a lot of people good.

Use the Flush only for what it is meant to do

Stop treating the toilet as a waste-bin. Yes, there are people who do that! Even high efficiency toilets use at least 6 liters of water per flush. Imagine the amount of water saved if someone stopped discarding their cigarette butt or pieces of papers in the toilet.

Check the faucet and shower heads for faulty fittings. It is possible to save around 150 gallons (450 liters approx.) if a faulty connection is corrected.

Avoid the Use of Running Taps wherever possible

One of the major culprits for water wastage is running taps during a number of chores. Shutting off the tap while shaving, brushing, or cleaning vegetables can save about 8-10 liters of water for each of these activities. This means that it is possible to save around 3500 liters of water/year just by turning off the tap while brushing.
While washing dishes manually, do not rinse them under running water. Fill half the sink and use that water to rinse the dishes. Rather, avoid running water taps for any chore.

Saving Water in the Kitchen

Water is a necessity while cooking. But with smart use, one can save water in this task as well. For example: The water used for boiling the pasta can be used to water the plants once it cools down. I’m sure the plants won’t mind the pasta-water!
Don’t defrost food under running water. Instead put it overnight in the refrigerator and that’ll do the same work and conserve water.

Sprinklers use a hell lot of water. Consumption can be reduced considerably if sprinkling is done early in the morning. This reduces evaporation losses due to wind and high temperatures. Also, compared to auto-sprinklers, watering the lawn by hand utilizes almost half the water in comparison. If sprinklers are used, then highly water-efficient systems using drip and micro irrigation should be installed. Sprinkler systems should also have rain sensors which override the sprinkling cycle when there has been sufficient rainfall.
Do not over fertilize your lawn. Chemical fertilizers increase the requirement of water. Water insoluble and sustained release fertilizers can be used as an alternative.

Educate! C’mon people! Let’s be responsible earthlings and enlighten our fellow citizens who do not realize the importance of water conservation.
Start with children. The younger a person is, the more impressionable he/she is. Teach children about the importance of saving water right since they’re young.
Conduct community events and awareness programs in order to involve people in the fight to conserve water. Also, encourage the schools and local government bodies to do their bit and urge them to develop and promote a water conservation model.
Rain water harvesting is a conservation technique which, if utilised to the fullest can be very helpful in solving the problem. It needs to be promoted and implemented at every level.
And lastly, don’t think that your small efforts do not mean anything. Any effort, however small can go a long way!

“Running the water during your shave wastes more than what one person needs for drinking water for a week.”

In conclusion, I would like to say that these facts and figures are enough proof that the water scenario prevalent throughout the world is not as rosy as it is portrayed. It urges one to think about the amount of water that is being wasted by humans. It reflects on the fact that we, as “the most intelligent species” have failed to respect, protect and understand the importance of the very resource that is responsible for life as we know it. Yet, through sustainable and prudent use, there is still hope that this crisis can, if not averted entirely, be contained to the fullest extent.

Nisarg Gohil is a final year Chemical Engineering student at Datta Meghe College of Engineering, Navi Mumbai. “The problem lies in the psychology of the people rather than the way of life. Change the person’s mind-set more than changing his surroundings.” These principles of his resonate with the 5R’s of Earth5R and that's how he started his journey as Volunteer Environmentalist.