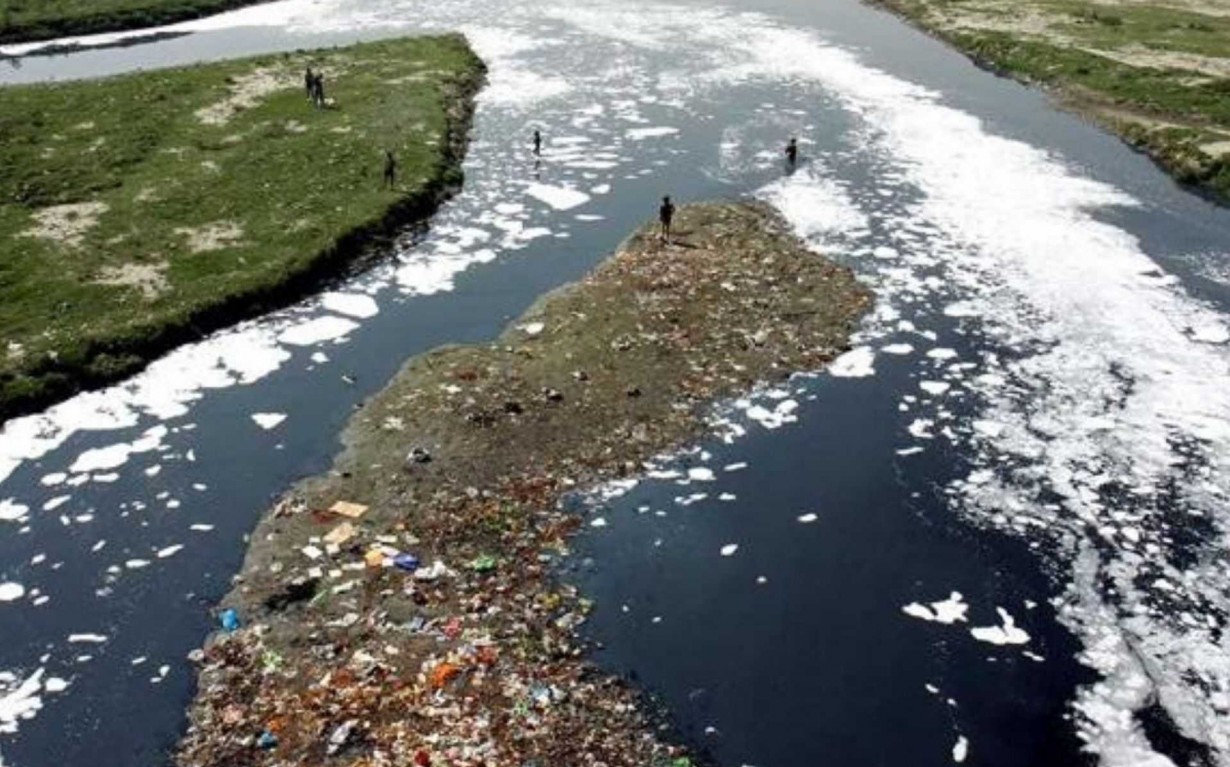 Every Drop Counts : An Answer to Sutlej River Pollution, India

The Red River is called the Sutlej. The river is the tributary of the Indus River to the east. The origin of the Sutlej River is located in the Kailash Mountain Range district, near Lake Rakhastal in Tibet.

The extent of the pollution caused in Sutlej in Punjab can be determined by the fact that the state disposes of around 2000 kiloliters of wastewater per day in the river, apart from the enormous amount of industrial effluents mainly via Buddha Nullah in Ludhiana, which makes it practically a dead river as it crosses the city.

Jalandhar’s untreated industrial effluents and municipal waste are also a primary cause of the Sutlej pollution. Jalandhar initially had two drains, the Kala Sangya drain, and the Jamsher drain, which was supposed to transfer rainwater into the Sutlej.

Now, rainwater has become secondary, all they bring is a highly toxic poisonous matter, resulting in contamination of Class E levels in the waters of Sutlej.

Pollution in River Sutlej due to uncontrolled industrial discharge (Jagran, The Tribune)

Buddha Nullah is among Ludhiana ‘s oldest rivulets. There was a time when it was pollution-free and was washed in pure water. Today, it’s been one of the most polluted bodies of water. The nullah condition is due to industries the release of its chemical and non-biodegradable waste.

The water in the nullah is rich in toxins, the administration has initiated several projects to clean up the nullah, but they all collapsed. In addition,  the stinks are intolerable around the Nullah. Citizens who live next to the nullah suffer from many health problems since the nullah ‘s water merges with Sutlej and is used in some rural areas by many for crop irrigation, household works, and even for drinking.

Taking into account the deterioration of River Sutlej’s water quality, the Government of Punjab (GOP) initiated action in 2008 to identify the sources of its pollution, in coordination with the Punjab Pollution Control Board (PPCB). Following the year 2008, meetings were held regularly under the chairmanship of Chief Minister Punjab.

A total of 101 STPs (Sewage Treatment Plant) have to be installed out of 65 towns that discharge their wastewater into the Sutlej River, out of which 59 STPs have already been installed, 8 are under installation and the remaining 34 are under different planning stages.

Ludhiana City falls within the Sutlej River catchment area and contributes significantly to the water pollution of the Sutlej River through Buddha Nallah which passes through the heart of the city of Ludhiana.

Punjab Pollution Control Board took it as a challenge as well as an opportunity, in order to achieve significant improvement in environmental quality and pave the road for sustainable development in the area.

A comprehensive remedial environmental action plan titled “Ludhiana Action Plan regarding abatement of Environmental Pollution in Critical Polluted Areas of Ludhiana” was prepared in consultation with all the stakeholders, including Industrial Associations. The same has been regularly monitored at the State and District level.

School students along with city-based NGO, RBS roots, conducted a cleanliness drive at the Jalandhar bypass at the Sutlej River. As part of the anniversary celebrations for the birth of Shaheed Bhagat Singh, the clean-up exercise was attended by Bal Bharti public school students in Dugri Phase 2, BCM, Shastri Nagar, and Spring Dale Public School.

Earlier, the NGO had conducted a drive at the same location but its representatives say the river continues to pollute amid awareness campaigns, commuters, and effluent discharge from industries.

The representatives of the NGO claimed that they would ask the administration to build meshes on either side of the river to avoid the throwing of contaminants into it.

Dr. Amardeep Singh Bains, the founder of RBS roots, said: “Students took out polythene containers, broken photo frames, pictures of gurus and gods and many other items from the river. Pollution also suggests that industrial effluents are being discharged into the river through the Buddha nallah.”

THE DEGRADING WATER QUALITY OF SUTLEJ

Ludhiana remains Sutlej’s worst polluter, as both domestic and industrial wastes are still being dumped in the river. 12 City outlets release untreated wastewater from industry and households into the Budhha Nullah, which in turn dumps wastewater in Sutlej.

In July 2016, the Central Pollution Control Board (CPCB) sought a response from the Ludhiana Municipal Corporation (LMC) based on the report of the State Pollution Control Board. The twelve sources combined release more than 2,000 kiloliters of sewage daily which contain harmful contaminants such as industrial products, medical waste, and untreated fecal sludge that went into the water.

Despite the flow of industrial pollutants, people are dependent on river Sutlej (Swachh India)

Despite the CPCB naming 11 grossly polluting companies directly responsible for dumping waste into the state’s rivers and lakes in 2013, no steps were taken to curb their waste disposal methods. In 2011, Punjab’s government received a grant of Rs. 1,000 crore from the Central Government to clean up its rivers. Yet the polluting industrial units remain booming and little has been done to resolve the problems of the contaminated rivers of the state.

MEASURES WHICH CAN BE TAKEN TO REDUCE POLLUTION

The state government, the state pollution control board, and municipal councils all failed to fix the river pollution issue in Punjab. The massively polluting factories keep pouring waste into the rivers. The same water is used to drink, irrigate, as well as pollute the state’s groundwater supplies.

The Sutlej River is in really poor shape. We must acknowledge that, and figure out strategies to clean them up. There are two reasons for pollution, one of which is industrial pollution, the other is untreated sewage or urban waste which flows into rivers.

While the advantages and benefits of rivers for communities are obvious, what we still fail to see is that human actions may have detrimental impacts on rivers over a length of a river. Of particular significance is water pollution caused by household, commercial and industrial activities-solid wastes, chemicals, greywater and sewage, etc.-affecting water quality and influencing its use for drinking and as a habitat for plants and animals.

We need to focus on conserving water in our homes, factories, and farms. Each company has to see to it that it has and operates pollution control equipment. If you are not handling the water it has to be recognized as a felony. We need public ostracising of people who don’t treat their water. Just as black money has become a bad word now. It ‘s crucial not to view your water and air as evil.

There’s enough water to meet the growing needs of the world, but statistics and projections highlight that it won’t be achievable without changing dramatically the way water is used, managed and shared.

Change in the system level, including the use of new enterprise models, will be necessary to maximize value extraction from water cycles at all scales (river basin, city, industrial unit, building) to increase efficiency in the use of water resources and to prevent further environmental degradation.

Natural structures encourage a circular economy, so its basis lies in -thinking framework. Wherever possible, renewable resources should be used, natural systems should be preserved or improved; waste and negative impacts should be devised.

Materials, energy, goods, and components are handled in loops and maintained at their highest intrinsic value possible.

We should be cutting off water bodies from all drainage systems. The best method is for water to flow in closed loops. Under this model, water is constantly reused, with maximum value maintained. This is just one example of what we call the “circular economy.”

By establishing circular economy based programs that have active collaborations with local stakeholders such as city administrations, local community, universities and educational agencies, private sector companies, and NGOs / NPOs, local problems like bad waste management can be turned into opportunities for the local community.

Program efforts to clean River Sutlej should be focusing on integrating all society components that include people as much as technology and nature and  creating local job opportunities thereby creating stronger community ownership which will create a lasting change.

The Circular Economy Crisis in Buenos ...

What is Earth day and What ...