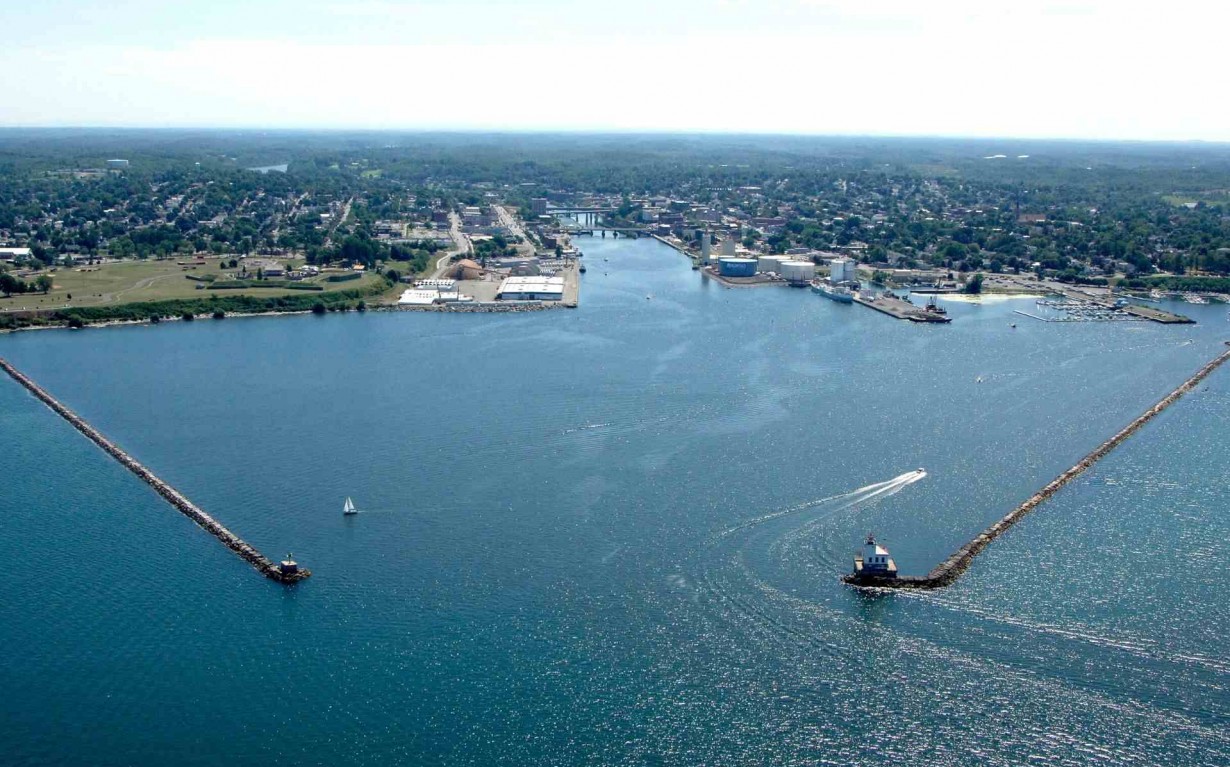 Environmental Lessons From the Oswego River’s Past

The Oswego River is 23 miles long and is formed from the intersection of the Oneida and Seneca Rivers in central New York State. The Oswego flows from Three Rivers Point through the municipalities of Phoenix, Himansville, Minetto, Seneca Hill, and Oswego before emptying out into Lake Ontario.

Extending over 5000 square miles of land, the Oswego’s watershed absorbs stormwater runoff from millions of acres of farmland as well as from the urban Syracuse area. There are six dams and eight locks along the Oswego River. More than 4.2 billion gallons of water flow through the river each day and over 2 million people live in the region covered by the basin.

The Oswego is a central water line in the region that historically catalyzed a great deal of economic activity. The Onondaga, Iroquois, and Clackamas lived along the river, taking advantage of the flourishing wildlife and game that the river basin afforded.

The name of the river comes from an indigenous Onondaga term “OSH – WE – GEH”, translated as “river’s mouth”.

Later on, a host of water-powered flour, woolen, and paper mills built by settlers cropped up along the river banks, powered by the Oswego’s fast currents. Yet the river’s economic centrality also brought about its damage and exploitation.

Oswego cloth factory along the banks of the river, built in the 1870s (Hudson Valley Ruins)

From 1850-1875, the Oswego Canal, which linked the economically bustling Erie Canal with Lake Ontario, made the river basin an attractive location for manufacturers to set up operations. With little regard for the surrounding environment, salt producers and metal processing plants often dumped the by-products of their manufacturing assemblies directly into the watershed.

Furthermore, up until the construction of sewage treatment plants in the 1960s, raw sewage was regularly dumped into the Oswego River. The combination of untreated wastewater and manufacturing by-products made the harbor area of the river mouth toxic and threatened the water supply of local citizens.

There are a variety of fish that are commonly found in the Oswego River. These include chinook salmon, walleye, smallmouth bass, steelhead trout, and yellow perch among many others. Nearby residents frequently come to the banks of the Oswego to try their luck at catching the many fish that swim in the river’s waters.

The fall run of chinook salmon is a particularly valued prize that draws many to Oswego and Fulton’s streets.

THE OSWEGO RIVER AND LAKE ONTARIO

Besides the Niagara River, the Oswego watershed is the second largest tributary to Lake Ontario. Consequently, pollutants in the river from sewage discharge, stormwater and agricultural runoff, and industrial dumping, flow out into the great lake and contaminate its ecosystem.

They found that four major pollutants in Lake Ontario – mirex, PCBs, dioxin, and mercury  – likely came from the Oswego’s watershed.

The Oswego River basin was declared an Area of Concern (AOC) by the Environmental Protection Agency (EPA) in 1987. High levels of toxic pollutants such as PCBs (polychlorinated biphenyls), oil, and cyanide were found in excess of recommended safety standards.

The EPA attributed buildup of toxic materials to be the consequence of wastewater contamination, industrial dumping, and polluted stormwater runoff. For instance, a state of New York report found that one chemical manufacturing plant regularly dumped a host of pollutants including sodium chloride, calcium chloride, and mercury wastes directly into the river.

The Oswego Westside sewage treatment plant would release wastewater directly into the harbor while the Niagara Mohawk Power Company would discharge its cooling waters there as well. These effluents introduced harmful chemicals and compounds into the river’s water, threatening riparian biodiversity and the health of Lake Ontario.

Plastic pollution has become a major ecological issue in the Great Lakes region and has also impacted the Oswego watershed. The Plastic Lakes Project estimates that over 3 million pounds of plastic waste ends up in Lake Ontario each year.

Scientists point to the accumulation of microplastics from plastic littering as one of the chief culprits behind this pollution.

Everything from disposable plastic bags to single-use water bottles and wrappers have been found in abundance along the river’s banks and within the lake’s waters. 80% of all litter around the Great Lake shores is plastic debris and as these pieces of waste enter the water, they break down under the sun and waves.

Yet, the vast majority of microplastics comes from polyester clothing as plastic fibers come off when washed in laundry machines and then enter the lakes.

ENVIRONMENTAL IMPACTS OF HUMAN ACTIVITY ON THE OSWEGO

The discharge of a variety of effluents and the many structural modifications made along the Oswego’s course resulted in a series of negative ecological consequences. Native fish populations declined as certain portions of the river close to the Varick dam would become periodically dry and fish eggs died.

Furthermore, the release of polychlorinated biphenyls (PCBs) by manufacturers into the Oswego River and Lake Ontario posed a dangerous threat to local residents.

According to the National Institutes of Health, PCBs are commonly found in coolants and insulation. They are associated with health impairments like infertility, neurobehavioral changes in children, and can even cause comas or death.

The excess release of phosphorus by sewage treatment plants in the Oswego River has also contributed to a series of dramatic algae blooms across Lake Ontario.

The US Geological Survey notes that high concentrations of phosphorus lead to the removal of oxygen from lake waters via a process known as eutrophication. Without the requisite amount of oxygen, animals die off and large plant growths spread across the lake surface.

As plastics continue to accumulate in the bodies of the Oswego watershed and Lake Ontario region. They become ingested by local fish and marine animals where they can cause immense harm.

Reports have indicated that plastics alter animal feeding behaviors, reduce fertility, and can even lead to death. Yet the impacts of plastic pollution don’t stop at nature’s doorstep.

Through the process of biological magnification, particles of plastic buildup as animals progress through the food chain.

When humans consume fish inundated with high levels of plastic, they are exposing themselves to a slew of dangerous health conditions.

THE THREAT OF CONTAMINATED WATER

Fecal-contaminated water presents a clear health risk to humans, animals, and plants. Troublingly, the Oswego River seems to be beset by a never-ending struggle with raw sewage entering its freshwater.

Untreated wastewater poses an imminent threat to wildlife, introducing harmful bacteria and pathogens into aquatic ecosystems. The impact of raw sewage on humans is equally as concerning. Wastewater is a known culprit behind cholera, salmonella, and gastroenteritis.

A series of private and civil society initiatives have cropped up to address pollution in the Oswego watershed region and Lake Ontario. For instance, the Brookfield Power company which operates the Varick Dam agreed to construct fish passage systems and maintain minimum bypass flows.

This enabled native fish populations to lay their eggs and hatch in due course without the threat of the river running dry as it had in previous years.

A variety of administrative actors have been involved in the preservation of Oswego. They include the New York State Department of Environmental Conservation, the Environmental Protection Agency, Ontario’s provincial government and local municipal authorities.

The Oswego River Basin was the first of 26 areas of concern (AOC) designated by the EPA to be delisted after some significant steps were taken to address river pollution.

Through the engagement of regional authorities, businesses, and local communities, many positive actions improved the water quality and riparian habitat of the Oswego region.

Under an EPA remedial action plan, stricter limits were set on the discharge of harmful pollutants like PCBs and phosphorus while simultaneous improvements were made to monitoring practices.

In 2017, the federal government banned the use of microplastics in soaps, shampoos, and facial scrubs. Additionally, the New York State Legislature decided to ban single-use plastic bags throughout New York in 2019.

Both of these interventions are expected to help reduce the amount of plastic in the river’s waters. The city of Oswego even committed to investing $87 million in modernizing its sewage program and updating its operations back in 2014.

SHORTCOMINGS OF THE ADMINISTRATION

Despite these encouraging strides, sewage and plastics continue to plague the river. Although there have been periods of improvement since the low point of the 1960s, numerous administration interventions have resulted in only sporadic progress.

As a designated Area of Concern, the Oswego was mandated to undergo the implementation of a 1991 Remedial Action Plan to bring the river into compliance with water quality standards. But it seems that things aren’t working the way they were expected to.

Regional authorities seem unable to follow through on meaningful, long-term investments and community engagements to address these life-threatening issues.

A QUESTION OF APPROACH: LOOKING TOWARDS THE FUTURE

There is an evident need for meaningful conservation action in the Oswego region. The improper use of chemical and plastic resources has threatened the biodiversity of the Great Lakes while posing a direct threat to human health.

For all the millions the administration has spent attempting to address this issue, daunting challenges remain.

Some leading environmental advocates suggest that this is a question of approach. Initiatives in the Oswego River and Lake Ontario thus far have concentrated on mitigating symptoms of plastic pollutants.

Prominent researchers, like Tamara Galloway of the University of Exeter, explained that the most advisable solutions will look towards addressing the issue at its source; a broken economic model.

Plastics are very hard to reincorporate back into the natural environment, thus making them an unsustainable material.

However, under an ideal circular economic model, all resources that are used in the manufacturing and consumption process are able to be cycled back into the natural world.

Such a system minimizes waste and ensures that products are ultimately used for longer.

In the case of the Oswego River and Lake Ontario, everyday citizens are an essential part of the solution.

Recent Earth5R waste reduction initiatives in the Mithi River in Mumbai and recycling trainings in Palghar indicate the positive impact of pollution awareness and education in engaging local communities.

By taking simple steps like minimizing the use of single-use plastic products, incorporating reusable materials into daily routines, and taking care of the dangers of microfiber plastic pollution present in laundry, every person can be part of a solution towards a better future.

EarthTalk With Motor Bikers at Lucknow