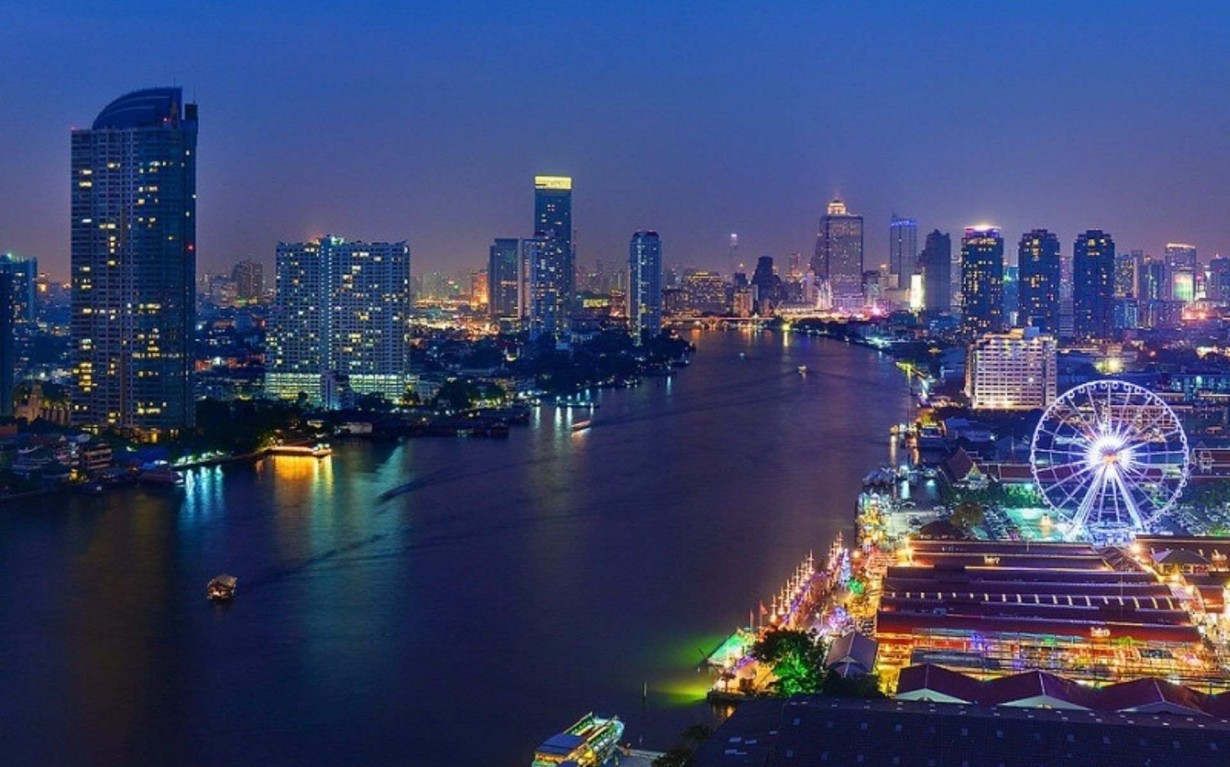 Through Bangkok, The City of Angels: The Polluted Chao Phraya

In bustling Thailand’s capital city of Bangkok, 948 canals flow into the Chao Phraya River, and from there to the sea. Since 2015, over 387,000 tonnes of trash have been removed from the city’s canals, and those that are not, got washed away into the Gulf of Thailand.

Chao Phraya River begins at Nakhon Sawan province and flows 372 km south through Bangkok and exits in the Gulf of Thailand. In Bangkok, it is a major transportation network of river buses, cross-river ferries, and water taxis (“longtails”), with more than 15 boat lines operating on the rivers and canals of the city.

Chao Phraya River from above (Traveldailynews.asia)

Culture wise, the Chao Phraya is of high significance as a survey done by the Department of City Planning team found more than 200 sites which are to be preserved as national heritage sites along the river.

As Bangkok is located in the Chao Phraya Sub-basin, it made this part of Chao Phraya the most important sub-basin economically, contributing 78.2% of the total GDP of the Basin.

WHAT WAS THERE ONCE

The mainstream of the Chao Phraya River was home to about 190 native fish species. Due to extensive habitat destruction caused by pollution, dams, and irrigation drainage, it has been estimated that only 30 native fish species are able to reproduce.

The catfish, Platytropius siamensis, is endemic to Chao Phraya and has not been recorded since the 1970s and is considered extinct. Giant barb, giant pangasius and giant freshwater stingray which are three of the largest freshwater fish in the world that are native to Chao Phraya are also seriously threatened and endangered.

The Lower Chao Phraya, where Bangkok is situated, is one of the top 5 water sources

with poor water quality in Thailand, according to PCD (Pollution Control Department).

In 2018, the lower Chao Phraya was ranked first by PCD as the province with the poorest water quality index only scoring 35% out of 100%.

There are 30,000 industrial facilities along the Chao-Phraya River, which run through Thailand’s major cities – including the capital, Bangkok – a city of around 14 million people. This factor contributes to the poor quality of the water.

Roughly one-third of the country’s output from industrial parks is produced in Bangkok.

In a 2016 PCD report, the average level of dissolved oxygen in the lower Chao Phraya was 1.9 mg/L when the required standard for a good water body is 5 mg/L. The NH3-N (Ammoniacal nitrogen)  level was also noted to be 0.1-1.5 mg/L when the permissible limit is 0.5 mg/L.

The abundance of NH3-N leads to the growth of water hyacinth in several points in Chao Phraya River which is bad for aquatic life as it covers the water surface not allowing oxygen to penetrate hence, the low level of dissolved oxygen.

Limited affordable housing in the urban areas has made those with low incomes to have informal settlements along the canals. As time goes by, canals become more densely populated, which contributes to household wastewater discharge – further deteriorating water quality.

For instance, in 2001, domestic wastewater made up 81% of water pollution in terms of BOD (Biological Oxygen Demand) load coming from the Bangkok Metropolitan Area Chao Phraya sub-basin. And a report in 2007 stated that only 13% of domestic waste is treated.

According to the U.S EPA, water above the thresholds of 2,300 mpn/100ml TCB and 400 mpn/100ml FCB were associated with gastrointestinal illnesses.

Not only wastewater discharges, but plastic waste has also always been a problem in Thailand. An average Thai uses approximately 8 plastic bags a day which adds up to 500 million plastic bags per day for the whole nation.

In 2019, an average of 2,115 tonnes of plastic was thrown away in Bangkok per day. Not all of these plastics are disposed of properly, some got washed into the river or are even deliberately thrown in.

These wastes – if not taken out – are going to eventually end up in the ocean as Chao Phraya flows to the Gulf of Thailand. 80% of the plastic waste in the oceans originates from land and eventually polluting beaches and harming marine animals.

CULTURE AND WASTE: FLOATING OF KRATHONG

Loy Krathong is a festival of lights where people gather near water bodies to pay respect to the water goddess. They float (Loy) Lotus shaped craft (Krathong) decorated with flowers and lit up candles and incense on top of it into the water.

In 2017, city officials of Bangkok fished out 811,945 Krathong from the waterways of which 51,964 Krathong were made from non-biodegradable styrofoam.

This is a big problem as styrofoam is slow to degrade, and if disposed of improperly, the foam can leach chemicals into the environment harming water sources.

The plastic bag monster in front of a 7-11 store (coconuts.co)

YET, THE PROBLEM PERSIST

It’s obvious that plastic pollution is still a problem in the Chao Phraya river as clean-ups done always found lots of plastics and other wastes.

The problem of pollution in lower Chao Phraya won’t be solved unless there is a community awareness on the problem especially for the informal settlements along the river which don’t have proper sewage management.
Even with the ban of plastic bags in major stores, the abundance of street vendors (approximately, more than 500,000 street vendors) in Bangkok City alone, still use plastic and most of the time even double bags the parcel.

Streetfood vendor in the process of double-bagging (Nicolas Axelrod/Bloomberg)

Citizens are not encouraged to segregate waste and even when they do, there is no proper place for the disposal of the segregated waste.

According to one study, 64% of the Thai population do not sort their rubbish

In addition, 40% of the trash that is generated could be recycled, but only 18% of it is actually recycled.

A circular economy is an economic system aimed at eliminating waste while reducing the continual use of resources. It combines economic, environmental, and social aspects to solve existing problems. It is breaking with the model of the linear economy, by proposing to transform waste into recycled raw material for product design or other uses.

Community along the banks of the river and also all over Bangkok can apply the model by:

Bottle caps collected by the Earth5R team to be upcycled into new useful products, such as benches (Earth5R)

Awareness on The Ganga River Pollution ...