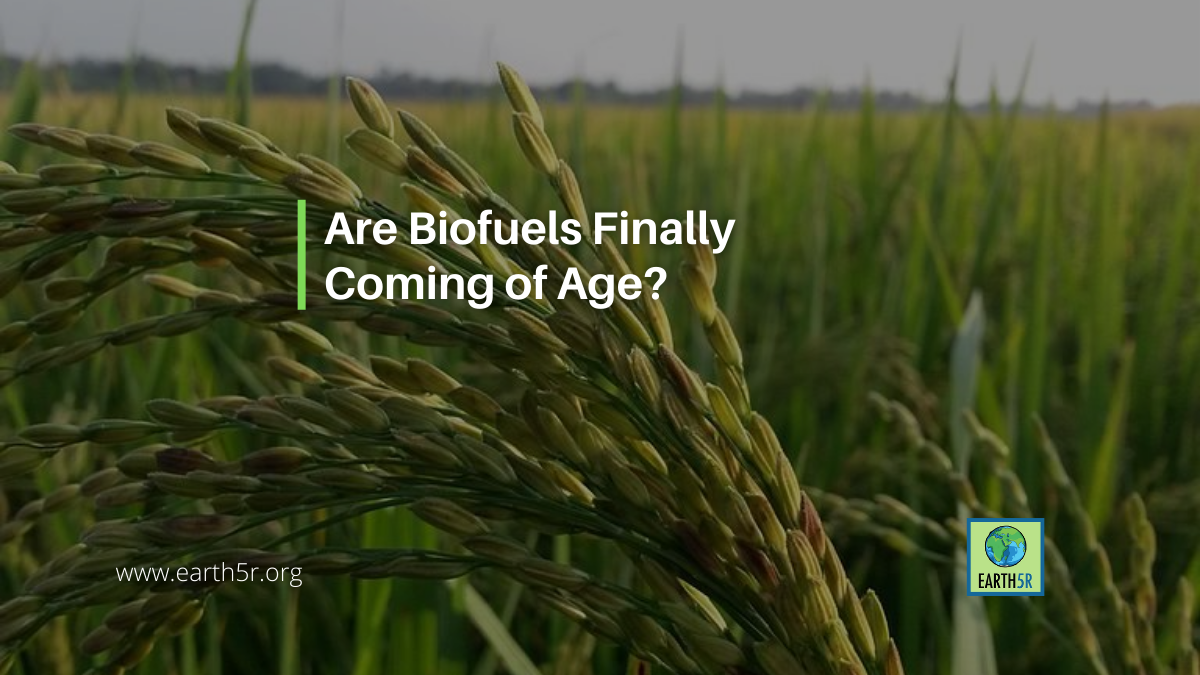 Are Biofuels Finally Coming of Age?

Fossil fuels kickstarted the industrial age for humanity. However, humans now face the possibility of running out of these fuels by the end of this century. So, where do industries that are heavily dependent on such fuels look to for equivalent energy sources? The answer lies in the global movement towards utilising renewable energies provided by solar, hydro, and wind-power, along with biofuels.

The main advantages of biofuels over conventional fossil fuels is that the world is unlikely to deplete its sources of biofuels, as they are renewable. In addition, most biofuels have lower greenhouse gas emissions than fossil fuels. For many countries such as India, domestic biofuel production can reduce the consumption of imported fossil fuels, which provides economic gains, in addition to shielding against supply disruptions and fuel price fluctuations. Despite these advantages, the environmental sustainability of biofuel production due to its negative effects on food security and land-use changes, remains unclear.

If India is to expand its biofuel sector, the approach needs to be multipronged and rooted in sustainability, recommend experts.

Biofuels are combustible materials that are produced over short spans of time from biomass, rather than over millions of years such as fossil fuels. The term ‘biofuel’ is considered to be a catchall term to define any fuel made from organic matter (plant matter, microorganisms, or animal waste).

Although ‘biofuel’ is often used interchangeably with ‘biomass’ (since some biomass like wood and biochar can be burned as fuel), some agencies like the U.S. Energy Information Administration (EIA) and the European Commission define biofuels as “liquid or gaseous fuels and blending components mostly used as transportation fuels that are produced from biomass materials called feedstocks”. However, biofuels may also be used for heating or generating electricity.

Promit Mookherjee, an associate fellow at the Centre for Economy and Growth in the Observer Research Foundation, says that in India, solar and wind energy are big players in the renewable energy sector for electricity. “Although there are some waste-to-energy initiatives that rely on biofuels to generate electricity, biofuels, on the whole have achieved greater traction as an alternate energy source in the transport sector.”

The most common biofuels now are bioalcohols such as ethanol, propanol, and butanol (a substitute for petrol/gasoline); biodiesel (a substitute for diesel); and bio-oils (substitutes for kerosene). Biofuels are also divided into three categories depending on their origin and production technologies. First generation (1G) biofuels are produced from consumable food items containing starch (rice and wheat) and sugar (beets and sugarcane) for bioalcohols, or vegetable oils for biodiesel. However, the yields of 1G biofuels are low and can have negative impacts on food security. Second generation (2G) biofuels are mainly obtained from non-food feedstocks such as forest/industry/agricultural wastes and waste or used vegetable oils. However, as of now, commercial scale 2G biofuel production is very limited. Third generation (3G) biofuels, known as ‘algae fuel or oilage’, are derived from algae in the form of both, biodiesel and bioalcohols. Although the yield of 3G biofuels is approximately 10 times higher than 2G biofuels, producing adequate algal biomass and scaling up extraction techniques are as yet unresolved challenges. In addition, 3G biofuel production and greenhouse gas emissions are at least one order of magnitude higher than those of fossil fuels. Fourth generation (4G) biofuels such as biohydrogen – which are still at a conceptual research stage – aim to combine carbon dioxide capture through metabolically engineered plants and microorganisms with the production of biofuels.

What is India’s history with biofuels?

The history of biofuels goes back to the very beginning of the automotive industry, in the 1890s, when Rudolf Diesel used peanut oil to test his first engine. Biofuels were considered to be viable transport fuels, until after the second world war, when petroleum-derived fuel became cheaper. However, after the oil crisis in the 1970s, interest in biofuels began to revive in most nations over concerns in energy security.A decade ago, these concerns were further joined by climate change concerns.

India’s first policy steps towards including liquid biofuels in its energy sector began with the Ethanol Blending Programme in 2002 that mandated a 5% blending of ethanol (E5) in petrol in nine states and four union territories by January 2003.

However, due to shortages in bioethanol supplies in 2004, the mandate was amended to “requiring E5 blending only when adequate ethanol supplies were available”. In 2006, the 5% mandate was expanded to cover 20 states and eight union territories, but again failed due to bioethanol shortages. Despite these setbacks, in 2009, the Indian government launched the National Biofuel Policy that mandated an ambitious country-wide blending rate of 20% for both, bioethanol and biodiesel, to be achieved by 2017. The policy also identified the seeds of a jatropha species (jatropha curcas) as a source of non-edible oil for biodiesel production and launched a large-scale programme to cultivate jatropha on fallow/degraded lands and government/community wastelands. A native to the American tropics, jatropha is an extremely hardy plant that grows in places where most plants would die: on degraded and dry plots. The seeds of the plant can be processed into lesser polluting biodiesel.

The main features of the 2009 policy were:  to use only non-food feedstocks raised on wastelands unsuited to agriculture to avoid conflicts between energy production and food security; cultivation of non-edible oil seeds to be encouraged through minimum support prices and other financial incentives; and to promote research and development of biofuel production for 2G biofuels.

But the 2009 policy ran into several issues. Firstly, although amendments to this policy have now allowed the direct use of sugarcane juice (instead of just molasses as per the previous policies), and introduced other measures – such as minimum support prices and allowing alternate routes of ethanol production – ethanol blending rates only reached 5% by 2018. As of 2021, the Indian government reports a blending rate of 8.1% of ethanol in petrol.

Secondly, the seed yields from jatropha plantations were much poorer than predicted; this, combined with the high cost of plantation maintenance, and several other issues with scaling, has made biodiesel production from jatropha economically unviable. Currently, biodiesel blending in India is less than 0.1%, despite the use of multiple feedstocks for production.

Despite these setbacks, a SpiceJet plane made history in the Indian transport sector by flying 285 kilometres from Dehradun to New Delhi propelled by biofuel (a 25% bioethanol blend). Although, this did give the Indian biofuel sector some hope, it was not enough to boost the struggling industry into any significant success.

What is India’s current status with respect to biofuels?

The latest update to India’s biofuel policy, made in 2018, aims to have country-wide blending rates of 20% ethanol and 5% biodiesel by 2030. Just as in all previous policies, the 2018 policy also focused on using 2G technologies with agricultural/industrial waste products.

However, in 2021–2022 amendments to this policy, there have been stark changes in the policy directives. The government now aims to achieve a blending target of 20% ethanol by 2025 rather than 2030. According to the Roadmap for ethanol blending in India 2020-2025 report from NITI Aayog, India will need to increase ethanol production capacity from the expected 3.3 billion litres (in 2020–2021) to at least 10.2 billion litres (5.5 billion litres from sugarcane and 4.7 billion litres from grains) by 2025.

Mookherjee says that these targets can have very serious effects on food security and the agricultural sector. “On one hand, it may benefit farmers who will have a ready market for their crops and receive higher prices for their products, but on the other hand, it could also lead to massive land-use changes that could negate the carbon reduction achieved by switching to biofuels.”

A 2020 study in Environmental Research shows that if India is to meet its 20% ethanol blending target with molasses alone, it would require an additional 1,320 million tonnes of sugarcane, which would require another 19 million hectares of land under sugarcane cultivation. Given that sugarcane cultivation is highly water and fertiliser-intensive, this could lead to a heavy burden on groundwater sources and is unlikely to be sustainable.

In a 2022 Issue Brief from the Observer Research Foundation, Mookherjee also points out how rice and maize may not be sustainable options for biofuel production in the long term. It will take roughly 17 million tonnes of food grains to meet the 2025 target of biofuel production, which is about 220 times the amount of rice that the Food Corporation of India allocated to biofuel production in 2020–2021. Similarly, the large-scale land-use changes associated with maize cultivation for bioethanol production may be prohibitive, especially given India’s low maize yields.

Overall, the costs associated with storage, transportation, labour, subsidies, tax, and other expenses make the use of 1G biofuels economically unviable and environmentally unsustainable in the long run.

Mookherjee sums up the challenges faced by India’s biofuel sector in five points: low yields of feedstocks for 1G biofuels will require huge land-use changes which will negate any emissions reductions achieved by biofuel usage; unsustainable economic subsidies and use of water and fertilisers in feedstock production for 1G biofuels; land revival programmes inhibited by poor classification of wastelands and complex land ownership issues; conflicts between different agricultural lobbies due to use of competing feedstocks; and promoting 1G biofuels could cause technology lock-ins which will make a shift to 2G biofuels difficult.https://html5-player.libsyn.com/embed/episode/id/22414865/height/90/theme/custom/thumbnail/yes/direction/backward/render-playlist/no/custom-color/87A93A/

What is the Way Forward?

Mookherjee explains that the expansion of the biofuel sector needs to be multipronged and rooted in sustainability.

The proposed expansions in 1G biofuel production need to think about broader land-use strategies by developing clear and detailed criteria for identifying land suitable for energy crops. For sustaining these crops, crucial factors such as net GHG emissions, local pollution, food security, land laws, and resource availability must be also be considered.

Mookherjee also points out that the state of research in developing 2G biofuels in India is still at a nascent stage of commercialisation. “Since the private sector does not have enough incentive to fund such developments, the public sector needs to take the initiative to scale up investment in pilot projects for 2G biofuels.” He further says out that Rs 1,969 crores have already been earmarked in the Pradhan Mantri JI-VAN Yojana for developing 2G-focused technologies. “If the scope and budget for such schemes can be expanded, and international grants and loans redirected towards 2G fuels, then existing frameworks like the Clean Development Mechanism could be leveraged to directly fund this sector,” he adds.

Rainforest Trees May have Been Dying ...

What Is Fast Fashion?