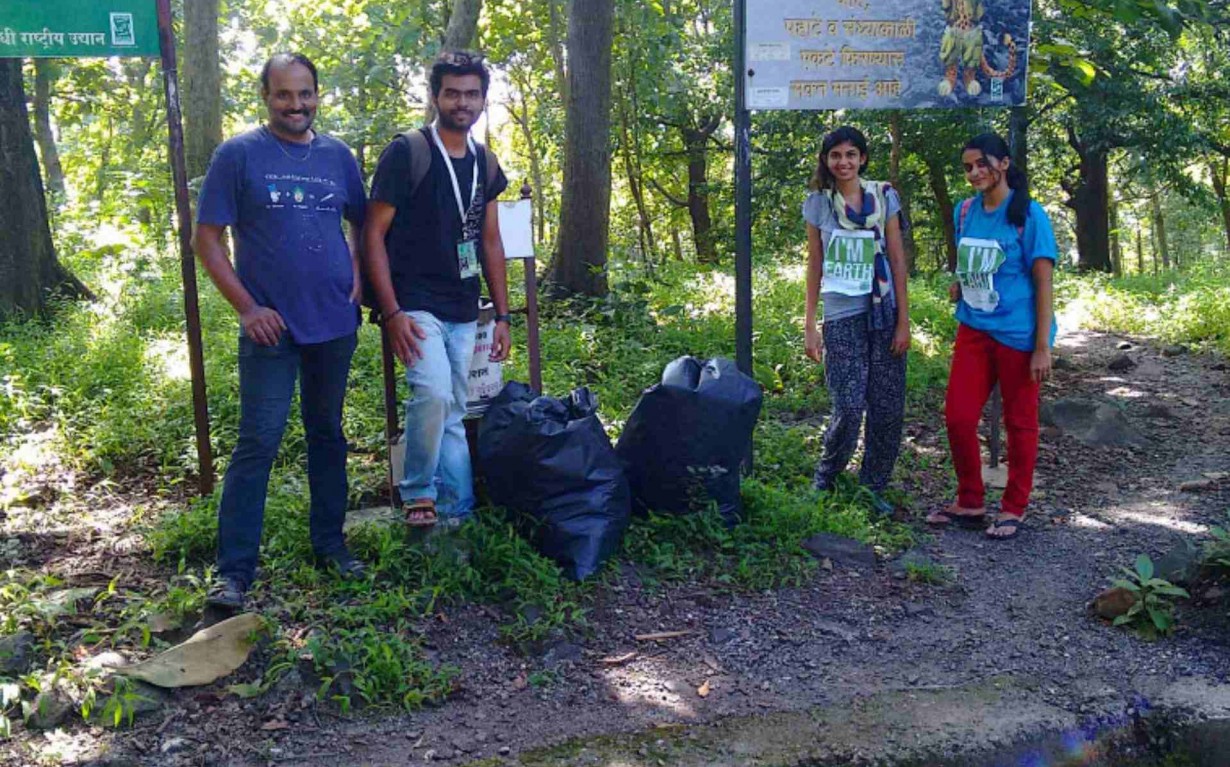 Failure to collect garbage has contributed to the growth of a huge population of stray dogs, drawing leopards from Sanjay Gandhi National Park into urban areas where they maul and end up killing poor slum dwellers.

It is the eastern side of the same park, Yeoor Forests, that Team Earth5R in Mumbai targeted again. Sagar Kulkarni, Akshita Shah, Khushbu Chotalia, Rohith Prakash and Ashok Kumar were the drivers of this change. They started a cleanup drive and collected about 5-7 kgs of waste, beginning from the gate and continuing along the walk. The garbage consisted of plastic snack wrappers, liquor bottles, mineral water bottles and plastic bags.

They were motivated on this cleanup drive by many enthusiasts who were inspired and showed positive interest to participate in the next cleanup. Opportunity and participation, this is a continuous cycle at Earth5r.

The team came across a like-minded individual, someone who had been doing the same job and from much longer than them. A middle-aged man nearing 50, he had carried out a revolutionary act of inspiring over 60 people to clean up the same area, all by himself, without any backing.

This was a year back. From then on the numbers kept dwindling, though he continued to clean regularly. On the very mention of cleaning up, he whipped out his plastic gloves and an apron bearing Gandhiji’s picture and quote. These acts were reassuring, and Team Earth5R acknowledges his spirit and work.

As they say, two heads are better than one. Team Earth5R took this opportunity to learn from their experience. The parties discussed what actually drives public action, and what hinders this change from happening. Ideally, it has to be a responsibility towards the environment.

Since it is hard to initiate the change, it is better to start off with an action – reward system. Repeating the action over and over, citizen’s ‘self- actualisation’ needs can begin to be fulfilled. They were enlightened in many spheres, as they spoke with him about good and bad practices, spanning public welfare and the government.

The day’s achievement was a nearly clean 2km stretch of walk, along with immeasurable learning.

Pollution in the Sacramento River and ...

COVID-19 and Beyond: Solid Waste Management, Sustainability and Circular Economy

The global spread of COVID-19 pandemic and limitations on commercial activities, mobility and manufacturing sectors have significantly affected the waste management sector. Waste management is…