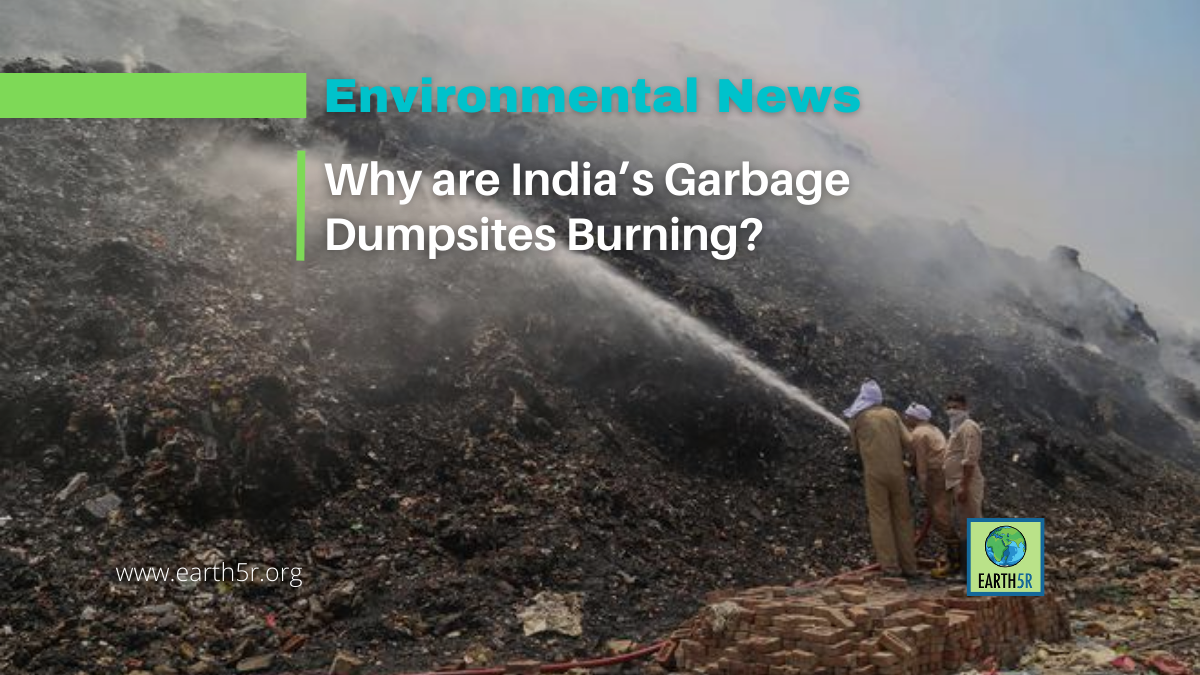 Why are India’s Garbage Dumpsites Burning?

Indian cities have a new pollution problem this extremely hot summer. The giant garbage dumps the size of multiple football fields from Delhi to Chennai are beginning to burn.

The massive fire at New Delhi’s Bhalswa garbage dumpsite site has grabbed national and international headlines. Fires are raging for the third straight day on Thursday, and officials said that it would take at least another day to put them out. The Delhi government even imposed a paltry fine of ₹50 lakh on the North Municipal Corporation of Delhi for its negligence.

The fire broke out on Tuesday and several reports detailed the smoke from the fire turning the sky hazy grey. The cause of the fire is yet to be ascertained.

This is the fourth major garbage dumpsite fire in Delhi in the last month, with the Ghazipur landfill alone reporting three. Not just in Delhi, such incidents are being reported from several parts of India, including in the Chennai Perungudi dumpsite, not far from the city’s IT corridor.

About 70-75 percent of all waste is organic and can be converted to manure or biogas. “Unfortunately, we have a weak management mechanism. That is where the problem is,” said TV Ramachandra, Professor at the Centre for Ecological Sciences, Indian Institute of Science (IISc), Bangalore, adding, “When we dump too much organic material in the landfills, methane will get generated.”

“Methene is produced due to high temperature and pressure. It is inflammable. This along with combustible material such as plastic, can lead to fires,” he said.

A 2021 report by the United Nations Environment Programme shows that most human-caused methane emissions come from just three sectors — fossil fuels, waste, and agriculture. It goes on to say that landfills and wastewater make up about 20 percent of emissions. “If you take out the organic waste, you will be solving the problem,” Ramachandra said.

When waste burns, harmful gases are emitted. “If you burn plastics, paper, and wood, there will be many dioxins, which can be highly toxic and can cause several serious health issues, including cancer. Heavy metals and nitrates can seep into the water and cause kidney failures,” Ramachandra explained.