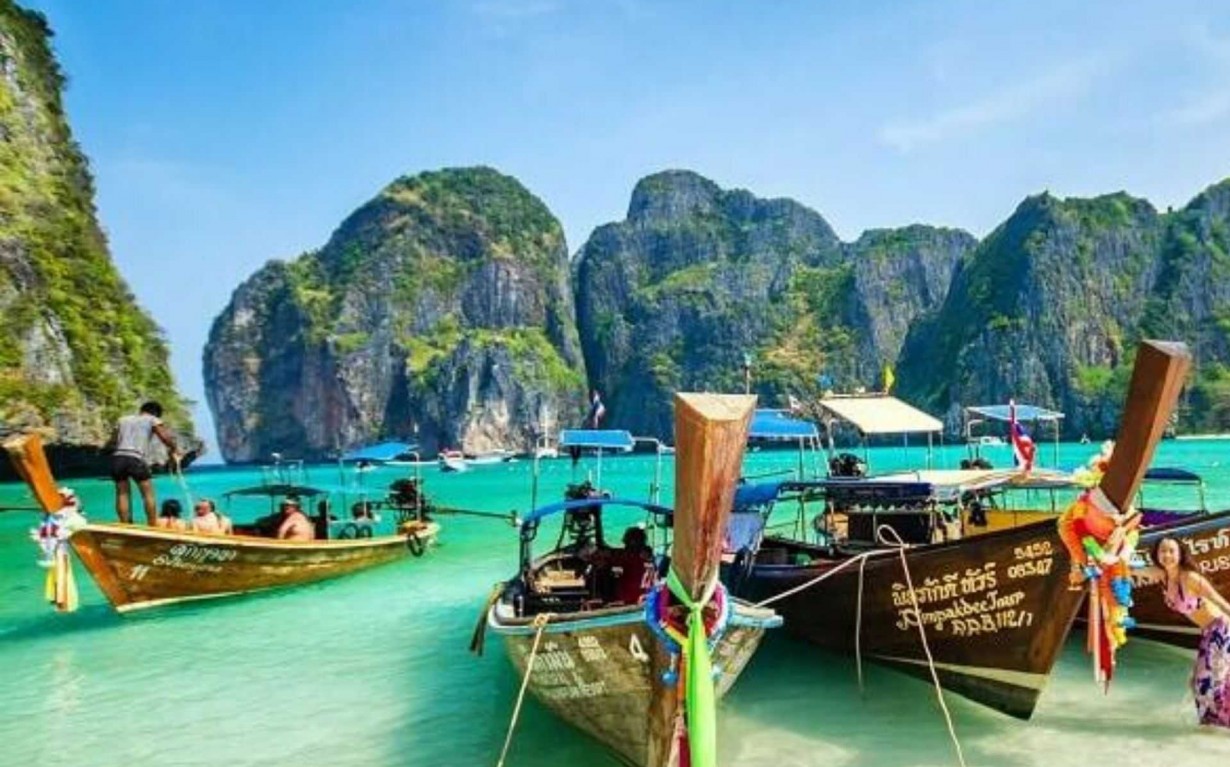 Phuket, the most beloved tourist destination is recognized as one of the World’s Top 5 retirement destinations by Fortune Magazine. It offers unique experiences from beautiful white sand beaches and enticingly blue water to mouth-watering local cuisine and world-class diving opportunities. However, the exponential increase in the rate of incoming tourists that the island witnessed from 3 million visitors in 2003 to a whopping 13 million in 2013 has taken a toll on the island’s local ecosystem especially in the last 7 years according to reports.

In February 2019, water rations were provided across major residential and business areas as the government struggled to conserve a plummeting water supply in the island’s main reservoirs before the annual rainfall returned. The interruptions in a regular water supply are worsened by the depleting quality of oceans and its marine life as it gets infested by plastics, bacteria and other waste.

An important joint effort by the community and various organizations working to restore the island’s health involved regular beach clean-ups. On 24th August 2019, Soi Dog Foundation collaborated with the members of the Mao Khao community to clean up 35 large bags of trash from the Mao Khao Beach. Most of the items collected involved plastic water bottles, cigarette lighters, single flip-flops, food wrappers, fishing nets and various other synthetic items. The interesting yet saddening part of this clean-up was that the majority of the trash collected was in the formation of a tide line, indicative of the sad fact that it had already been in the water causing probable damage to the marine life before it was washed ashore.

Here, the necessary clarification comes from the understanding that most of the plastic that is found on the beaches is not a result of careless beachgoers. Instead, a part of it comes from Indonesia while the majority of it is a result of littering even far away from the beaches or the wind blowing trash out of garbage cans. The plastic journeys from storm drain to klongs and thus ending up in the ocean. So while beach clean-ups are an irreplaceable form of damage control, the issue needs to be tackled at a preventive level.

According to an article published on 28thJuly, 2019 online on The Phuket News, Kamala Green Club and Oceans For All are collaborating on an effort to use mushrooms (micro meditation) and plants (phytoremediation) to repair the damage caused to the ecosystem. The major five steps in the solution-focused approach include cleaning the klongs using mushrooms that are efficient in removing oil, heavy metals, bacteria, nitrates and sulfates as well as faecal matter from the klong water.

Waste is one of Phuket’s greatest challenges. Each person on the island generates 1.13 kilograms of waste per day (50% of which is biodegradable). That’s over 1,000 tonnes of waste sent to the Saphan Hin incinerator every day. The island’s high level of waste and profligate use of one single-use plastics – plastic bags 15%, straws 5%, cigarette butts 5% – impacts marine life, killing sea turtles, dolphins and dugongs. Four of the five landfill sites at the incinerator complex at Saphan Hin are already full. On average, from October 2017 through September 2018, about 925 tons of waste was delivered every day. 7.18 million tons of waste was improperly disposed of.

The sea turtle hospital at Sattahip naval base in Chon Buri, south of Pattaya on the Gulf of Thailand, is doing an autopsy on a dead endangered Hawksbill sea turtle. The one metre long and 40-kilogram dead sea turtle, believed to be about 15 years old, was found floating near Koh Juang in Sattahip Bay in Chon Buri by a fisherman, Surasak Hongthong. The Hawksbill sea turtle is listed as a critically endangered species in Thailand. He pulled the sea turtle aboard his boat and brought to the naval base.

A team of naval officers and a veterinarian from the sea turtle hospital examined the animal, which showed no signs of being wounded. Four sea turtles have been found dead in Thai seas in the past week and most of them were found to have plastic bags or pieces in their stomachs. The sea off the Sattahip area is polluted with trash, including plastic waste, and is increasingly obvious when it washes ashore in rough weather. Hence the emphasis on equipping the community with efficient compost systems is an important factor in facilitating change and pushing Phuket towards becoming a Zero Waste Island.

Seaweed and shellfish farming also pose as a great solution to serve the double purpose of providing habitat for fish and sequestering CO2 and other contaminants. An effort to restore coral life and health is also underway to revive ocean life and maintain a healthy marine life network.

Koh Siray is a small quaint island on the east coast located next to Phuket Town and is home to one of the major fishing sites in the land. Unfortunately, the klongs are clogged with plastic and filled with disease-causing bacteria and fecal matter. Many of the children living in the village are developing skin rashes and illnesses because the water in the rivers is also contaminated due to the drainage leading into the water bodies. The pollution is flow­ing into the waters that surround the island, which is then ingested by the same fish that are likely to end up on our dinner plates. The above mentioned five steps can make for a great approach to help restore the local community and ecosystem health in Koh Siray and put it on the map as an example of the success of effort backed by science-driven solutions.

The Phuket Sustainability Indicator Report 2013 is a joint effort that enlists the vision for Phuket as a sustainable island that achieves a self-sustained economy that is accompanied by overall success in the community’s socio-economic well-being. The report was a result of various volunteers and organizations coming together led by Nick Anthony and Sean Panton from SEEK (Society Environment Economy Knowledge) inspired by The AtKisson Group system of developing sustainable cities. The indicators are beautifully conceptualized on a compass that involves the four directions of growth-

The Nature Compass Point includes goals such as helping the Phuket’s coastal environment achieve a continuous excellent water quality with clean beaches and are restored to their natural condition; and that Phuket becomes a clean Zero Waste Island by 2025. To tackle the issue of Phuket’s under capacity to properly dispose of excess waste, the strategies enlisted in the report include establishing community beach groups under The Green Initiative, establishing a reward-based recognition system to encourage businesses and organizations to be mindful of their impact on the environment, efficient compost systems etc.

Similarly, the Economy Compass Point lists goals for creating a sustainable economy that encourages and empowers local businesses and communities. One of the important goals mentioned is to develop and implement a Sustainable Tourism that protects the island’s natural integrity and promotes a culture of harmony. This can be achieved through a collaboration between residents, the local government, education systems as well as independent businesses that come together to identify issues and problem-solve while upholding the value of achieving overall sustainability.

An important part of this project is also the Society Compass Point which acknowledges that the monumental task of marrying sustainability efforts with facilitating the society’s upliftment and well-being. The citizens should feel connected, engaged and liable and hence actively participate in community activities. Educational systems must target not only the curriculum but also application-based programs that motivate the understanding and adopting of sustainable living practices in each household. Tapping into symbols popular in the culture, initiating healthy dialogue, building networks and support systems are some of the most efficient ways of achieving this development indicator.

To make this effort as wholesome and sustainable as possible, the Well-Being Compass Point enables the stakeholders to promote individual and community well-being by making the people feel safe by preventing drownings, promoting a healthy individual and group identity and equitably dividing resources between tourists and locals.

There are other innovative ways to contribute to change that may have a more profound and lasting effect. Environmental degradation is a systemic problem and a systemic approach is crucial for solving this crisis. No matter how resilient and generous, Planet Earth is, it has limits. It’s a great challenge, an enormous task, and a collaborative approach is needed to build a change that is sustainable and scalable.

The Australian Government through the Department of Foreign Affairs and Trade has supported the Ratsada District in improving waste reduction, water supply, and sanitation and on April 28th over 400 community members including the local council and 70 personnel from the RAN Ship HMAS Canberra engaged in a massive clean-up in the Moken Village,

The aim is to improve health, sustainability and economic opportunities for local people and improve Koh Sirae as a tourist destination through the collaboration of all interested parties.

Earth5R, a global environmental organization has been launching such a collaborative project across the globe and now the team has started it’s work at Phuket – The ACT project of Earth5R brings communities together and develops an ecosystem that coexists by playing symbiotic roles between different stakeholders. With the help of citizens, the team runs local projects that make the entire neighborhood sustainable.

Earth5R provided sustainability advisory and consulting to global governments, organizations, and corporates and helps them design and manage sustainability projects that meet the triple bottom line- People, Planet and Profit.

Earth5R has launched ACT Phuket and in partnership with SEEK Phuket, Australian Government – Department of Foreign Affairs and Trade, Government of Thailand, Phuket Hotels Association and Prince of the Songkla University of Phuket.

As a part of the Phuket Sustainability Initiative a community collaboration workshop to reduce waste in Koh Sirae has been organized by local citizens and the Phuket Hotel Association where Saurabh Gupta, founder of Earth5R, is presenting the citizen-driven sustainability development model.

The workshop also includes an engineering and finance proposal for a Moken Village Waste and Water System by Mr Atdhaya/ Khun Sampan aiming to reduce waste through improved water and sanitation with the contribution of the local community.

A project led by Khun Thithi, has undertaken training in local schools, construction of compost bins and is pioneering an organic garden at the Kindergarten.

With a track record of benefitting around 1.2 million people at the bottom of the pyramid, Earth5R, driven by the global community of over 35,000 citizens and local partners at Phuket namely SEEK, Govt. of Thailand, Phuket Hotels Associations, Prince of Songkla University and Govt. of Australia is eagerly looking forward to take Phuket one step closer to sustainable and greener future!

Here is TEDx Talk by Earth5R Founder Saurabh Gupta where he presented the working model of the ACT Project.

India Says No Plans for Now ...