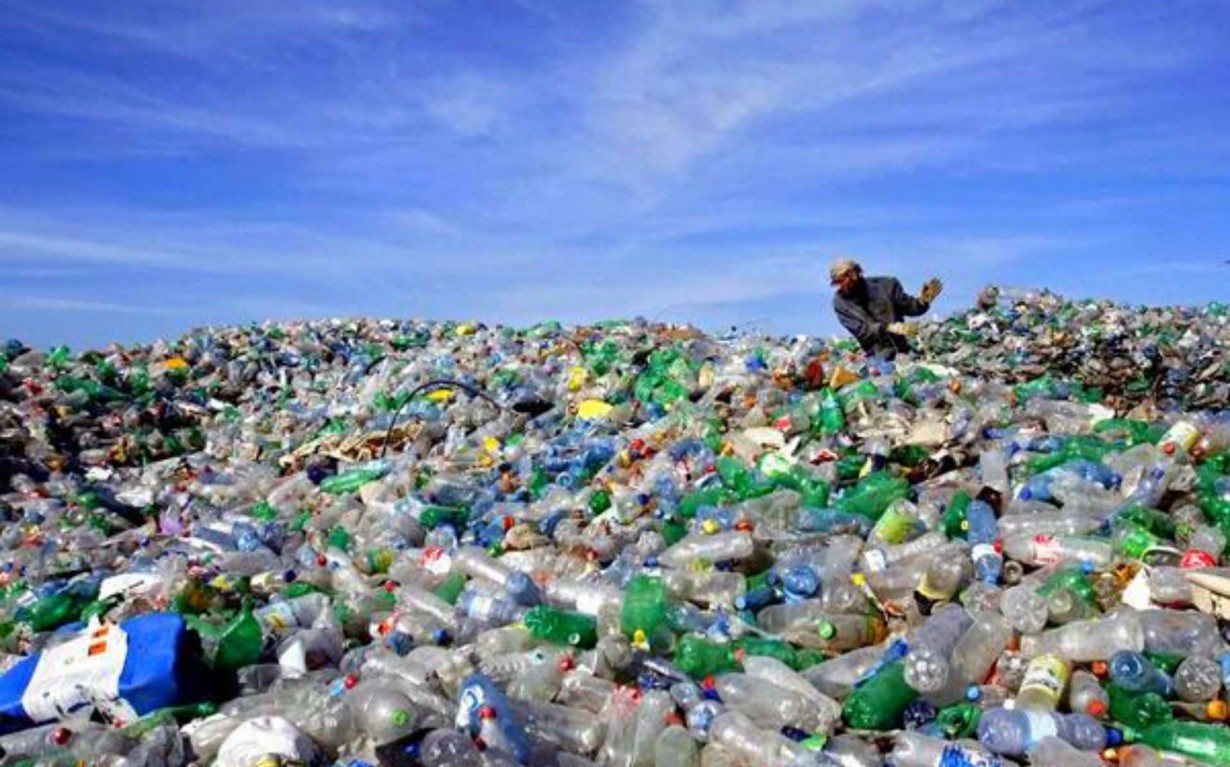 The popularity of the plastics boomed in the 1950s and has been growing ever since. In 2018, 359 million tonnes of plastic were produced, one-third of which was single-use packaging plastic, and only 10% of the total production was recycled.

Moreover, the demand for plastic increased in 2019 by up to 3.5% and it does not seem to stop.

For years now plastics have been seen as an antagonist working against our environment. It is everywhere. On our lands, in water, in air, and even in our food. But before we start pointing fingers at plastics, we must realize this trouble with plastic started with us.

The plastic production has increased from 15 million tonnes in 1964 to 311 million tonnes in 2014. The consumerist behaviour of our society increases the demand for various plastic commodities, 50% of which are single-use items.

This is because the plastics are cheap, lightweight and durable. Hence, the demand for plastic is insatiable and the production is expected to double in mere 20 years.

PLASTIC AND ITS DISPOSAL

From over 300 million tonnes of plastic produced annually, around 50% of it is single-use plastic. As most of the plastic is non-degradable, proper management and disposal of plastic is a global problem.

The sudden boom in plastic consumption was not teamed with proper waste management which has led to the accumulation of plastics in landfills and oceans.

More than 8 million tonnes of plastic end up into the oceans which have a horrendous impact on life in water and around it.

Representation of disposal of plastic waste over the years (ourworldindata.org)

The best way to curb this plastic mania is by Refusing and Reducing the use of plastics.

One of the Sustainable Development Goals (SDGs) set by the United Nations is Responsible Consumption and Production. This goal refers to all the natural resources being exploited by humans by uncontrolled production and consumption of goods, including petroleum.

Most of the plastic is made from petrochemicals and the rise in demand for petrochemical for plastic manufacturing is estimated to account for 20%  of the total oil consumption by 2050.

Completely avoiding plastics may not be a viable plan as plastic is present everywhere around us, from fibres in carpet and fleece to the device you are using right now to read this.

It is hence crucial to educate oneself and others on ways to reduce consumption and ways to dispose of the plastic. Here are a few things which could be done to overcome the Plastic Problem besides Refusing and Reducing.

Upcycling is when used, waste materials are transformed into products which are better in quality or function. The composition of the material is not changed and minimal physical changes are applied which makes it cost-efficient and does not require any technical training either.

Upcycling of plastic and engaging in a circular economy (reformafrica.org)

Such initiatives are important as they play a huge part in reusing and reducing trash, as well as putting this ‘trash’ back into the cycle by being a part of the circular economy.

Because of the variety and abundance of plastic, upcycling is a good way of reusing the plastic, often multiple times, before recycling it.

Upcycling is also a preferred alternative of dealing with plastic waste because a lot of energy and resources are saved as no processing of the plastic is required as it is with recycling or downcycling.

When we think about a solution to plastic pollution, the first thing we think about is recycling. Recycling is processing the plastic wastes to produce plastic of the same value and quality as the original plastic.

In a true recycling process, recycled plastic could be used for producing the same product.

The process of recycling (sketchbubble.com)

Even though recycling is painted as the ultimate solution for all our plastic problems, recycling actually isn’t enough.

Over 8.3 billion tonnes of plastics have been produced since the early 1950s. Out of this only 9% has been recycled and a staggering 79% ended up in landfills and dumps or our environment.

This is not only because of the irresponsible use and dumping but also because the consumer often fails to realize that many plastics could not be recycled.

Most plastics are not or cannot be recycled.

We created the notion that this stuff was being recycled, so the public kept buying it, but most mixed plastics are simply not being recycled.

On average, it costs $4,000 to recycle one ton of plastic. A large portion of the plastic that is being good-naturedly thrown in the recycling bin might still end up in a landfill because processing certain types and a certain quality of plastics is more expensive than throwing it in the landfill or by incineration.

In the U.S.A alone, 93% of the plastic put in the ‘recycling bins’ are not recovered but dumped in landfills.

The idea of downcycling is often confused with Recycling. While the plastic is processed in both these methods, during recycling the quality and hence the value of the product is reserved, while in downcycling the product formed after the processing is of lesser quality.

Plastic is one of those materials which do not recycle well.

Generally, plastic can be recycled once or maybe twice before it starts losing its structural integrity. With every recycling process, the length of the polymer decreases which makes it structurally weak. Even though the quality is not preserved, downcycling prolongs the life of the plastic by putting it back into the system instead of landfills.

A common use of downcycled plastic is to convert it into fleece or carpeting products (fibre), Plastic lumbers, car parts, or even textiles. Many of these products could not be recycled/ downcycled again but few could be processed further into other downcycled products.

One of the promotional brochure from Levi’s Waste<Less line of jeans (behance.net)

Levi’s, the popular fashion company known for its denim, caught the attention by “Making jeans out of Garbage”. They made a fashion statement by launching a line of jeans made out of plastic waste by using 8 plastic bottles per pair of jeans.

This not only reduces the amount of energy and water used while manufacturing the denim but also reduces plastic waste by downcycling.

Taking an environment-focused step like this is important as the textile and fashion industry is one of the most polluting industries.

Earth5R has led numerous clean-up drives and one problem that has always been evident is the astounding amount of plastic waste. We have cleaned and put tonnes of waste plastic into a circular economy by recycling and downcycling.

The plastic waste collected from the Powai Lake in Mumbai, India was downcycled into plastic lumber for making plastic benches.

Another popular method of disposal of plastic is incineration. Though this method keeps the plastic out of the landfills and oceans, it adds another level of problems by causing air pollution, dioxin emission, and toxin waste residues in air and as ash.

Yet, the energy generated from incineration is being used by some to generate electricity.

Safer and more efficient alternatives for turning trash into energy are being developed and employed.

The idea of turning plastic waste into fuel is gaining traction as the problem does not seem to end anytime soon. The principle is to break down the plastic polymer into components that could be used as fuel.

This idea is especially useful as non-recyclable, non-biodegradable plastics could also be used for this conversion.

There are many fuels which could be achieved by using multiple techniques such as:

Besides oils, plastic can also be broken down into hydrogen and sulfur fuels. Though the use of  Gasification and Pyrolysis has already begun, other ideas will take a few years before they can be implemented into public and industrial sectors.

Our current linear economy is based on the Manufacture-Use-Dispose principle. This is an unsustainable practice and we are already staring in the face of a major global tragedy.

In a circular economy, the goal is to keep the material in circulation within the society for as long as possible. This not only generates revenue for the people involved but also helps keep the consumption of virgin plastic to a minimum.

Earth5R has been actively engaged in practising and promoting a circular economy. We have trained and engaged citizens of all age groups and socio-economic backgrounds to encourage them to take steps towards creating a sustainable society.

As plastic is so versatile and abundant, it plays an important role in the circular economy.

The struggle to save our planet and our lives from the plastic has been long and will continue into the unforeseeable future but this goal is not unattainable. A conscious effort is required on our part to steer the fate of the earth and its inhabitants.

Over the years, the Mithi river has been used as a large sewer in Mumbai, India. This “highly polluted” river is actually a saving grace for low-lying coastal cities like Mumbai. Mithi works as a natural storm drainage system which, if functional, would prevent flooding in the city.

Around 80 to 110 metric tonnes of plastic waste, much of it is single-use plastic, is being dumped into Mumbai’s drains and water channels everyday.

The deluge city experienced in 2005 that killed around a 1,000 citizens was because of the inefficient drainage caused as the river choked up on plastic.

The 2005 floods in Mumbai, India (newsnation.in)

Earth5R in partnership with United Nations Technology Innovation Labs (UNTIL), VTT Technical Research Centre (Finland), RiverRecycle (Finland), and Huhtamäki (Finland) is working for the restoration of the Mithi River.

The restoration is by ‘Value Creation’ based on the idea of Citizen Awareness and engagement of Circular Ecology in accordance with technological advancement.

The Value is Created by using a fully automated floating unit that runs 24 x 7. This is an environmental-friendly unit working on solar energy without any emissions. The system includes:

The unit uses Zero Emission Pyrolysis Technology that makes oil with 70% conversion rate and it also runs on its own fuel.

Awareness Program to Create a Sustainable ...