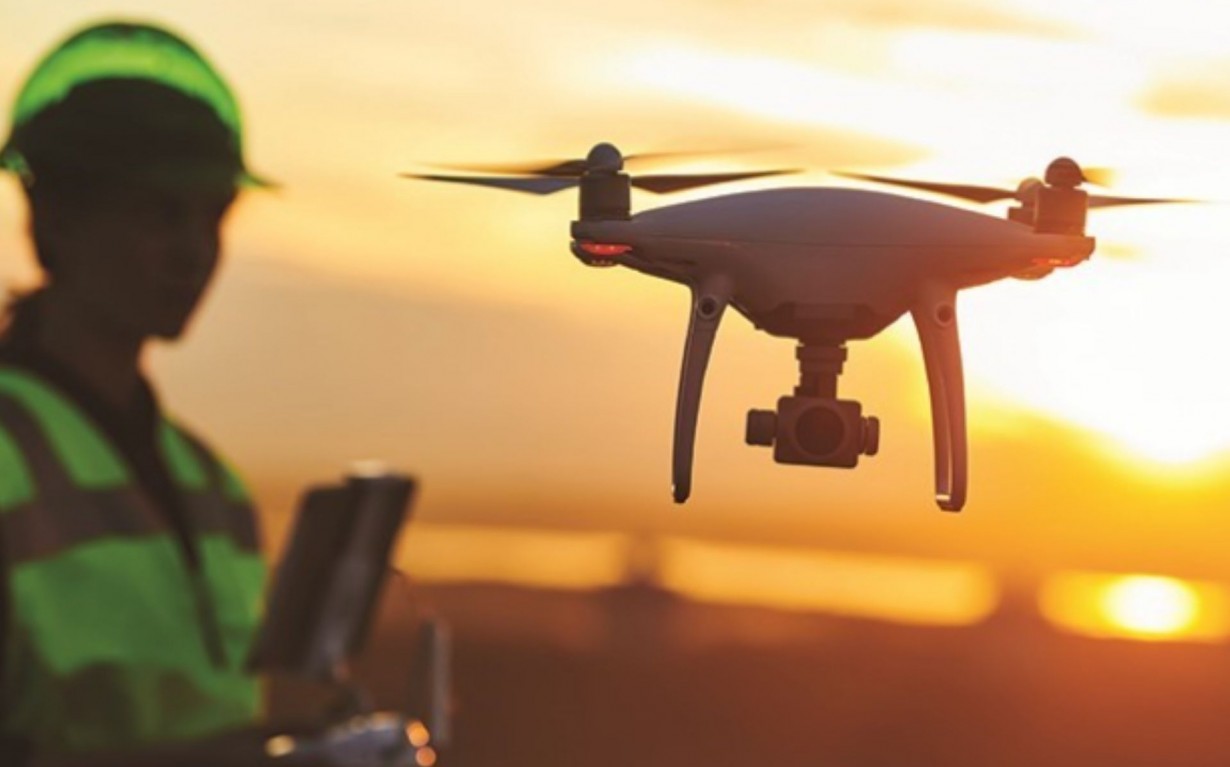 The aviation industry is being transformed by the use of Unmanned Aerial Vehicles, (UAV) or drones. The term drone was used for the first time in a 1936 report by lieutenant commander Delmer Fahrney of the US navy who was in charge of a radio-controlled unmanned aircraft.

Drones have been associated with the military in the popular imagination. However these associations are slowly changing as drones are increasingly used in civilian use as well.

Drones are now used in every field such as by police for forensic examination of crime scenes, filming sporting events and making documentaries etc. They are being used for border patrol, traffic surveillance, pipeline control, port security, atmospheric monitoring, soil moisture imaging, waste management, crop monitoring and much more.

There are basically two models of drones available:

How does a drone work?

The UAVs are equipped with radiation detectors, cameras and GPS devices. After the UAV takes off from the ground, radiation readings and other relevant information are synchronized with the exact GPS position and sent in real time to the pilot at the ground station and stored onboard.

An illustration showing different components of a drone

After landing, all the detailed data is recovered, which means that the photographic/geographic information is reconstructed together with the corrected data of the radiation measurements. The satellite-like photographs and the analysed radiation data measurements are then made available to decision-makers for further action.

Every year the world generates around 2.01 billion tons of municipal solid waste; this is projected to increase by 70% to reach 3.4 billion tons by 2050.

A landfill is an engineered pit, in which solid waste is filled, compacted and covered for final disposal which are specially designed to encourage anaerobic biodegradation of the organic fraction of the waste for biogas production by monitoring the oxygen condition and moisture content.

Mismanaged waste is causing hundreds of thousands of people to die each year. People working at land-fills are more exposed to toxic substances. According to a survey by Solid Waste Association of North America (SWANA), at least 53 workers died on the job in 2019 in the United States and Canada. Numbers are more severe in developing countries where workers are working without proper equipment.

Some of the major issues faced by the workers at the sites are:

b) Industries and household chemicals which includes motor oil, mercury, solvents, and batteries.

a) The workers are at risk of being struck or run over by material weight in ton.

b)Heavy material bales are capable of causing severe injury to the workers.

Workers are exposed to dust and fumes that can cause long-term health problems such as asthma and Chronic Obstructive Pulmonary Disease (COPD).

“Drones have provided a reliable solution to the problem faced by the workers at land-fills.

Drones are used to produce high resolution 3D Models of landfills, which helps to monitor how a landfill is changing over time, thereby saving the management team to avoid potentially hazardous and costly issues.

Drones have unlocked potential in the waste management industry and have proved to be the most economical, practical, efficient, and accurate equipment. They make it possible for the workers to survey structures from the ground and at a safe distance.

They provide point-in-snap of an entire area which help in calculating the landfill capacity, landfill owners can conclude the cell to be filled with waste without prompting contamination to their surroundings, with comprehensive real time-data from landfills help in to create accurate 3D models which helps to create more realistic visualization.

Check out the video link below to understand the role of drones in mapping methane gas in landfills:

2. Use of Drones to Collect Garbage

In an advanced technological world, drones are being used to collect garbage instead of deploying human beings in toxic garbage landfills which create harmful impact to their health. A drone suspends over the area of the garbage landfill and scans its ground mapping, in doing so, the drones scour the ground.

There are currently five patches of floating plastic and rubbish in the world ‘s ocean today, the largest being the Great Pacific Garbage patch at 1.6 million sq. kms., made up of a trillion pieces of plastic.

The Great Pacific Garbage located between Hawaii and California measures 1.6 million sq. km.which is equivalent to 3 times the size of France.

Check out the below video to know how a military aircraft was turned in a high-tech research platform to track the Great Pacific Garbage:

With 8 million tonnes of plastics entering our ocean each year, researchers can only account for where 1% of that ends up; our ocean surface. That begs the question where is the missing 99%?

The answer can be found on the seafloor, in marine life and on our coastlines.

The Plastic Tide Project was an innovative initiative dedicated to mapping of plastic waste in oceans. By using a drone to fly over known garbage hot-spots and popular beaches, individuals can target their clean-up processes with an exact pinpoint of the damage, combined with an artificial intelligence algorithm. In nutshell:

In the drone images, by tagging plastics and litter, the computer program directly gets to autodetect, measure and monitor plastics to help researchers answer how much of the missing 99% ends up on our beaches

Check out this video for more information about the Project:

However in 2019, this project was shut down due to a  major lack of financing hindering the progress of its mission and impact.

3. Use of Drones for Trash Clean Up in Waterways

Around 8 million tons of plastic waste enters the ocean annually, on top of the 150 million ton already resting plastic.

Check out the video link below to understand the implications of plastic pollution for the oceans and environment:

Plastic gets consumed by wildlife throughout the ocean. It degrades over time into microplastic which are consumed by plankton, ultimately killing them in the process, ones that are not killed are consumed by larger organisms moving their way up the food chain to human beings.

Drone Technology and Mithi River Clean up in Mumbai by Earth5R

The Mithi River is a river on Salsette Island, the island of the city of Mumbai, India. It is a confluence of tail-water discharges of the Powai and Vihar lakes.

Drone assessment of the floating trash in the Mithi River

Mumbai’s coastline is now considered among the most polluted in the world. (Source: ToI)

In line with technology applications, Earth5R in partnership with United Nations Technology Innovation Labs (UNTIL), Huhtamäki Oyj, VTT Technical Research Centre of Finland, and RiverRecycle Oy is currently involved in cleaning up the Mithi River.

A fully automated, floating, environment-friendly unit working on solar energy helps to intercept and collect floating plastic waste before it drifts into the Arabian Sea after which, the plastic waste will be recycled or processed into oil using pyrolysis technology.

Following are the two stages for the implementation of this project:

Check out the waste and plastic pollution near the slum areas of Mumbai:

This project which includes drone mapping will help Mumbai manage its waste in the following ways:

Mapping the course of the plastic waste in a river section by means of drones can help to optimize solutions. If the spots where the plastic enters the river can be pin-pointed, then preventive measures can be put in place.

The waste monitoring system hence developed and the data which is collected would help develop similar projects for other cities and many other rivers.

The use of drones in managing waste has increased over the past years and drones will have a significant impact on the management of waste.

Drones have redefined traditional surveying and inspection methods to manage the activities at garbage land-fills.

While we’re still in the early stages of using drones for this type of effort, studies like the Remote Sensing of Marine Litter and the one under Plastic Tide Project prove that remote sensing of marine plastic is possible. At a lower cost than airplane imagery and higher quality than satellites, we expect to see more and more drones used in this field of work.

Plastic monitoring drones look as if they can be a useful tool, but there’s a long way to go before the software can be made available on a wide scale. To automate the process of marking plastics on drone images by hand, a type of image recognition technology will have to be developed.

Operating drones do not require high-tech training, a simple drone training course could help the waste management organization to manage it. Also it is cost-effective in comparison with the labor-intensive technique, which also impacts the health of the workers working in landfills.

The single biggest problem in the drone industry is that they are not well regulated, also the world is still at the early days of drone development.

Earth5R is an environmental organization from India with its head office at Mumbai. It works with the NGO sector, Companies and helps them conduct environmental Corporate Social Responsibility (CSR) programs across India.

Nature Trail and Clean-up at Bannerghatta ...

Waste Segregation at Jammu by Earth5R

Social Entrepreneurship and Environmental Awareness in ...

Cleanup Drive at Yeoor in Thane ...