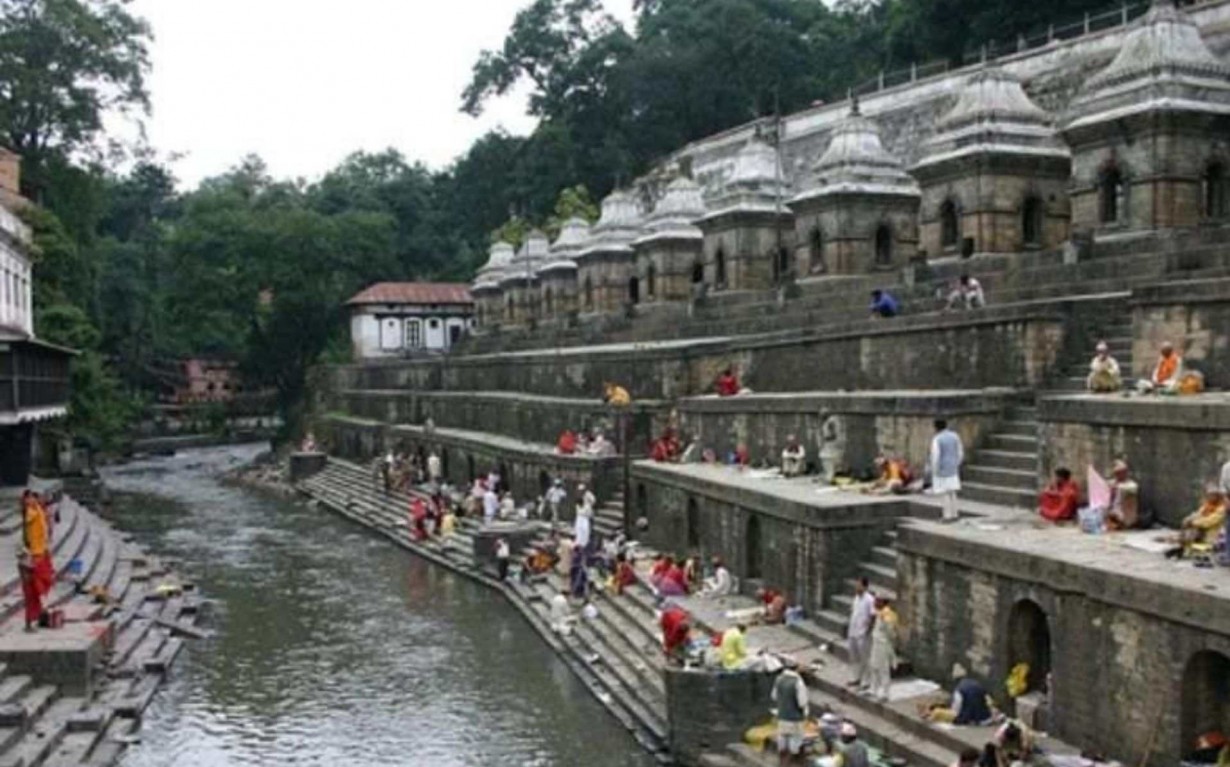 Kathmandu Valley used to be a big lake. Bagmati River formed the big lake over 1 million years ago. The Bagmati River is considered a source of Nepalese civilisation and urbanization.

It flows through the Kathmandu Valley of Nepal, the 2,000-to 3,000-metre range is the southern boundary of the “Middle Hills” across Nepal, an important cultural boundary between distinct Nepalese and more Indian cultures and languages, as well as a major geological feature.

The Bagmati River Delta, including the Kathmandu Valley, lies between the much wider Gandaki Delta to the west and the Kosi Basin to the east. Without glacial sources, the flow is more dependent on rainfall, becoming very low during the hot season, then peaking during the monsoon season.

A view of Bagmati River at Sundarijal (Wikipedia)

The river Bagmati flows 128.6 m/km into Shivapuri Area and 2.7 m/km into Kathmandu. The river runs at a gradient of 16.4 m/km in Mahabharat, the gradient is reduced to 3.4 m/km Siwaliks and further in the Terai to 1.1 m/km.

Water flowing in the river is deemed sacred and is used for spiritual and ceremonial rituals in the several significant temples on the banks of the river. The river flows through Kathmandu, the political and economic hub of the world, as well through the gateway to tourism in Nepal.

It supplies most of the city’s drinking water in its upper basin and generates hydropower in the Bagmati River basin by the Kulekhani, which is the only reservoir-type hydroelectric power station in Nepal with an installed capacity of 60 MW, with two units of 30 MW each.

The expected annual energy generation capacity of this plant is 165 GWH as primary energy and 46 GWH as secondary energy, contributing about 7% to the Integrated Nepal Power System (INPS)

POLLUTION SOURCES IN THE DYING BAGMATI

The waters are still crystal-clear on the hills of Shivapuri-Nagarjun, where they come from a lion-headed river. But as it passes through the forests and down into Sundarijal, the river becomes slow, and its direction becomes one of growing depletion.

Many people who live in Kathmandu dump personal waste into the river even though clean river water is a treasure for the residents of the Kathmandu valley.

Today it is only safe to assume that the rivers are clean at their source and water pollution is a big problem in the valley. The Hanumante khola, the Dhobi Khola, the Tukucha khola and the Bishnumati khola, have been the most polluted ones, amongst others.

The construction of concrete houses has begun because of the modernization. People take sand from the rivers and deepen them. The surface of the soil then descends, and waste flows into the rivers. It was the origin of river pollution.

People taking sand from the bagmati river (Oh My News)

Mismanagement of the housing and local industries drainage network at a time of increasing urbanization. Even the hospital outlets flow into the rivers directly. 600 tonnes daily — is dumped directly in the river. And thus, the valley’s major river bagmati is not the natural resource of importance anymore.

The cycles put in motion by polluting waste deplete the oxygen (oxygen concentration was assumed to be at 90 percent of the saturation level, or 7.53 mg/ml) in the water required for the survival of river plants and safe microorganisms.

There is virtually no water in the rivers during the dry season. The wastes in the river have killed a large number of living organisms as the nutrients they need to survive have been replaced by massive quantities of arsenic, chlorine, phosphorus , potassium, suspended solids and human excreta.

Experts point to environmental danger, widespread sand mining, growing solid pollution, public lack of understanding, severe government incompetence and bad policy for the degradation of the entire Valley flow, alongside heavy industrial operations. The river is biodead in Kathmandu Valley and consists of heavily contaminated sewage that puts the health of the population and users of the river below the river.

The main threat to infrastructure, agriculture, people’s lives, and their  livelihoods throughout the basin are frequent floods and river bank erosion.

Darkling Waters (Down To Earth)

INITIATIVES FOR RESCUING THE HOLY BAGMATI

EFFORTS OF THE GOVERNMENT TO REGAIN THE PRIDE OF NEPAL

Development efforts by government to improve basin water safety. The Government now understands the importance of resolving the problems by getting away from this approach to silo management and embracing IWRM members. A quantification of existing rights for use and distribution is pursued under the new Water Management Act (1993).

Towards IWRM and River Basin Planning in Nepal (Linkedin SlideShare)

Cleaning of bagmati River by the Nepal Army (Youtube)

NGO’S COLLABORATION FOR THE BAGMATI

Since local groups and NGOs – including the WaterAid charity – have decided to collaborate with Friends to try to save Nepal’s most holy river, the bagmati River Project has entered a further level.

It is the objective of the friends to restore the Bagmati and the other streams of the valley by bringing local consciousness to light in various ways by emphasizing the sacredness of the Bagmati. FOB has made a promise to protect the Bagmati River from pollution and other challenges, its rich economic , cultural and heritage value.

Friends of the bagmati (FOB)

HELP FROM THE WORLD ORGANISATIONS

Nepal also got support of some world organisations for Bagmati river which are:

Youth volunteers clean up Brahmana, a section of the Bagmati River (Global Peace)

There are many companies who give importance to their CSR project to ensure the development of the country with all the business.

As we get to know the importance of the Bagmati river in Nepal, and the problems it is facing to survive in the modern period of urbanization and development of the basins which covers the entire country.

Some important steps to improve the condition of the holy river in the womb of the Himalayas:

As for the countries like Nepal where they give priority to their beautiful culture, so securing their tradition they need to fulfill their social aspect.

Similarly for developing countries, the economy plays an important role in holding their position among the developed countries in the world. And as we all know that tourism plays a major role in the economy of Nepal projects should not affect the tourism sector of the country.

In the end, this article is all about sustaining Bagmati which contributes in the environment sector and all the projects should give major focus on the most important to protect our mother Earth.

E-Waste Awareness for Future Changemakers at ...

Sustainable School Project: In Partnership with ...

Single-Use Plastic Ban: What Changes From ...