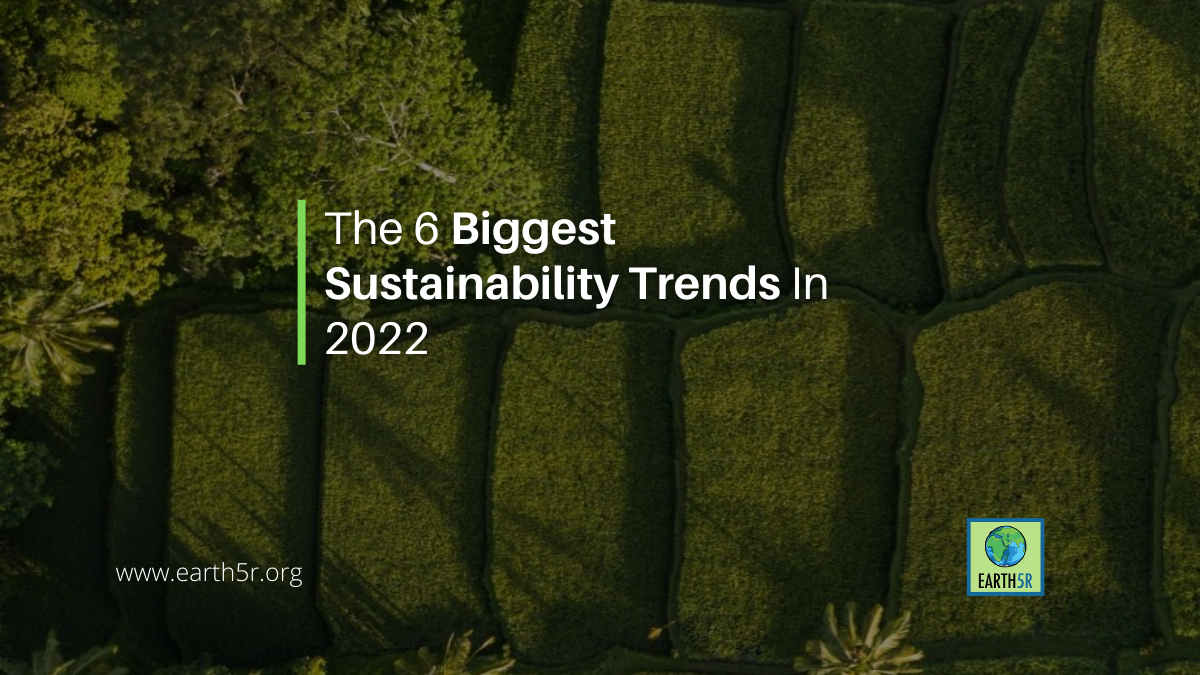 The 6 Biggest Sustainability Trends In 2022

Even though 2020 saw a drop of over 8% in global carbon emissions — the sharpest decline in recorded history — the year was full of setbacks for the world’s sustainability and climate goals.

On the plus side, several movements towards a cleaner, greener tomorrow are also accelerating rapidly.

Here are the top six trends shaping a more sustainable future for our Planet.

An infographic based on the latest Climate Watch data highlights that energy usage contributes to 73.2% of global greenhouse gas emissions. This is far and away the highest contributor, with the second-highest being agriculture, at 18.4%.

So, it is no surprise that energy generation has seen the highest levels of interest and progress.

In the past year, we have seen record growth in renewable energy sources such as solar and wind, which grew at 23% and 12%, respectively.

And at 1154 GW and 709 GW, wind and solar together account for two-thirds of current renewable output.

Moreover, renewable sources generated around 8,300 TWh of electricity in 2021, which translates to a growth of roughly 8% — the highest annual jump in nearly four decades.

Renewables also show no slowing, with output expected to double by 2030.

Another technology with rapidly mounting interest is “green hydrogen” — hydrogen fuel synthesized with energy from low-carbon sources such as wind and solar.

The cost of green hydrogen has been steadily decreasing in recent years. Because of this, the market is expected to be worth as much as $11 trillion by 2030.

Meanwhile, nuclear power is rising again after a decade-long plateau in growth.

China and Russia are driving the highest growth in nuclear energy generation, at 5% and 3%, respectively.

While nuclear sources currently generate only 10.3% of the world’s energy, these increases will boost nuclear’s output in developing economies to over 30%.

With nuclear and renewable sources combined, low-carbon energy generation exceeds the output from coal plants for the first time, saving more than 2,000 million tons of carbon emissions per year.

Before the pandemic, transportation accounted for 16.2% of greenhouse gas emissions, with road transport responsible for 73.4% of those emissions.

The electric vehicle (EV) is leading the charge in the quest to decarbonize transportation.

Even though global mobility was subjected to considerable shocks in 2020, EVs still registered a staggering 43% growth over the previous year.

This puts the number of electric vehicles roaming the world’s roads at over 10 million.

This puts into context why 18 out of the world’s 20 largest automotive manufacturers — that account for nearly 90% of global car sales — have switched or pledged to switch, either completely or significantly, to manufacturing EVs in the coming years.

Volvo has announced that it will sell only electric cars by 2030, while GM has pledged to switch to a zero-carbon portfolio by 2035.

Others with aggressive electrification plans include Ford, Volkswagen, and Stellantis – the giant joint-venture between Fiat Chrysler and Peugeot.

Mounting pressure from government policies to decrease carbon emissions is also an important contributor to the EV revolution.

But consumer concerns related to the limited range of EVs and the slow rate of charging (compared to filling up an internal combustion vehicle) are limiting adoption.

Manufacturers are trying to address these through innovations like the solid-state battery, which promises charging times of just 10 minutes to get up to a full battery, and a range of over 300 miles on a single charge.

Toyota has even announced plans to debut EVs with solid-state batteries by 2023.

Another significant innovation is the “structural battery”. Such a battery doubles as a structural part of the vehicle, thereby saving weight and promising dramatic gains in the EV range.

Tesla announced that it would be using structural batteries in its new cars, reducing weight by 10% and increasing range by 14%.

The Paris Agreement set the target to reduce energy intensity for buildings by 30% per square meter by 2030, and have the entire construction industry at net zero carbon by 2050.

In a poll of over 400 industry experts, 90% agreed that sustainability goals will transform the construction and building landscape, with 79% indicating that dramatic shifts are likely in the coming five years.

Greener construction methods such as prefabrication, modularization and digitalization (building information modeling, for example) are paving the way for this change.

Instead of building structures on-site from scratch, these approaches enable elements to be manufactured separately, and combined with customization options, resulting in as much as 30% lower carbon footprints.

From a base of just $2 billion, the North American modular-construction market has grown by a factor of 2.4 over just 3 years.

And more than 45% of housing in Scandinavia already employs modular methods.

The rest of the world is also catching up, with the trend accelerating in Africa and Asia (the use of prefinished modules is already mandatory for all government housing in Singapore, for example).

The use of BIM, which can reduce the environmental impact of construction by as much as 50% or more, is also on the rise, with a 350% increase in adoption post-COVID.

Newer, lower-footprint materials, such as cross-laminated timber in place of steel, ethylene tetrafluoroethylene (ETFE) in place of glass, mycelium (a type of fungus spore) instead of bricks, and advanced materials such as graphene which can reduce concrete usage, all promise to lower our environmental impact and change how we build our structures.

Top-tier construction companies such as Skanska and BAM also intend to reduce carbon emissions by 50 percent by 2030.

Through the use of these new methods, materials, and technologies such as smart buildings, many leading construction companies expect to drive down their carbon footprint by 10%.

HeidelbergCement, one of the world’s largest building materials manufacturers, also announced that it will produce net-zero concrete by 2050.

“ESG investing” refers to a form of financial investing that prioritizes the impact of businesses on Environmental, Social, and Governance criteria, in addition to financial returns.

Although the concept of ESG investing has been around for decades, 2020 was a benchmark year for this movement, thanks to an open letter to the industry released by the global investment company, BlackRock.

While there is no universal definition of “good” ESG practices, and ESG funds have their share of critics, several studies also show the beneficial impact of ESG investing upon climate and social sustainability goals.

A recent example includes a study by The Economist, which found that companies with ESG targets generally had a lower environmental impact than those without such goals.

In 2020 alone, investments in ESG funds more than doubled, crossing $51.1 billion in value.

This explosion of interest in ESG has continued even this year; funds in Europe, for instance, have crossed more than $139 billion, growing more than 18% over the same period last year.

In fact, increasing pressure from shareholders and consumer activists has also led many carbon-intensive businesses to seek greener alternatives.

One such example is climate NGO, 350, which has induced companies to commit more than $11 trillion towards fossil fuel alternatives.

Overall investments in ESG assets are projected to climb upwards of $53 trillion by 2025.

After energy usage, the packaging is probably the next most damaging aspect of human behavior that is affecting the health and the future of thePlanett.

While millions of people around the world may have little or no access to electric vehicles or even conventional transportation, the ubiquitous plastic cover and its other packaging cousins have made their way to even some of the most remote corners of the world.

But in the last five years, the number of countries enacting strict regulations on single-use plastics has more than doubled.

And the tally of countries that have banned their use now exceeds 127.

Companies are also changing practices to suit these regulatory trends.

And Costco put in place a waste reduction and recycling program that diverts more than 600,000 tons of packaging waste per year.

Innocent Drinks, a subsidiary of Coca-Cola, has announced plans to reduce 2,500 tons of plastic bottles by 2023 and switch to 100% recycled or plant-based plastics by 2030.

Carbon Capture, Utilization and Storage (CCUS) refers to a set of technologies that capture carbon dioxide from industrial or other emissions, and either upcycle it by using it for other processes, or store it in geological formations to prevent it from getting into the atmosphere.

The Intergovernmental Panel on Climate Change (IPCC) found that even with the widespread adoption of green energy such as wind and solar, the total amount of carbon dioxide in the atmosphere will still need to be reduced further to mitigate climate change.

This makes CCUS a vital link in the effort to fight climate change; without it, it won’t be possible to limit the rise in average temperature to 1.5 °C above pre-industrial levels.

CCUS is not a new concept but has seen a surge of interest in the last four years.

The number of new CCUS projects underway has more than doubled from 20 to 44, representing over $27 billion in investments.

Data show that CCUS can capture more than 90% of the carbon dioxide from industrial emissions, which translates to dramatic benefits for sustainability.

For example, at a single typical coal power plant, CCUS technology can prevent more than 800,000 tons of carbon dioxide from entering the atmosphere every year.

Innovation in the area of utilization of captured carbon holds the potential to transform CCUS into an economically viable and sustainable process.

At the plant, carbon captured from a coal-fired boiler operated by a fertilizer company is being used to synthesize soda ash – a compound used for a variety of industrial processes, ranging from the manufacture of glass to dyes and food additives.

A promising application for carbon utilization is in the area of building materials, where concrete blocks can be made lighter and stronger thanks to carbon sequestration.

CarbonCure is a startup applying this technology by injecting captured carbon dioxide into concrete, making it stronger and also allowing the use of less cement for a given structure.

One of the silver linings of the pandemic is that environmental awareness amongst consumers, companies, and governments worldwide, seems to have heightened in its wake.

A survey of over 14,000 people worldwide found that 93% report increased concerns related to sustainability and climate change, post-COVID.

Searches related to sustainable products — from clothing to food, automobiles, and even buildings — have gone up 71% in 2021.

This rising tide of interest in sustainable lifestyles has been accompanied by an explosion of activity and innovation, with energy, mobility, construction, finance, packaging, and carbon capture being the biggest shifts towards a healthier planet.

The value of the “green economy” is even projected to grow beyond $90 trillion by 2030.

Overall, this is a massive trend that is almost impossible to ignore.

Home EqualsPlanett is an initiative comprising 15 tangible actions that citizens take on an individual level. These are a step toward a sustainable planet and a healthier lifestyle. The actions promote simple actions like eating home-cooked food, segregating waste, spending time in nature, and so on.

The 15 actions are associated with the UN Sustainable Development Goals and aim to create a better future for all by 2030. Home EqualsPlanett covers areas like Waste Management, Health, creating a Circular Economy, etc.