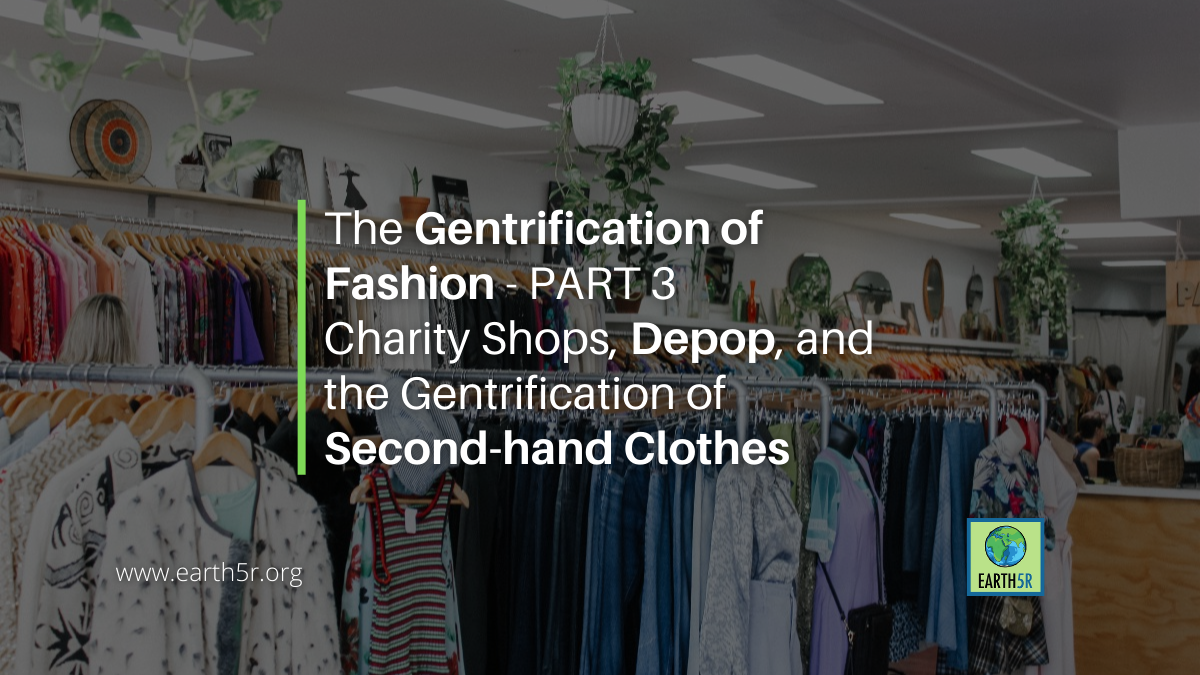 The Gentrification of Fashion – PART 3

Charity Shops, Depop, and the Gentrification of Second-hand Clothes

Charity shopping has become increasingly popular in the past decade, especially amongst young people. This might initially seem like a good thing for the community at large: the charities involved are receiving more money, and the second-hand clothing industry is growing, reducing fashion’s carbon footprint. However, do we need to take a step back to analyze the deeper implications of this rise in popularity? In fact, this trend has led to the gentrification of charity shops – once places of sanctuary for those in need of affordable clothing, now filled with middle-class students looking for designer bargains. The difference is that the wealthier urbanite community does not rely on charity shops as working-class people do – for the latter, it can be a necessity.

The impact of charity shops on the local community is, of course, largely positive; not only do they reduce the impact of fast fashion and raise money for good causes, but they should also act as a center for those in need. However, the rise in prices of charity-shop clothing has forced less well-off individuals into sourcing cheaper alternatives: fast fashion.

In a strange twist of events, and through gentrification, the original purpose of charity shopping has been subverted; middle-class individuals now do their shopping here, whilst the working classes have essentially been forced to buy from fast-fashion retailers offering more affordable prices. Wealthier students have adopted the trend of dressing ‘working-class’, exploiting charity shops, and capitalizing from fashion outlets that were once a major, viable sartorial choice of working-class people. An example of this gentrification of fashion (i.e. dressing ‘working-class’) includes the gentrification of brands such as Dr. Martens and Dickies which were originally meant for workers, but are now fashion brands. This same transition is happening with charity-shop clothing.

The surge in this trend has created a booming market surrounding this type of fashion, charity shops have seen this and increased prices knowing well-heeled students will pay them and there is, therefore, less availability of cheaper clothing for those who have less money. Despite this, the surge in people buying from charity shops means that more money is going into these shops and therefore, more money is going into charities which is inherently positive!

Gentrification is divisive, and leads to classist rhetoric whereby something once ‘owned’ by working-class individuals is taken over by the wealthy and more privileged once it becomes desirable or more trendy. It would therefore be hypocritical to criticize those relying on fast fashion whilst still actively participating in over-thrifting or up-selling on online platforms such as Depop. The difference is having the privilege (money and time) to shop in charity shops without really having to consider the implications of this.

Most students are familiar with the popular clothes-re-selling app Depop, and whilst there is no doubt that Depop has a largely positive influence on the fashion industry, it has likely exacerbated the gentrification of charity shops. In the midst of the first COVID-19 restrictions, Depop’s sales went up by 54% – is this a step in the right direction for displacing the fast fashion industry? Perhaps not, as some Depop sellers buy in bulk from charity shops and then resell these items for extortionate prices, labeling these clothes as ‘y2k’ or ‘vintage’. Additionally, some sellers buy clothes sourced from fast-fashion companies on eBay, posting on Depop: Rare y2k gem!! Insane! Won’t find it anywhere else!… and then up-selling for three times the price. Not only does this buy into the fast-fashion industry, but supports capitalist ideals and is exploitative.

The classist rhetoric caused by gentrification has led to wealthier people imposing their elitist views upon marginalized people, condemning them for shopping in places such as Primark. This was evident on Twitter when shops reopened post-lockdown; the public was not shy to comment on the large queues outside Primark, criticizing people for shopping there. Whilst thrifting in itself is not directly gentrifying fashion, wealthy people take a moral high ground over fashion and sustainability because they have the privilege of doing so is. However, it would be unfair to place the blame onto conscious buyers who do not partake in this slander.

Whilst Depop claims that it is ‘transforming fashion’ it is in fact (probably unintentionally) eliciting an ‘elitist culture’, as some sellers do not follow these rules. The irony is that many people use Depop as a means to reduce their carbon footprint or to find one-off pieces when in reality it is fuelling others to shop unsustainably. Gentrification means that Depop’s claim that it’s a sustainable clothing app is storing up issues for the future.

Do not fear, however! There are many Depop sellers who source their clothes from their own closets or from wholesalers, which is a sustainable practice and does not impact charity shops in this way. Positively, Depop has definitely made people rethink how they should be shopping and provides a platform for designers and sellers who would otherwise find it difficult to make themselves known. The majority of Depop sellers price their items fairly, but there are some exploitative sellers who view reselling items as a lucrative business venture. Greed is never in fashion – in essence, do your research and think twice before you buy!

The inspiration for this article actually came from a TikTok posted by Naomi El, who explains the gentrification of Depop here: https://vm.tiktok.com/ZSg8F2Ed/

Buy Less and Save Water

On average, we only wear garments 7 times before getting rid of them.

The carbon emissions during the production of a t-shirt are 12 times more than the weight of the t-shirt itself.

The amount of water that is consumed and polluted in the processing stages of a product – called its Water Footprint or virtual water – is a looming threat our world can not afford in the face of dire water scarcity experienced by billions around the world every year.

A single cotton t-shirt requires over 2500 liters of water.

And the carbon emissions during production are 12 times more than the t-shirt’s own weight.

Add to this the shipping emissions which come from importing or outsourcing items and you have a recipe for environmental destruction.

In a world with increasing consumerist instinct where the product you desire is a click away, one needs to understand the impact of this single click.

Be a responsible buyer,

The Gentrification of Fashion – PART ...