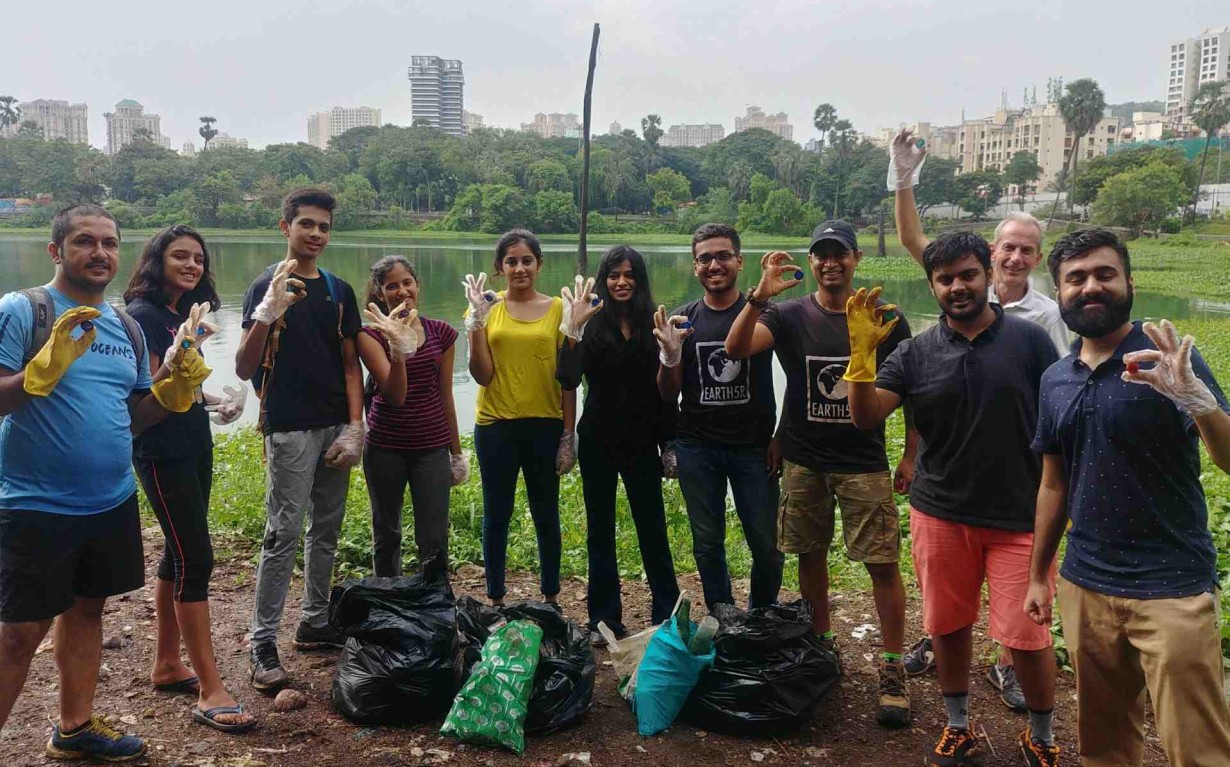 HOW THE TEAM HAS TACKLED THE PLASTIC POLLUTION SO FAR…

Last Saturday, 16th June, the ninth Powai Lake cleanup was conducted under the “ACT Powai” program. Despite heavy rains lashing the city the previous night, numerous volunteers came in willing for the cleanup drive, early in the morning.

The team began the ACT Powai cleanup at Powai Udyaan which is a major hangout location on the periphery of the lake and hence, a hub for dumping waste.

A major aim of the cleanup drive this time was to collect bottle caps. Earth5R has been inspired by nine-year-old Sammie Vance, who started a program wherein bottle caps are recycled and turned into benches. This is a long-lasting, sustainable product that serves a practical purpose. Indeed, no one is too young to create change. We aim to emulate her project in ACT Powai.

Nick Anthony of SEEK Phuket foundation, along with students from Bombay Scottish School joined in the ACT Powai cleanup, collecting as many bottle caps as they could find, which amounted to a whopping 500 by the end of the hour-long cleanup.

WHY PLASTIC POLLUTION IS SO DANGEROUS…

Plastic continues to pour into the world’s lakes, rivers, and oceans. But why should we even care?

When solar radiation hits the floating plastic, incoming ultraviolet rays speed up the process of degradation of the plastic. The plastic is structurally weakened, thereby breaking it into small fragments. With most waste streams, this process is desirable as it indicates that the material will soon decompose.

However, in this case, it is not true decomposition, but mere fragmentation of the plastic into smaller and smaller pieces. Eventually, the fragments are termed as ‘microplastics’ which refers to plastics less than 5mm in size. This is a dangerously small size as it cannot be filtered out of the water. In fact, such plastics are so small that they can be ingested by marine organisms and become part of the food chain!

Many people are now aware of the impact of consuming such fishes, especially its effect on the human digestive system, primarily due to the widespread awareness campaigns run across the world.

However, what most people are unaware of is the issue of nanoplastics. The term refers to plastic pieces smaller than 100 nm in size. These fragments are so small that they can enter the bloodstream of these animals and even alter the DNA structure. This can result in mutations, ultimately leading to various abnormalities and diseases, even cancer.

This is an issue that Earth5R is trying to highlight in ACT Powai, by attempting to clear all plastics out of our lake, preventing further harm to the local ecosystem. Sammie Vance’s innovative idea to create benches out of bottle caps will serve as a way to remove some plastic from the environment permanently.

Collecting the Plastic Pollution from Powai Lake, near IIT Bombay under ACT Powai.

Ketul Patel filling his bag with plastic from the banks of Powai Lake.

The ACT Powai team working in the hot sun.

Segregating the waste to make it easier for waste pickers.

Around 500 bottle caps were collected within one hour for ACT Powai project.

Plastic Pollution- A Global Problem that ...