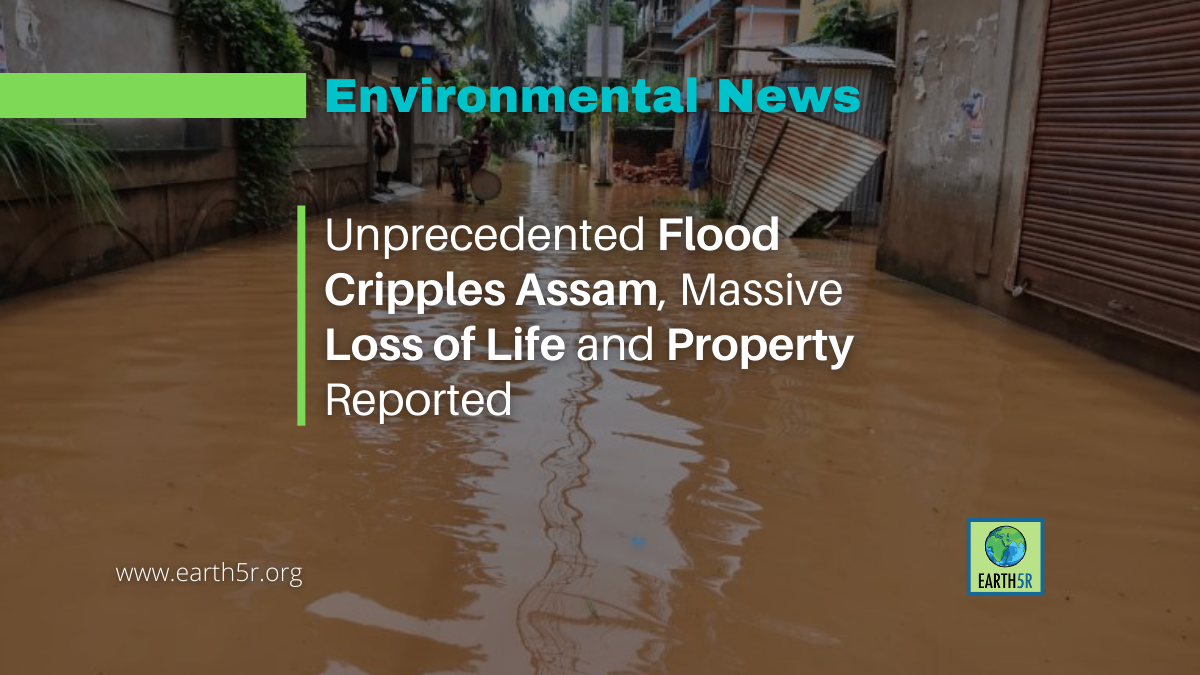 On the edge of National Highway 31 in Assam, where floodwater had completely submerged the paddy fields, 43-year-old Rahisuddin was waiting with his wife and five children. Rahisuddin, a resident of Kakoti Gaon, under the Raha subdivision of Nagaon district in the state was waiting for a boat to go back to his village and check on his house. His family, along with most other Kakoti Gaon residents, had left the village after the first wave of flood in May and was now living, with their cattle and whatever belongings they could bring with them, in makeshift camps made of tarpaulins.

He was bargaining with a boatman who was ferrying people at a fare of Rs. 20 per person. “Won’t give anything more than Rs. 10 per person,” Rahisuddin told the boatman. When asked why he was going back to his village now, he told Mongabay-India that he wanted to take a chance to see if the water has receded a bit. “We left the village after the first wave of flood in May and for the last one month, we have been moving from one place to the other. Like most people in my village, I work as a daily wager and catch fish sometimes, but now because of the flood, I don’t have any employment.”

“Initially, we took shelter at Chapormukh railway station as it was not flooded. Then we moved here to the highway for the last 15 days. It is very difficult living like this with my children. So if the situation in the village improves a bit, I will go back to my house,” Rahisuddin said.

When Rahisuddin managed to reach his mud house with a tin roof, he found the rooms flooded with water up to his chest. When Mongabay-India contacted him over the phone the next day, he said it was impossible to stay there. “We are staying near the railway track on the Chapormukh railway station. Hundreds of other families are also staying at the railway station now.”

Rahisuddin and his family are one of the millions who have been hit by this year’s flood in Assam. As per the latest flood bulletin released by the Assam State Disaster Management Authority (ASDMA), 31,54,556 people in 2,675 villages in 26 districts are currently affected. As many as 3,12,085 people are currently staying in 560 relief camps across the state. The death toll so far is 151.