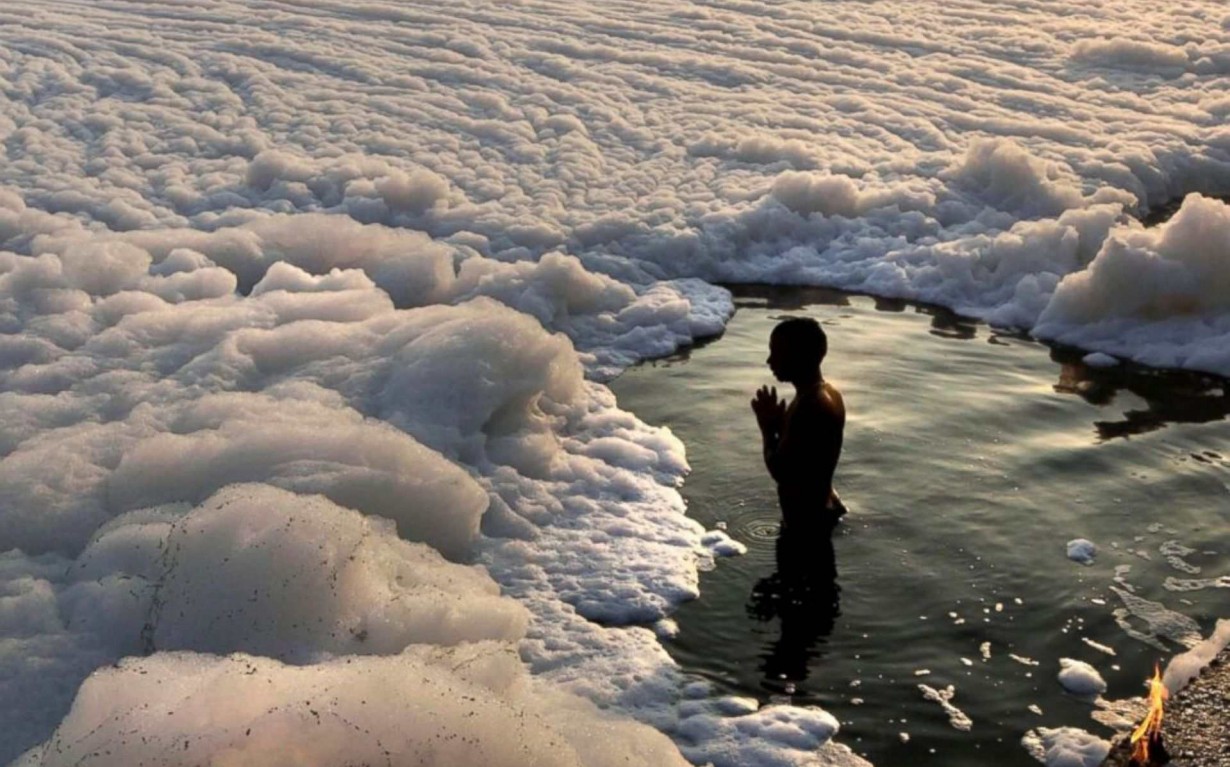 Yamuna River Pollution and Sustainable Solutions for the Future

About 57 million people depend on Yamuna waters as it accounts for more than 70% of Delhi’s water supplies, but today it is also referred to as  ‘Delhi’s dying holy river’.

Children who live along the banks of the Yamuna River hunt for coins and anything valuable they can collect. (David Gilkey/NPR)

Long ago, the waters of Yamuna were pristine blue but today the Yamuna is considered to be one of the severely polluted rivers in the world. The Yamuna is particularly polluted downstream of New Delhi, the capital of India, which dumps about 58% of its waste into the river.

The most pollution comes from Wazirabad, from where Yamuna enters Delhi.

The wastewater mainly comes from household activities hence the presence of high content of detergent, laundry chemicals, and phosphate compounds.

Samples collected were found to have phosphate concentration of 0.51 mg/litre, which is higher than the normal range of 0.005 to 0.05mg/litres.

This abundance of phosphate formed layers of toxic froth covering the rivers.

The catchment area of River Yamuna in Delhi is highly urbanized and is networked with several drains. Najafgarh and Shahdara drains are the major drains that discharge a heavy load of pollutants into the river.

Rapid urbanization and population growth results in industrialization pose a major threat of heavy metal pollution for nearby water bodies. The water quality monitoring of River Yamuna has indicated a significant presence of several heavy metals in its water.

Among the heavy metals investigated in the River Yamuna water, Iron (Fe) was found to be most abundant and even exceeding the limit.

Sewage that is treated before being released into the river accounts for only 35% of the total estimated sewage discharge.

Although Sewage treatment plants (STPs) have been constructed in various parts of Delhi, the treated, or partially treated sewage from these STPs is continuously being discharged directly or through the carrier drains into the river.

Immersion of idols during festivals with cheap lead and chrome paints and plaster of paris and puja articles such as polythene bags, foam cut-outs, flowers, food offerings, decorations, metal polish, plastic sheets, cosmetic items all are a cause for concern for the river’s quality.

Post-immersion, the Central Pollution Control Board (CPCB) found that the level of heavy metals such as chromium and iron increased significantly.

If the water is not treated, it will increase the chance of toxins entering the food chain through vegetables grown on the floodplains. The toxicity of heavy metals can damage the brain, lungs, kidney, liver, other vital organs functions and alter blood composition.

In Agra, the Yamuna has been choked by intense plastic pollution. After the 2017 ban on single-use plastics, there has still been rampant use of plastics which is evident by the production of plastic.

Along the river, anything from flip-flops to paper products lay in piles every few feet and a lot of plastic bags, even recyclable ones, end up in the river.

Dr Anil Kumar, director at the state environment department, said plastics enter the river mostly through open drains in which people dispose of their waste.

CORONAVIRUS AND ITS EFFECTS ON YAMUNA

PROJECTS AND PLANS FOR YAMUNA

The project is divided into 3 parts:

The plans were carried out by the National River Conservation Directorate (NRCD), Ministry of Environment in collaboration with various State Department.  The plan focused on two types of actions which are Sewerage and non-sewerage facilities.

Sewerage: construction of 29 STPs 58 pumping stations and 179 km of sewers was proposed.

Non-sewerage: 1282 public toilet complexes, 96 crematoria, Riverfront development, plantation and public awareness and participation were proposed. A study on river pollution to estimate future pollution loads of the river Yamuna from different sources.  The total sewage treatment capacity created under YAP I was 750MLD.

YAP II was mostly to undertake non-sewerage part of the objectives.

The total STP capacity sanctioned under YAP II was 189 MLD. The total budget sanctioned: INR. 6.24 billion.  There was an emphasis on Public Participation & Awareness, Public Relations and Institutional Strengthening & Capacity Building of MCD. A Master Plan and Feasibility Study was also carried out.

Organized by the Public Health Department and covers 15 towns including Gurgaon, Faridabad, Yamuna Nagar, Karnal, Panipat, and Sonepat. Its objectives are to control the discharge of raw sewage into the river.

Initiative that has been done are:

Started in 2000 and the objective is to clean the pollution in the Yamuna River throughout its course and to create a better ecosystem in New Delhi. On World Water Day, 2010, local team members, students, and activists in Agra, Hyderabad, and Delhi, India, along with Wuhan, China led several watershed cleanup projects.

Volunteer group started by newspaper hawker Ashok Upadhyay to do his bit in protecting the river from further pollution.

On the last Sunday of every month, Upadhyay comes to the Chhath steps of the river near to clear the waste accumulated on the banks. He is joined by about 100 other newspaper hawkers of the city who have taken upon themselves to be the change that they want to see.

Delhi newspaper hawker cleaning up the river near ITO (IANS)

What can be done at the administration level

What can be done at the Community Level

THE EARTH5R CIRCULAR ECONOMY BASED SOLUTIONS

Earth5R works with citizens to tackle sustainability issues that affect their local ecosystem. One of the initiatives that Earth5R has done is in the Yamuna River.

15-20 volunteers from Earth5R went to the Yamuna River where they were shocked to find how utterly lifeless the river looked due to the pollution. The water was dark and there was trash everywhere. It was clear that their waste management strategies (or lack thereof) have not been successful.

The volunteers spread out and cleaned up as much of the area that they could. As a result, about 2-3 full bags of plastic and other rubbish were collected from just that small area alone. The waste was then given to the ragpicker who then is able to recycle it and earn some livelihood.

Earth5R Team handing over rubbish collected from the cleanup (Earth5R)

This is one example of a circular economy model. As it brought social, economic and environmental impacts.

By establishing circular economy based programs that are an alternative to a traditional linear economy (make, use, dispose) and have active collaborations with the local community, local problems like bad waste management can be turned into opportunities for the local community.

Earth5R’s Global Sustainability Hub is a cross-sector and cross-country collaboration in pursuit of UN Sustainable Development Goals. It is an excellent opportunity for governments and the private sector to engage with communities, use Sustainability-based models to drive economic changes and create social and environmental impact