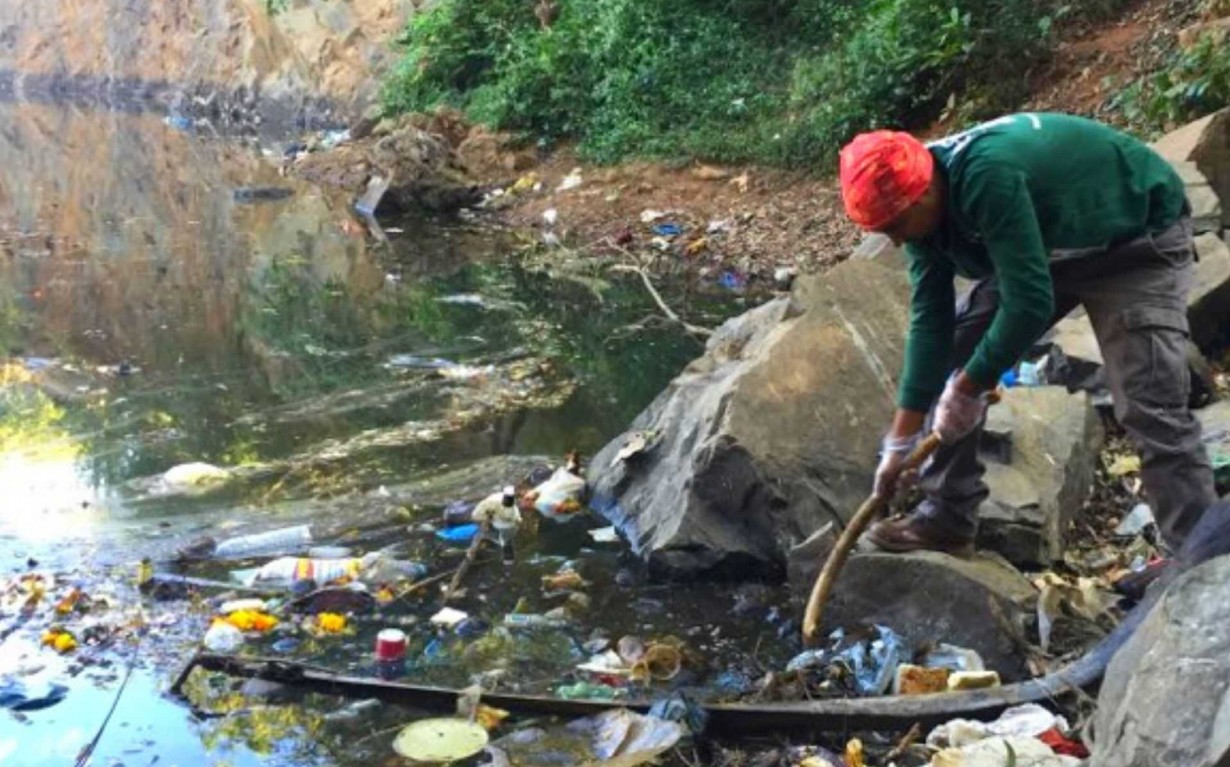 Water bodies comprise a major chunk of the Indian subcontinent. However, the grim reality is that most of these water bodies, from Ganges, the longest river, to seasonal lakes have fallen prey to extreme pollution.

In the light of this condition, it is the need of the hour for us to tackle this problem and conserve our precious water resources. It was just this thought of Earth5R Team which gave birth to a major lake-cleaning operation in Thane.

It was just a few months before this project that Earth5R’s team visited Yeoor hills in Thane district for the purpose of waste management. While working on it, they happened to view Yeoor lake which is situated on the foothills of these hills. It was extremely filthy and filled with garbage. A few animals and birds also came by the lake to drink this potentially fatal water. Determined to take up this issue, a project for cleaning Yeoor Lake was conceptualized.

The team of Earth5R, including Saurabh Gupta, the founder; along with Khushbu Chotalia, Sagar Kulkarni, Abhishek Gawande, Jahaan Gupta, Mayur Raje, Nikita Shrawagi  ,Ankita Shah, Kaksha Mahudkar, Sharad Vegda, Manish Jha, Amol Prasadi, Gandhar Nimkar and Aniket Patil, visited Yeoor Lake on 15th December 2015 with the objective to clean it. Starting early in the morning, they were ‘greeted’ by loads of all sorts of waste lying in the lake. From puja waste materials to used alcohol bottles, the lake had it all.

The team was carrying huge garbage bags to collect the waste materials. They used sticks lying about to pull in waste to the edge of the water from where they could easily dump it in the bags. Shockingly, a car seat was also part of the debris lying in the lake. The cleaning activity went on for quite a few hours till early noon.

Within a few hours of clearing the lake of its waste, these people noticed more birds and butterflies hovering above, clearly indicating an improvement in the water quality. As they were about to leave the place, they noticed a few men walking towards the lake with puja waste in their hands.

Understanding that these people were here to dump the waste, Earth5R’s team seized the opportunity to educate these people regarding waste management. They told them how dumping waste into the lake can prove harmful for the adjoining flora and fauna; and to dispose them off in a safe manner. They succeeded in convincing the men to not throw garbage here henceforth. The men also promised to go back and enlighten the people of their locality.

A few children also came by the lake to swim, visibly pleased with the now-changed face of the lake. They also promised the team to protect the lake from getting polluted.

Thus, with this activity which was a lot of fun as well as involved hard work, Earth5R succeeded in cleaning Yeoor Lake. Earth5R has sent forth a very important message to the society in terms of conservation of water bodies. It is every individual’s duty to contribute in a similar manner and give back to our earth.

Addressing the Plastic Waste Crisis at ...