Cloud computing is a concept of sharing services over a network to maximize the effectiveness of the resources. These resources are shared by multiple users all over the world, thus maximizing the computing power and reducing environmental damage. For example, a cloud computer facility that serves European users during European business hours with a specific application (e.g., email) may reallocate the same resources to serve North American users during North America’s business hours with a different application (e.g., a web server).

Some of the reasons why more and more people every day are opting for cloud computing is that it is cost efficient specially for startups since there is no need for them to buy new hardware, software or license. They can get all this on cloud and just start working on their ideas. Project management can also be done effectively from anywhere in the world by a team which might not be located at the same place.

Apart from this cloud computing is environmentally a better choice. More and more organizations are emphasizing on lowering their carbon footprint to develop a long term strategy of a sustainable growth without harming the environment. Cloud presents a lot of benefits to this effect. Instead of every company using their own hardware,  company shares same hardware to increase utilization. Further, Servers are kept in climate controlled room where temperature and humidity level are carefully maintained, and cloud providers can use high-density efficient layouts that are hard for in-house centers to replicate. Smaller companies where money is a major deciding factor are likely to overlook an energy-saving equipment for a cheaper one. Cloud eliminates this problem by providing same equipment to all companies.

A 2010 study from Microsoft, Accenture and WSP Environment and Energy found that moving business applications to the cloud could cut the per-user carbon footprint by 30 percent for large, already-efficient companies and as much as 90 percent for the smallest and least efficient businesses. 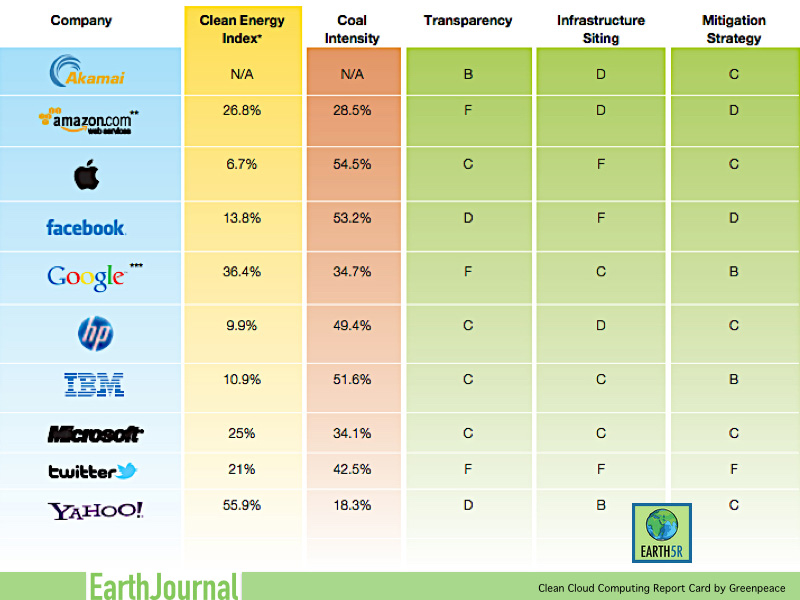 Lawrence Berkeley National Laboratory and Northwestern University conducted a six-month study, funded by Google, in which they found that moving common software applications used by 86 million U.S. workers to the cloud would amount to cutting the energy use by 87% which can power Los Angeles for a year, the report said. Data center energy consumption is expected to drop by 31 percent from 2010 to 2020 due to the continued adoption of cloud computing.

Even though these reports seem very promising an important thing to remember is that these centers must draw their power from renewable sources of energy. Two fast-growing companies in Iceland, Green Earth Data and GreenQloud, for example, both claim to offer 100 percent renewable energy, powered by the country’s abundant geothermal and hydropower resources.

According to this report, titled: How dirty is your data? A look at the energy choices that power cloud computing, the data centers that power cloud computing account for about 2 percent of global energy demand and are growing their energy consumption at a rate of about 12 percent per year. According to Greenpeace, most of the energy consumed (50-80 percent) comes from coal and nuclear energy rather than renewable sources.

Greenpeace analyzed the cloud performance of 10 leading tech companies: Apple, Facebook, IBM, Amazon, Google, Microsoft, Twitter, Yahoo!, HP and Akamai. Of these, Apple scored the lowest while Akamai and Yahoo! were ranked as the most environment-friendly, or, rather, the least environment-damaging.

Google is encouraging wind and solar projects by creating the subsidiary Google Energy that can buy electricity directly from independent renewable power producers (IPPs). It’s building data centers around the world to help support its growth and tries to use renewable to reduce its energy consumption.

If the cloud is located in areas that source renewable power, cloud computing can not only save billions of dollars in energy costs it can also reduce carbon emissions by millions of metric tons. If you are thinking of shifting your business to cloud, spare 2 minutes to find out the greener choice. One small stone thrown in water can create many ripples.

Deepti Chauhan graduated in Computer Science from Delhi College of Engineering after which she worked with Samsung as a software developer for 2 years. Deepti joined Earth5R to build changes that she wanted to see around herself, for the society and for the planet. She feels that to change the world we should start changing ourselves.