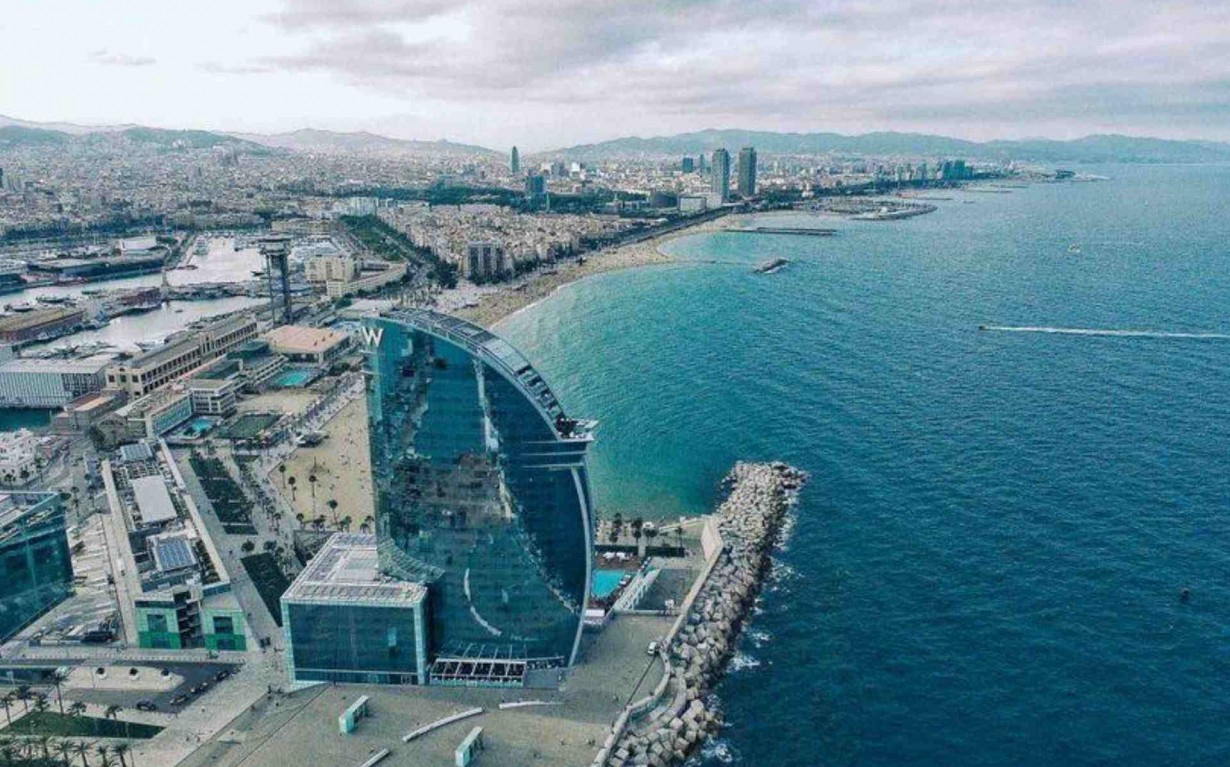 Environmental Impacts of Tourism in Barcelona: Can Circular Economy Make the City Sustainable?

As beneficial as it might seem for Barcelona’s economy, the tourism sector has begun to do more damage than good, destroying their environment and robbing the quality of life of its residents.

The fourth most visited European city, with a population of 1.6 million within city limits, Barcelona is a major cultural, economic and financial centre in the Mediterranean region. It witnessed an increase in overnight visitors from 1.7 million in 1990 to 8 million in 2016.

The city of Barcelona has very little green cover, owing to the population(Pinterest, Aween Ramli)

Barcelona city’s development in these sectors has a dark side, based on the concrete interests of political and economic elites, which has resulted in the commodification of life in the city.

THE CITY OF TOURISTS, OR CITY FOR TOURISTS?

The promotion of Barcelona as a brand, making it the largest tourist affluence in the world,  has been continuing since the 1992 Summer Olympics by the public-private consortium Turisme Barcelona. The tourism that was initially perceived as a creator of jobs, is now resented by the local residents due to widening social inequalities and conflicts the industry entails.

Locals perceive tourists as a nuisance, the reason for their poor quality of life. (Bloomberg)

Poor Quality of Life for Residents

Barcelona’s entire economy has moulded itself to service the large number of tourists visiting the city every year.

Barcelona’s beaches are crowded with tourists, who are mainly responsible for the plastic pollution(RNZ)

A VICTIM OF AIR POLLUTION

Hand in Hand with Tourism : The Aviation Sector

International aviation has a large role to play in the development of the tourist industry in Barcelona. The non-existent taxation on aviation, cheap tickets, an increase in connections, and public investment in airports have contributed to the development.

Barcelona’s airport during peak season, affected by a strike (The Mirror)

In 2018, more than 3 million tourists visited Barcelona on cruise ship tours, making the city Europe’s biggest cruise destination ahead of other top ports including Palma de Mallorca, Venice or Southampton.

Cruise ship visitors have been as high as 18,000 passengers a day who spend only a few hours in the city (Cruise Mapper)

On a single day, seven ships with 18,000 passengers and 6,000 crew were docked in the port. Most passengers visit the city for around five hours, spending an average of €57 each, and return to their ships at night.

In June 2019, Barcelona was named the number one most polluted ports in Europe. Cruise ships produced 32.8 tonnes of sulphur oxide (SOx), five times more than all of Barcelona’s cars.

Locals stage a protest against cruise ships and cruise tourists, who the tourism industry mainly caters to. (EL PAIS)

Overall, Spain is also the most cruise-polluted European country, with 14,496 metric tons of sulfur oxide released in 2017.

No Road for Residents?

A growing number of private vehicles to support the ever growing tourism industry, promoting “quality tourism”  is another major polluter for Barcelona. In addition, the building of ring roads has increased use of private vehicles. This has made mobility and public transport less available to the local population.

ROUND THE CLOCK NOISE POLLUTION

Over half of Barcelona’s population is subjected to harmful noise levels over 65 decibels during the entire day (0800-2200 hours).

Noise pollution in the city is rarely below 65  decibels.

Barcelona residents produce as much as 500 kilograms of waste per capita per year, and most of this is owed to the booming waste generated by tourists (Publicspace)

Immigration, unemployment,, as well as poverty have led to a high prevalence of homelessness. A number of slums, shantytown housing, and degraded multi-family residences can be found across the city.

On any given night, approximately 1,500 people in Barcelona experience homelessness.

A large number of residents live on less than 1000 euros a month.

INITIATIVES BY THE CITY’S ADMINISTRATION

Solving the  Problem of Homelessness

Barcelona city administration works towards social inclusion by having professionals in the streets each day, identifying homeless people in the initial phases of their problems.

The International Maritime Organization limits the amount of sulphur in fuel oil to 3.5%. A new limit of 0.5% will come into force.Under the European Union’s clean air policy, the limit in the Mediterranean may be reduced to 0.1%.

A new mobility plan was introduced by the city government of Barcelona, based on creating superblocks in the urban spatial plan.

Friends of the Earth is an umbrella organization supporting more than 300 NGOs. (Amigos de la Tierra)

Ecologistas en Acción is a non-governmental umbrella organisation of more than 300 environmental NGOs. It works to build public awareness, relying on outreach to traditional news media, a strong presence on social networks, production and dissemination of video content via their video channel and El Ecologista magazine.

Two spanish companies, Iberdrola and Acciona have been elected in the Global 100 of

Acciona is a sustainable conglomerate organization, facilitating infrastructure, water and energy needs through innovative and responsible solutions in business.

They are on track with meeting their 2020 sustainability goals.

Iberdrola is committed to become carbon neutral by the year 2050. (Financial times)

Iberdrola  is a Spanish multinational electric utility company serving around 31.67 million customers. Iberdrola group has committed to reduce absolute Greenhouse Gases emissions by 2030 from a 2017 base-year and to be carbon neutral by 2050 at a global level.

THE BENEFITS OF A CIRCULAR ECONOMY

Globally, the economy would benefit $2 trillion a year from circularity.

Sharp increase in commodity prices in the 2000’s due to exploitation of resources (WE Forum, 2017)

HOW WILL A CIRCULAR ECONOMY BENEFIT BARCELONA?

Public policies on the circular economy by the City Council have on average generated over 9400 direct and indirect jobs a year in Barcelona, specially in urban greenery (69%) and mobility (12%).

Being a small and densely populated city, Barcelona has the need to utilize available space sustainably.

Bike sharing has become popular in the city, allowing residents and tourists alike to explore the city without  (Ajuntament de Barcelona)

The above measures work on improving the quality of life for the local residents of Barcelona, and help in increasing per capita income.

If WHO  guidelines are met, 932 to 3000 cases of asthma could be prevented in Barcelona each year.

Earth5R’s ACT project involves citizens in meeting needs and addressing sustainability issues that affect their local ecosystem. If the solution is not local, it is not sustainable.

The Earth5R team conducted a mangrove clean up drive at Bandra Carter Road in January 2019. It took off successfully thanks to the youth of Bandra including local citizens and members of Rizvi NSS.

The volunteers recovered large amounts of waste which was then segregated, analysed and sent further for recycling.

Sustainable Solutions for Pollution in the ...

Plantation Workshop for the Future Generation