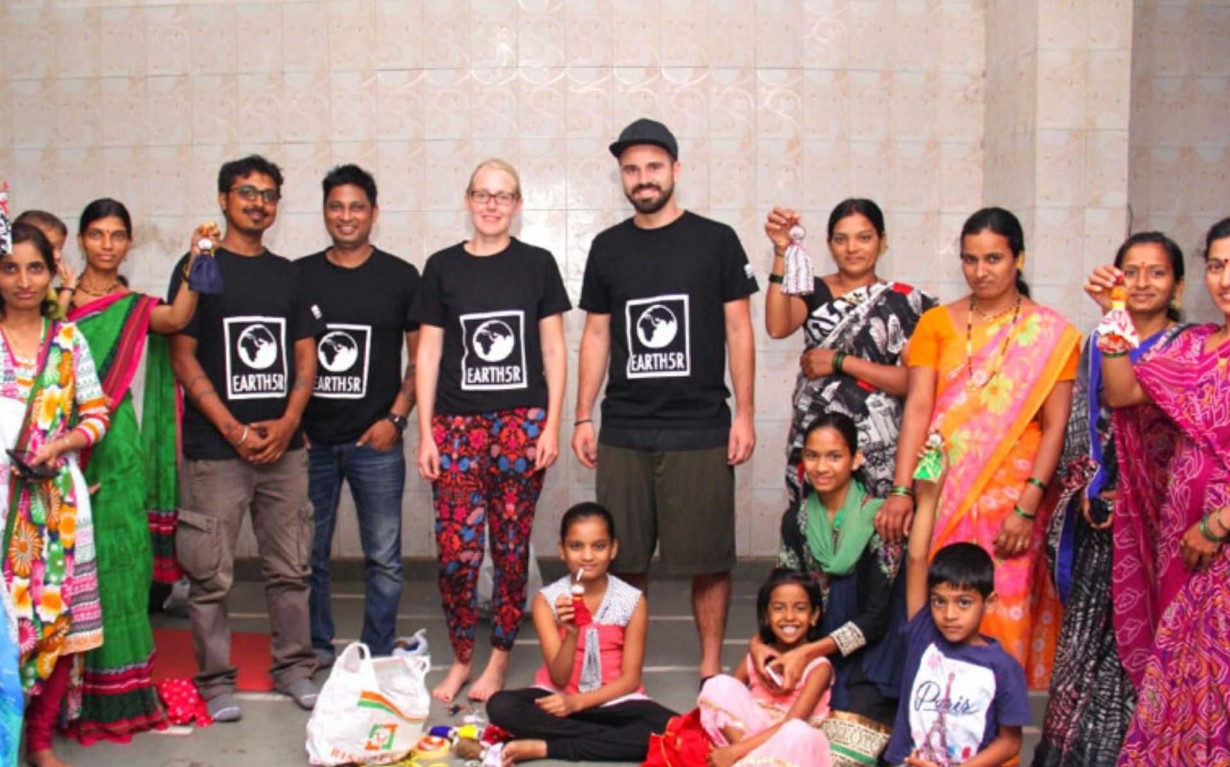 “It is by riding a bicycle that you learn the contours of a country best, since you have to sweat up the hills and coast down them.”

Team Earth5R could not agree more. The idea of this project was to do a bicycle ride to villages for sustainable livelihood training from Mumbai to Pune. On this route the team would visit various small villages and carry out workshops to empower women in sustainable livelihood. With the concept of waste reduction and recycling in mind, we wanted to teach the women in creating coffee dolls. Coffee dolls are made out of wasted coffee and clothes.

Meet Carla Mourão da Graça, Maximilian Berens, and Sina Maurer – Earth5R volunteers from Portugal and Germany – who came to India to do volunteering work with Earth5R in projects concerning environmental issues and sustainability.

They collaborated with the local team and chalked out the entire execution for the 3-day bicycle ride for sustainability from Mumbai to Pune.

On Sunday, October 23rd the team started their ride at 6 am. After preparing their bikes they reached Khopoli, where the climbing part of the tour was to begin. The serpentines and the heat became a challenge that they mastered and ended up reaching the first village Waksai one hour earlier than planned. After a refreshing shower, the team conducted their first coffee dolls workshop for the ride. The women here were eager to learn and very talented, and the day saw some beautiful coffee dolls by the end of the workshop.

The team had a dialogue with the village men,  demonstrating to the men that their programs were impacting knowledge and awareness among communities, helping to convince village elders to allow women to work, and promoting entrepreneurial possibilities for the women to support themselves and their families. The women at the village now have a better chance to keep their own children in school and break the cycles of poverty, lack of education, early marriage, and healthcare issues.

Next morning, the trip started at 6.30 pm to the next village – Gahunje. The team received a hearty welcome at the office of the village and after a tasty lunch, it was time for the second coffee dolls workshop. Here too the women were greatly interested in making coffee dolls and to no surprise, their coffee dolls looked much better than the team’s.

Directly after this workshop, the bicycle ride team went to Shirgaon village. The team did the workshop with village kids who were very keen on learning a new art that also helps the environment. During the workshop more and more women of the village came and joined the workshop. It was very refreshing for the team to watch the children’s enthusiasm and curiosity.

The last village was Sangavade. Here the team got to conduct their workshop in the village temple. The women were very nice and invited the team to their home for tea and sweets, making them feel very welcome. The team was allowed to sleep at the temple and after such a long day was happy to find a place to rest and sleep. The next morning they had planned on waking up at 6 am, but something unexpected happened. They were up at 4 am because the people of the village came to the temple to sing and make music. So the team got the opportunity to get real cultural insights – despite being a little tired.

At 7 am the riding team started their last ride to Pune. Here they received a warm welcome from Deepesh Sodhi, the founder of Fluidonomics. They were relieved to get a shower, a tasty meal and someplace to rest before the river cleaning at the Mula-Mutha River started.

The power of volunteers and local communities to change their own lives can be limitless.

The Earth5R team quite literally sweat up the hills, learning a lot about village culture, and giving a few skills back to the women who could train a population in raising families themselves.

Clean-up at Lalbagh Bangalore by Earth5R

Can the Circular Economy Save the ...