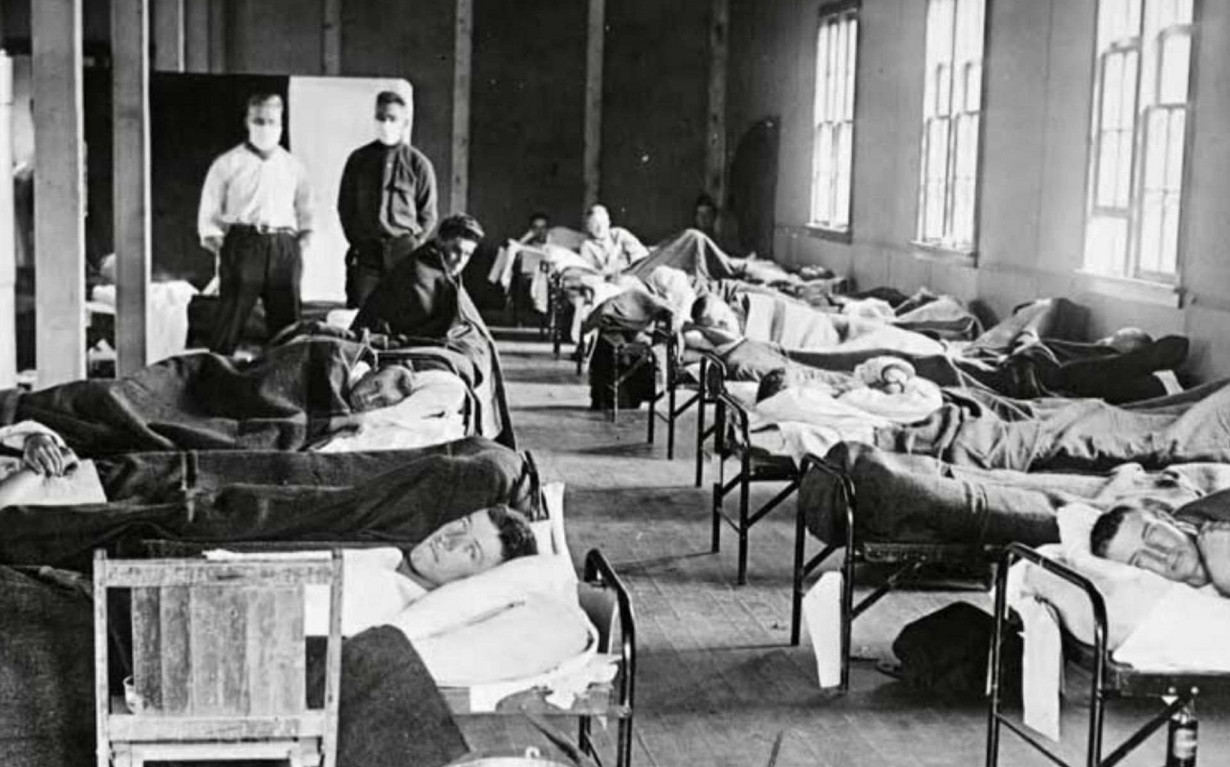 The novel coronavirus pandemic, known as Covid-19, could not have been more predictable. Over the past 15 years, there has been no shortage of articles and white papers issuing dire warnings that a global pandemic involving a new respiratory disease was only a matter of time.

It’s important to look back in history and learn from it.

Scientists and medical researchers have for years have differed over the exact definition of a pandemic (is it a pandemic, or an epidemic), but one thing everyone agrees on is that the word describes the widespread occurrence of disease, in excess of what might normally be expected in a geographical region.

Cholera, bubonic plague, smallpox, and influenza are some of the most brutal killers in human history. And outbreaks of these diseases across international borders, are properly defined as pandemic, especially smallpox, which throughout history, has killed between 300-500 million people in its 12,000 year existence.

Beginning in December 2019, in the region of Wuhan, China, a new (“novel”) coronavirus began appearing in human beings. It has been named Covid-19, a shortened form of “coronavirus disease of 2019.” This new virus spreads incredibly quickly between people, due to its newness – no one on earth has an immunity to Covid-19, because no one had Covid-19 until 2019. While it was initially seen to be an epidemic in China, the virus spread worldwide within months. The WHO declared Covid-19 a pandemic in March, and by the end of that month, the world saw more than a half-million people infected and nearly 30,000 deaths. The infection rate in the US and other nations was still spiking.

With the coronavirus pandemic, people all over the world have become more aware of the best practices during a pandemic, from careful hand-washing to social distancing. Countries across the world declared mandatory staty-at-home measures, closing schools, businesses, and public places. Dozens of companies and many more independent researchers began working on tests, treatments, and vaccines. The push for the human race to survive the pandemic became the primary concern in the world.

The outcome of the Covid-19 pandemic is impossible to predict, at the time of this writing. But we can learn from pandemics in history to determine our best courses. These are our teachers – the Spanish flu, the AIDS pandemic, and more.

First identified in Democratic Republic of the Congo in 1976, HIV/AIDS has truly proven itself as a global pandemic, killing more than 36 million people since 1981. Currently there are between 31 and 35 million people living with HIV, the vast majority of those are in Sub-Saharan Africa, where 5% of the population is infected, roughly 21 million people. As awareness has grown, new treatments have been developed that make HIV far more manageable, and many of those infected go on to lead productive lives. Between 2005 and 2012 the annual global deaths from HIV/AIDS dropped from 2.2 million to 1.6 million.

HIV/AIDS is considered by some authors a global pandemic. However, the WHO currently uses the term ‘global epidemic’ to describe HIV.

A category 2 Flu pandemic sometimes referred to as “the Hong Kong Flu,” the 1968 flu pandemic was caused by the H3N2 strain of the Influenza A virus, a genetic offshoot of the H2N2 subtype. From the first reported case on July 13, 1968 in Hong Kong, it took only 17 days before outbreaks of the virus were reported in Singapore and Vietnam, and within three months had spread to The Philippines, India, Australia, Europe, and the United States. While the 1968 pandemic had a comparatively low mortality rate (.5%) it still resulted in the deaths of more than a million people, including 500,000 residents of Hong Kong, approximately 15% of its population at the time.

Asian Flu was a pandemic outbreak of Influenza A of the H2N2 subtype, that originated in China in 1956 and lasted until 1958. In its two-year spree, Asian Flu traveled from the Chinese province of Guizhou to Singapore, Hong Kong, and the United States. Estimates for the death toll of the Asian Flu vary depending on the source, but the World Health Organization places the final tally at approximately 2 million deaths, 69,800 of those in the US alone.

Between 1918 and 1920 a disturbingly deadly outbreak of influenza tore across the globe, infecting over a third of the world’s population and ending the lives of 20 – 50 million people. Of the 500 million people infected in the 1918 pandemic, the mortality rate was estimated at 10% to 20%, with up to 25 million deaths in the first 25 weeks alone. What separated the 1918 flu pandemic from other influenza outbreaks was the victims; where influenza had always previously only killed juveniles and the elderly or already weakened patients, it had begun striking down hardy and completely healthy young adults, while leaving children and those with weaker immune systems still alive.

Like its five previous incarnations, the Sixth Cholera Pandemic originated in India where it killed over 800,000, before spreading to the Middle East, North Africa, Eastern Europe and Russia. The Sixth Cholera Pandemic was also the source of the last American outbreak of Cholera (1910–1911). American health authorities, having learned from the past, quickly sought to isolate the infected, and in the end only 11 deaths occurred in the U.S. By 1923 Cholera cases had been cut down dramatically, although it was still a constant in India.

Originally the “Asiatic Flu” or “Russian Flu” as it was called, this strain was thought to be an outbreak of the Influenza A virus subtype H2N2, though recent discoveries have instead found the cause to be the Influenza A virus subtype H3N8. The first cases were observed in May 1889 in three separate and distant locations, Bukhara in Central Asia (Turkestan), Athabasca in northwestern Canada, and Greenland. Rapid population growth of the 19th century, specifically in urban areas, only helped the flu spread, and before long the outbreak had spread across the globe. Though it was the first true epidemic in the era of bacteriology and much was learned from it. In the end, the 1889-1890 Flu Pandemic claimed the lives of over a million individuals.

Generally considered the most deadly of the seven cholera pandemics, the third major outbreak of Cholera in the 19th century lasted from 1852 to 1860. Like the first and second pandemics, the Third Cholera Pandemic originated in India, spreading from the Ganges River Delta before tearing through Asia, Europe, North America and Africa and ending the lives of over a million people. British physician John Snow, while working in a poor area of London, tracked cases of cholera and eventually succeeded in identifying contaminated water as the means of transmission for the disease. Unfortunately the same year as his discovery (1854) went down as the worst year of the pandemic, in which 23,000 people died in Great Britain.

From 1346 to 1353 an outbreak of the Plague ravaged Europe, Africa, and Asia, with an estimated death toll between 75 and 200 million people. Thought to have originated in Asia, the Plague most likely jumped continents via the fleas living on the rats that so frequently lived aboard merchant ships. Ports being major urban centers at the time, were the perfect breeding ground for the rats and fleas, and thus the insidious bacterium flourished, devastating three continents in its wake.

Thought to have killed perhaps half the population of Europe, the Plague of Justinian was an outbreak of the bubonic plague that afflicted the Byzantine Empire and Mediterranean port cities, killing up to 25 million people in its year long reign of terror. Generally regarded as the first recorded incident of the Bubonic Plague, the Plague of Justinian left its mark on the world, killing up to a quarter of the population of the Eastern Mediterranean and devastating the city of Constantinople, where at its height it was killing an estimated 5,000 people per day and eventually resulting in the deaths of 40% of the city’s population.

Also known as the Plague of Galen, the Antonine Plague was an ancient pandemic that affected Asia Minor, Egypt, Greece, and Italy and is thought to have been either Smallpox or Measles, though the true cause is still unknown. This unknown disease was brought back to Rome by soldiers returning from Mesopotamia around 165AD; unknowingly, they had spread a disease which would end up killing over 5 million people and decimating the Roman army.

Covid-19 caused by Coronavirus shows how vulnerable we remain – and how we can avoid similar pandemics in the future if we learn from the history of pandemics.

No wonder militaries have long tried to harness disease as a tool of war. No wonder that, until recently, far more soldiers died of disease than died in wars. By the end of first week of April 2020 USA had more fatalities than six wars combined.

A pathogen is a perfectly economical weapon, turning its victims into its delivery system.

Earth5R is conducting large scale online training on COVID 19 Coronavirus prevention, response, management and self-sustainability. These trainings are conducted on digital platforms in regional languages across India and other countries.

Sustainable Food: Moving Towards a Healthier ...