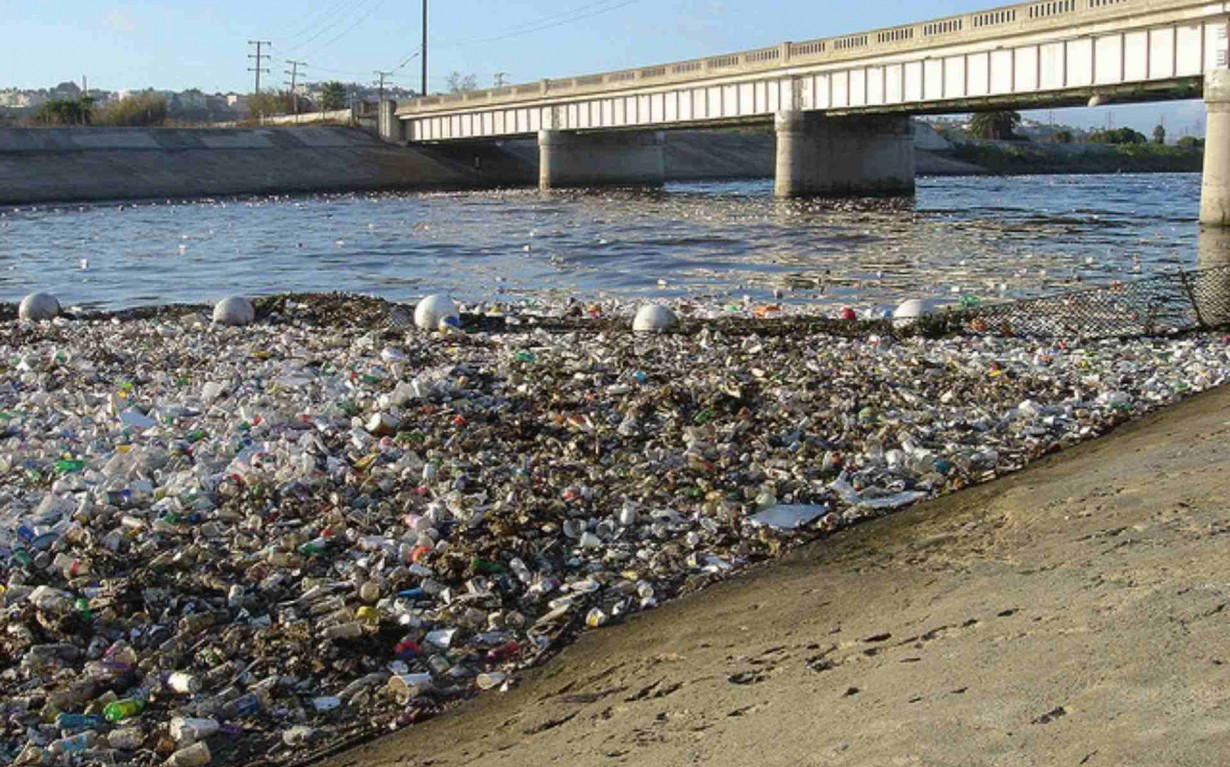 An Earth5R Approach to Pollution in the Los Angeles River

Starting in the San Vernando Valley, the Los Angeles River is a 51 miles long waterway that snakes through 11 cities in LA County before emptying out in the Pacific Ocean. There are over 21 identified pollutants in the LA River that exceed federal guidelines, the majority of which come from runoff that accumulates during rainwater flow.

The Los Angeles Regional Water Quality Control Board has reported that these include “ammonia, a number of metals, coliform, trash, scum, algae, oil, chlorpyrifos as well as other pesticides, and volatile organics”.

There is significant plastic debris from the packaging that flows into the river during periods of rainfall and accumulates in the Santa Monica Bay.

Wastewater treatment constitutes a significant share of the water in the river. Rainfall from the Santa Monica, San Gabriel, and Santa Susana Mountains surrounding the water basin periodically replenish the river.

From there, treated wastewater is discharged into the Pacific Ocean. The 2012 Los Angeles River report found that the plants were meeting water quality objectives for dissolved metals, fecal indicator bacteria, and suspended solids but ammonia and nitrate levels in the water were elevated. For the most part, the processed water released into the river is considered clean.

However the majority of pollutants in the river can be attributed to stormwater pollution. Unlike sewage, which is heavily regulated and monitored by local governments, stormwater runoff is considerably more polluted and directly flows into the LA River every time it rains in the region.  Since 60% of LA is paved, most rainfall is not absorbed on land and instead runs off into the river.

The lack of precipitory absorption means that a majority of rainfall in LA is not cleaned through groundwater filtration. Harmful pollutants that aggregate in rainfall, like toxic chemicals in herbicides, lawn fertilizers, grease, and engine oil, therefore become concentrated in the river.

The map above, created by a local organization called the LA River Index that monitors the river’s water quality, examines the major drivers of stormwater pollution.

By examining “cleanup sites, impaired water bodies, groundwater threats, hazardous waste facilities and generators, and solid waste sites and facilities”, the LA River Index was able to draw up a map of where stormwater pollution is most concentrated.

The map indicates that as urban density increases in the lower part of the river, the higher the potential for stormwater pollution in runoff.

A LITTLE HISTORY: HOW DID THE POLLUTION GET SO BAD?

The first Spanish settlers of LA settled on an ecologically vibrant section of the LA River near the Arroyo Seco in 1781. For over 100 years the river was the main water source for the burgeoning city.

Yet by 1900, the river became so polluted by industrial dumping and untreated sewage, that LA started looking elsewhere for water. In 1938, a devastating flood surged through LA and residential developments that were built perilously close to the river were devastated.

96 people died and more than 1000 homes were destroyed. A large portion of the lower river was paved over by the US Army Corps of Engineers following the flood. Though the concrete embankments helped control flood surges, the 3.8 million pounds of concrete used in the Army Corps project killed off much of the wildlife including frogs, fish, and birds. Steelhead trout, which were once plentiful in the Los Angeles River, stopped spawning their young and now the species is on the verge of extinction.

For more than 50 years the LA community was virtually cut off from the river by fences that warned of flood dangers.

Dangerous levels of E Coli are periodically reported in the Los Angeles River, sometimes over 100 times more than federal guidelines permit. Even as sewage treatment has improved, the illegal dumping of portable toilets has caused spikes in the dangerous fecal bacteria. E Coli levels present a dangerous health risk to kayakers and other leisure activities along the water.

The benefits of LA river cleanup are not being evenly distributed among local communities. Prominent environmental organizations, like the Sierra Club, have pointed out that river cleanup has concentrated in predominantly white or whitening neighborhoods in the northern section of the city, further exacerbating gentrification.

Those who rely on the river for food are potentially putting themselves at higher risk for dangerous chemical consumption. The City of LA recommends only eating fish from the river once a week and to avoid consuming largemouth bass and common carps. A five-year study of the bass and carp found these species to have dangerously high mercury accumulations in the LA Watershed.

Factories near the Torrance Canal in Los Angeles (PBS)

Los Angeles has one of the lowest acreages of parkland per capita of any major US city. The lack of walkable green space is particularly acute in minority-majority neighborhoods that bear the brunt of environmental degradation by the private sector and public sector waste management projects.

Researchers have long pointed out that more than African-Americans disproportionately live closer to EPA superfund waste sites than other racial groups. Indeed, the majority of superfund sites in LA are concentrated in low-income, minority neighborhoods.

LOCAL ACTION: HOW THE LA COMMUNITY HAS TAKEN CHARGE

In the 1980s, poet-activist Lewis MacAdams defied the danger signs and gained access to the river with a pair of wire cutters. He immediately began advocating for the LA River’s ecological restoration and founded an organization called Friends of the LA River (FOLAR).

By the late 90s, MacAdams’s advocacy had begun to pay off. Restoring the LA River gained enough traction that local governments began studying the issue and dedicating millions to the cause. The past twenty years have been marked by slow and steady progress, as more of the river is opened up to recreational and clean-up activities. There are some laudable citizen and municipal initiatives dedicated to river cleanup.

A large group of local and national NGOs including Friends of the LA River (FOLAR), the Sierra Club, Heal the Bay, the National Resource Defense Council (NRDC), The LA River Index, among many others, have cropped up to advocate for change. Annually every April, FOLAR runs a community river clean up that removes multiples tons of trash from the river.

City initiatives have focused on greening the banks of the river, cleaning the water, and removing certain portions of unnecessary concrete. The impacts of these modifications are twofold.

By greening the banks of the river, the city is in effect creating local filtration sites where precipitory runoff can be absorbed into the ground and improve river water quality. A recent $1.8 million grant from the federal government is directed towards ecological restoration within the river.

The government-led programs have also made the river more accessible to the public, providing much-needed green and recreation space to the Los Angeles community. The Los Angeles Ecosystem Restoration project is scheduled to revitalize more than 11 miles of river land into an urban park and recreation area.

ROOM TO IMPROVE IN REDUCING POLLUTION

Yet challenges still remain. There are more than 17 localities with jurisdiction over the river. Though L.A. country has ultimate authority in bringing the river into compliance with federal Clean Water Act standards, the lack of coordination among relevant stakeholders can slow meaningful progress.

This is particularly acute to solving the issue of stormwater pollution. A recent report by Heal the Bay indicated that insufficient government cooperation meant that the vast majority of localities were failing to meet the 2021 Clean Water Act deadline for improved stormwater pollution standards.

On average, localities were only within 9% of the federal goals for stormwater reduction and at the current rate, it would take 60 years before stormwater would be clean.

AN EARTH5R APPROACH TO POLLUTION IN THE LOS ANGELES RIVER

Pollution reduction initiatives are most needed around the issues of reducing stormwater pollution. While mechanized techniques used in sewage treatment have successfully mitigated the harm of fecal contamination in the LA River, stormwater pollution has largely gone unaddressed by local authorities and the private sector. Yet by partnering with local communities, there is enormous potential to successfully address this issue.

There are relatively simple, efficient, and inexpensive actions that individuals can take to vastly improve the state of runoff pollution in Los Angeles. The majority of contaminants in LA River come from private residences.

When rain passes through the city, it accumulates gardening herbicides, chemical fertilizers, engine oil, and grease, and flows into the LA River and from there into the Pacific Ocean. Relatively simple steps, like opting to plant native species, reducing the use of artificial gardening chemicals, proper car upkeep, and local water collection, could vastly improve the current state of stormwater pollution in Los Angeles.

The littering of plastic containers clogs the river and poses an enormous threat to wildlife in the greater Los Angeles watershed. Yet citizens are often unaware of how their behaviors impact the LA River’s water.

Utilizing proven strategies that Earth5R has experience leading the LA River can flow clean once more.  Educational initiatives with community partners, awareness campaigns, and water clean-up initiatives are proven methods to engage the local community and give them a sense of ecological ownership of the river.

The Los Angeles River has enormous potential to display the benefits of striving towards a circular economy. Such a model rests upon the full reuse and natural reabsorption of disposable packaging and materials that are so frequently found in the Los Angeles River. If all plastic contaminants were properly recycled, and biodegradable domestic materials were used in place of chemical ones, the shores of Santa Monica Bay could be restored to their natural splendor.

A cleaner river means a healthier community and a more prosperous local environment. By working with Angelinos on small behavioral changes to reduce stormwater pollution, community initiatives will undoubtedly lead to positive social, economic, and environmental changes for the Los Angeles River.

Le Nouveau Paris: Towards a Circular ...

Severe Drought Could Pose Problems for ...

Environmental Awareness and Beach Clean Up ...