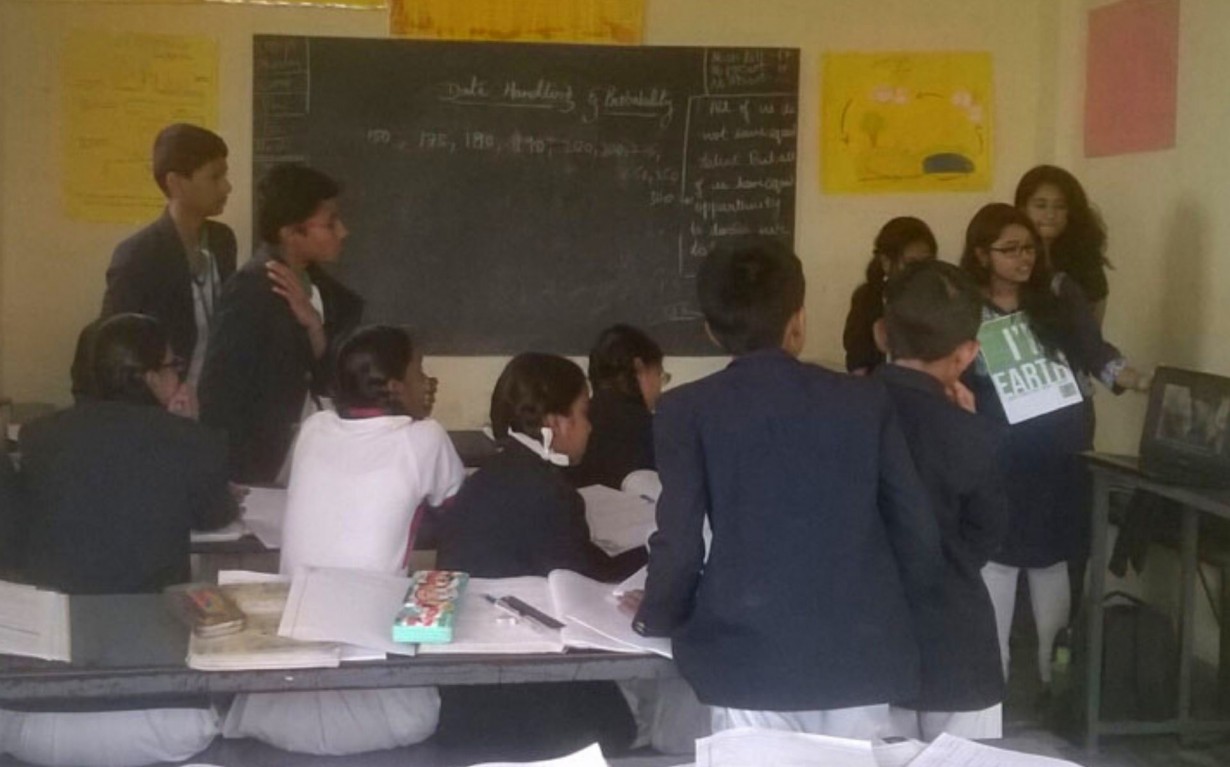 Air pollution during Diwali shoots up.  Levels of some pollutants, including sulphur dioxide (SO2) and nitrogen dioxide (NO2), seem to be on the rise. The levels of particulate matter (PM) 2.5 (particles smaller than 2.5 micrometres), which have serious health implications as these tend to get lodged in the lung and can even enter the bloodstream, have been seven to eight times higher than the standard level for several years. It has also been observed that 35% of India’s children suffer from poor lung health.

Focusing on this matter, the team at Bangalore decided to talk to the younger generation, who still have the scope to change the world.

PM 2.5 is associated with a number of health impacts such as asthma, bronchitis, chronic respiratory symptoms including, shortness of breath and painful breathing, and premature deaths. High SO2 levels are also linked with inflammation of airways and severe breathing difficulty.

On November 9, 2015, it was Parinisha’s and Poorvi’s first EarthTalk. The two members of the Bengaluruteam, along with Parinitha, went to Holy Saint High School in Jayanagar for an EarthTalk.

As an alumni of the school, Parinitha and team were welcomed in the school and allotted class 7, of the ICSE section of the school.

Diwali was two days away and they decided to shed some light on the not-so-good aspect of Diwali. Parinitha introduced the team and their role in Earth5R. Parinisha and Poorvi had a couple of presentations and videos to show to the kids.

When asked how many of them burst crackers during Diwali, at least half of the class raised their hands. As an educative response, they told the students about the consequences of bursting crackers, most of which the students were aware of. The students were encouraged to talk about the things they agreed to know. The kids spoke about pollution, diseases and accidents caused. To follow the interaction, the students watched a video on people who have been in accidents.

The kids also saw a video on how crackers are made in the first place, by children of the same age as theirs. The volunteers of Earth5R knew that chikdren’s hearts had been touched.

When the students were asked again that how many people were going to burst crackers, not a single hand went up. Hopefully, they kept their word.

-Written by. Edited by Pragya Lodha

Social Entrepreneurship and Environmental Awareness in ...

Environmental Awareness in Hollywood of Ahmedabad