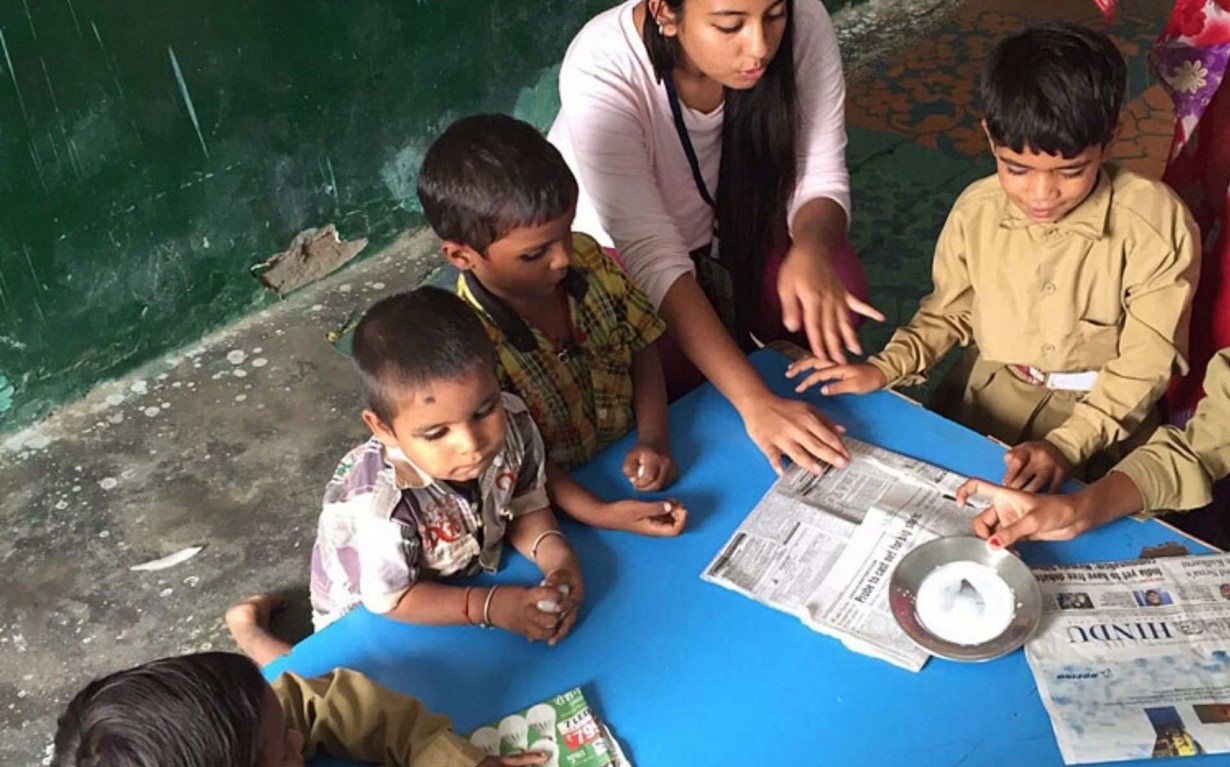 The entire Indian population has greater access to mobile phones than toilets, according to a recent United Nations study. Highlighting the country’s hazardous sanitation issues, a study conducted by the UN University in 2008 said, 64% of the India population doesn’t have access to proper sanitation.

On 19 October, 2015, the ‘Girl Gang’ of Earth5R-Team Lucknow including Asna Arif, Adeeba Saeed, Nandini Singh and Aymun Saeed decided to leave their green footprints in a village situated at the outskirts of  Lucknow. A village named Hausamau! What could be a better place to start this revolution by building environmental awareness for children, but at a village in a primary government school?

This involved an Earth Talk for environmental awareness with the kids. It was focused on educating them about waste recycling and paper bag making activity. Also, the purpose of carrying out these activities was to understand the lives of children in the village & their struggles with pollution in the rural area.

The team realized that government schools needed better maintenance and hygiene.  The school’s surroundings were unhygienic and had stray animals like cows entering the school premises, defecating near the classrooms.

These children were totally unaware about ‘Pradushan‘ (Pollution). They didn’t know the concept of cleanliness and protection of environment despite being in 5-6th grade. Even basic terms like ‘Dharti'(Earth), Vatavaran (Environment) ,’Kooda-dan’ (dustbins) were alien to them which was disappointing to know and said a lot about the quality of education and general awareness being imparted there, at the school.

However, the kids were enthusiastic about making paper bags and excited to sell them to fruit vendors for Rs.1 each and promote the use of paper bags totheir customers as well. They also learned how to reuse plastic buckets and bottles. The Earth5R team also educated them on environmental protection and reuse of non-biodegradable waste in simple and understandable terms.

The activity conducted in this village was an eye opener for the team because the concept of ‘keeping surroundings clean’ was completely missing from the minds of the people. This activity helped the team get a miniscule idea about the ignorance towards environment among people.

Lucknow team of Earth5R realized they need to spread this movement-wide enough. There are millions of people in various such villages who are unaware of the upcoming crisis that we all will face if we do not act now to save the resources!

Are Changes in Laws Putting Business ...

One Dead and Thousands Forced to ...

These are the Five Most Extreme ...