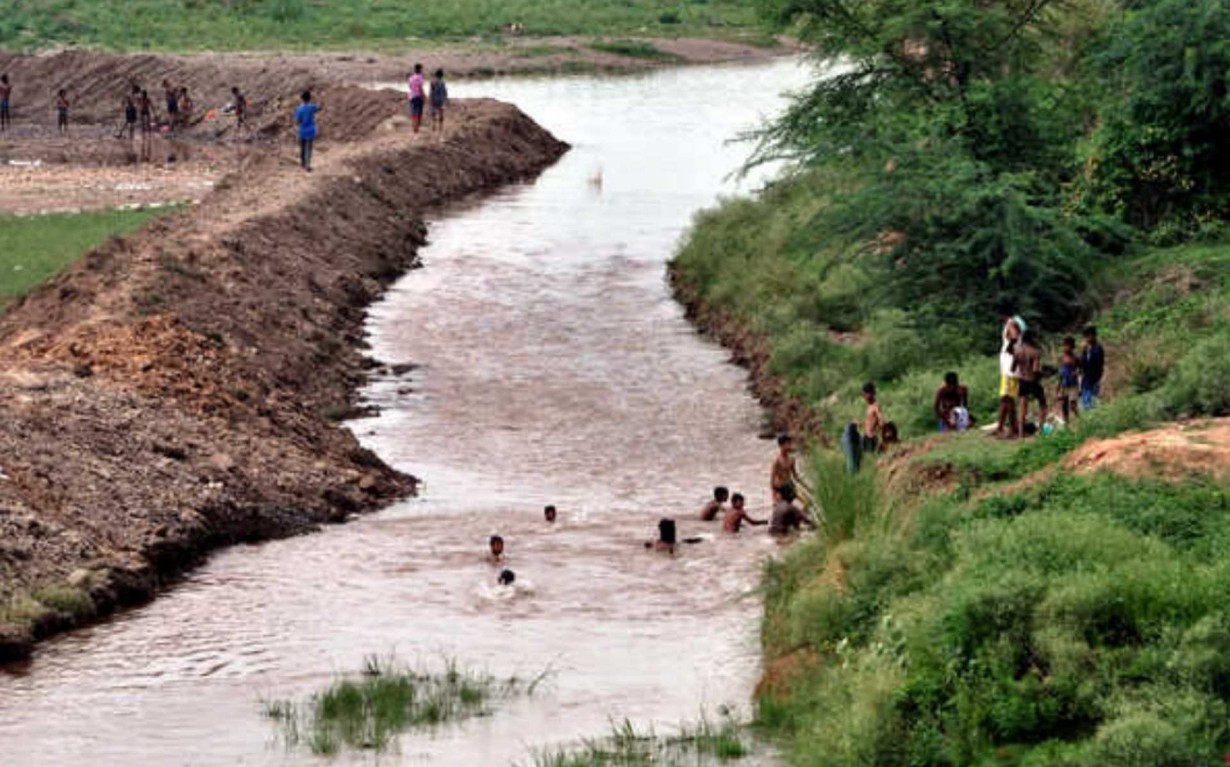 40% of the groundwater in the vicinity of Ghaggar river, has been declared unfit for consumption due to high content of toxic chemicals present in the river.

The Ghaggar river rises in the Shivalik range of Himachal Pradesh, India and flows through the states of Punjab, Haryana and Rajasthan for about 290 km, eventually losing itself in the sands of the Thar Desert.

The Indus Valley Civilization is also believed to have flourished in the basins of the Indus and the Ghaggar-Hakra River.

Path of the river Ghaggar (SANDRP)

River Ghaggar faces severe pollution threats right from its origin as several industrial units in Himachal discharge their effluents into the river. The scenario gets worse in Haryana, around Mansa, Chandigarh where the river has turned black and stinks unbearably.

This river is a disputed one, as the states of Punjab and Haryana are blaming each other for causing pollution in the river. Cities of Dera Bassi and Patiala in Punjab are infamous for their soap factories.

Meanwhile, in 2013, more than 40% of groundwater had been declared unfit for drinking and irrigation due to the high content of fluoride, arsenic, residual sodium carbonate (RSC).

In 2015, high pollution levels were recorded in the Ghaggar river at the interstate border.

In 2017, the downstream locations recorded frightfully high BOD (Biological Oxygen Demand) In the range of 240 mg/l in regions of Haryana and Punjab against the permissible limit of ≤3mg/L.

In the town of Kalka, Haryana, the Biological Oxygen Demand was 277 times more than the permissible limit

River Ghaggar is included amongst the 351 polluted river stretches of the country categorized as the highest priority due to the level of pollution.

Ghaggar river is adversely affected due to the dumping of untreated sewage due to lack of Sewage Treatment Plants (STPs), and other non-biodegradable, household wastes.

People can be seen bathing and immersing idols and other religious wastes into the river.

The Ghaggar river is facing twin attacks: the industrial waste from Himachal Pradesh and sewage from Punjab and Haryana, causing irreparable damage to animals, plants and humans alike.

In 2019, with continuous discharge of waste in the river, the affected areas were visited by various NGOs.

A. S. Mann – a member of an NGO – said: “Residents of many villages located on the banks of the Ghaggar are suffering from cancer and other kidney and skin diseases.”

Pollution of the river causes contamination of subsoil – which is an important layer of soil for agriculture – making crops prone to damage, due to the chemical wastes from industries.

In April 2017, the Ghaggar Bachao, Zindagi Bachao (Save Ghaggar, Save Life) campaign was organised by  Jat Samaj Sabha, an organisation of the Jat Sikh community.

Despite the instalment and strict enforcement measures the administration needs to take, the local community must also contribute.

By establishing circular economy based programs that have active collaborations with local stakeholders such as city administrations, local communities, universities, and educational agencies, private sector companies, and NGOs / NPOs, local problems can be turned into opportunities for the local community.

Cleaning drive to spread awareness about waste management and segregation organised by Earth5R.

Once a source of livelihood, river Ghaggar might be reduced to a souvenir, a memory. Administration along with the stakeholders, NGOs, industries, schools and communities can together protect this river from deteriorating.

In the City of Rudrapur, Uttarakhand… ...