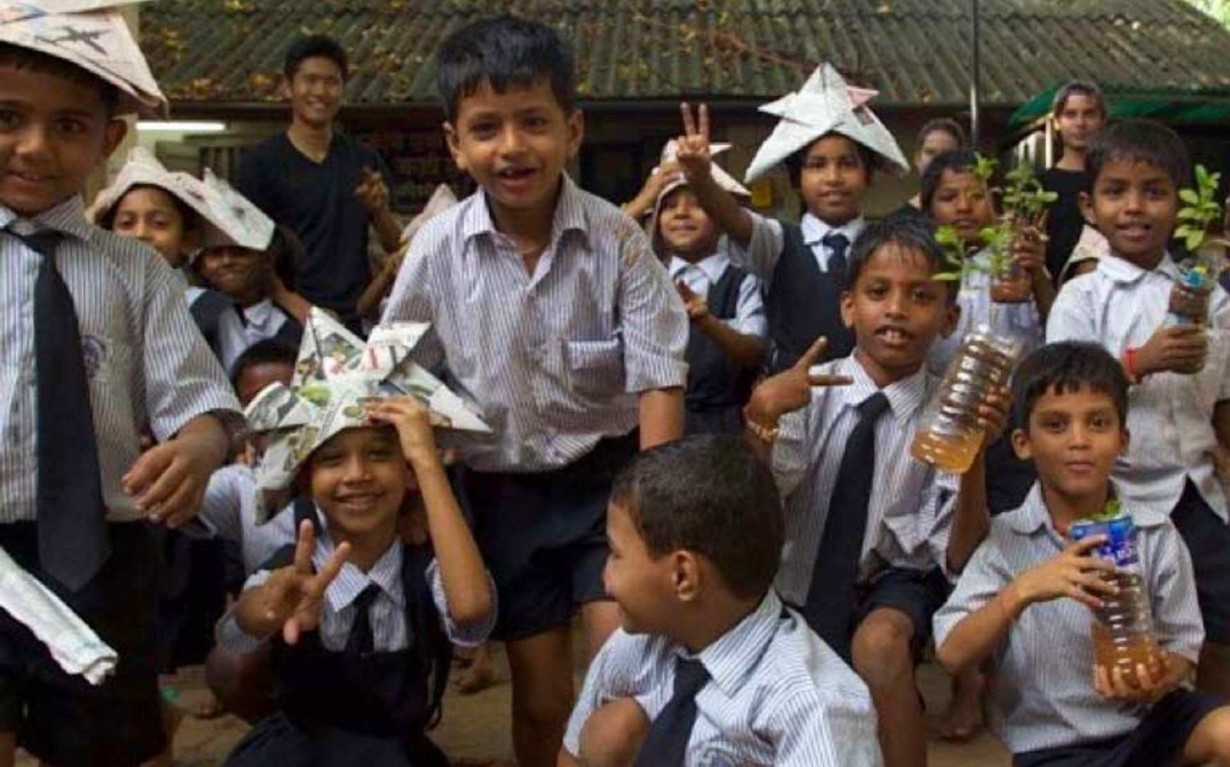 Continuing on the Green School Program, the Earth5R team – Tatsumi Yanaba, Yasmin Giordano, Marin Horii, Christian Dearden, Christina Tunzan, Maureen Allanic, and Montserrat Abud – visited Durgadevi Sharma Marathi School in Chandivali, Mumbai for a second workshop on Friday 11 August. The purpose was to introduce reuse of newspaper and organic gardening to the remaining half of the student body that were not part of the previous week’s workshop.

Ultimately, the only sustainable solution to India’s waste problem is not funding and infrastructure but changing the mindset of citizens. Earth5R aims to accomplish that through early education and appreciation of the environmentally responsible habits.

Together with the students, the team introduced their names. Next, they carefully handed out to each student a sheet of old newspaper donated from residents of Paradise Building, Raheja Vihar.

It was time to make origami helmets.

One of the members stood in the circle of students and demonstrated one fold at a time so everyone could follow. After 15 patient minutes, everyone had their head covered in a paper helmet. It was an exciting moment of seeing waste transform into joy.

Being eco-friendly is cool.

The rest of the workshop was devoted to creating organic gardens. After the students had settled down from comparing their helmets among themselves, the team demonstrated how to create a self-watering pot out of a single 1L plastic water bottle, one of the most common plastic wastes in the locality. The students followed every movement in awe as the instructor swiftly squeezed in the plant to complete the pot. The team handed out bottles to the restless students and supplied soil and plants to groups who were ready.

Finally, the team showed the students how to form a layer of mulch, essential for maintaining soil health, by tearing leaves found on the ground. In the end, every school child had a healthy up-cycled plant pot in their hand, a helmet from a reused newspaper on their head, and an accomplished and prescient grin on their face.

India has Seen Months of Extreme ...