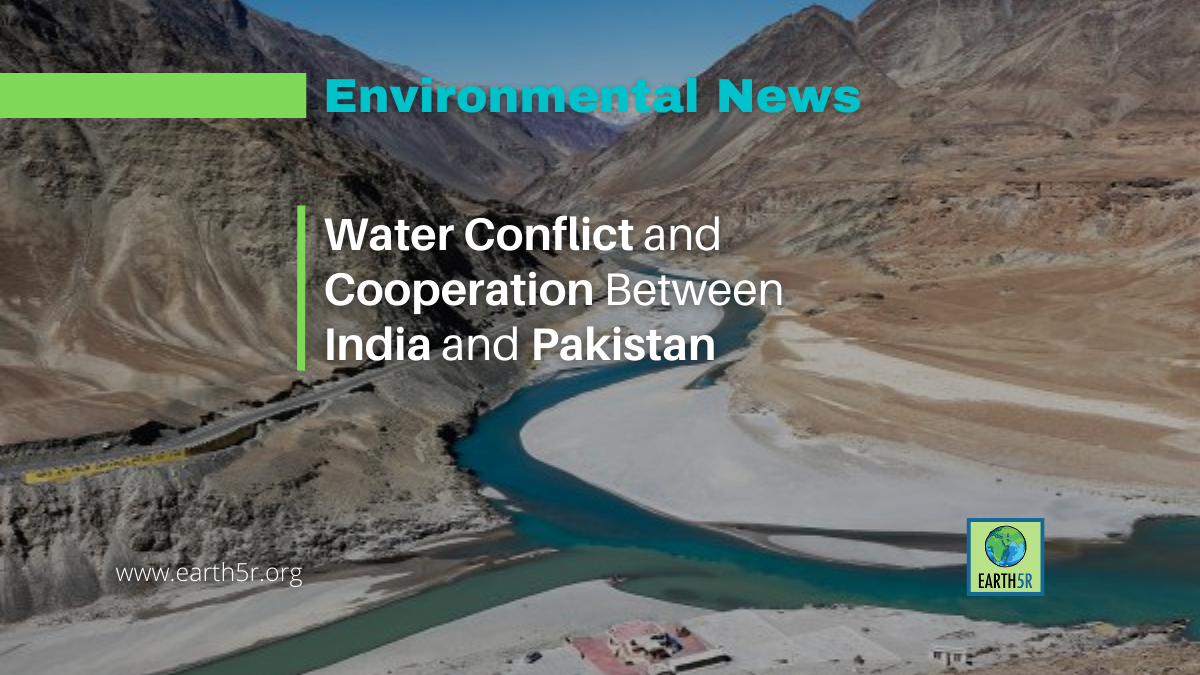 Water Conflict and Cooperation Between India and Pakistan

Water disputes between India and Pakistan are deepening. The Indus Waters Treaty (IWT) survived diplomatic tensions for almost sixty years, but recent upstream water infrastructure projects have rekindled conflicts. Meanwhile, the territorial conflict over Kashmir threatens to undermine the treaty. The worsening effects of climate change on the Himalayan glaciers could increase the likelihood of disasters and threaten the long-term water security of communities. These factors all have implications for future interstate cooperation and regional developments.

For over a half-century, rivalry over river resources has been a source of interstate tension between India and Pakistan (Wirsing & Jasparro, 2006). During the partition of British India in 1947 and the formation of the two states, border lines were drawn following what was defined as the “Indus watershed” (Gardner, 2019). The position of the lines meant that India gained control of upstream barrages, which regulated water flow into Pakistan (TBL, 2014). As the boundary between India and Pakistan cut across many of the river’s tributaries, an upstream-downstream power structure emerged, which has been the source of tensions between the two countries, particularly in response to dam projects in Indian-administered territory (see Kishanganga Dam conflict).

Glaciers and tributaries originating in the high mountains of the Ngari Prefecture in western Tibet, the Himalayas, the Hindu Kush in Afghanistan, and the Karakoram feed the extensive Indus river system. Its floodplain, where most of Pakistan’s population lives, is one of the largest agricultural regions in Asia. Around 90% of Pakistan’s food and 65% of its employment depend on farming and animal husbandry, sustained by the Indus (Pohl & Schmeier, 2014).

The river system is split primarily between India (39%) and Pakistan (47%), with small sections in Tibet and eastern Afghanistan (FAO, 2011a). In the mountains, the courses of its tributaries played a vital role in the definition and contestation of the “Line of Control” (LOC), a land boundary splitting Indian and Pakistani territory (Gardner, 2019). Many tributaries run through and along the LOC, separating the Indian-administered Jammu and Kashmir from the Pakistani-administrated regions of Gilgit-Baltistan and Asad Kashmir.

Many communities in the Indus Basin face water scarcity under current usage and storage patterns. According to NASA, the Indus Basin is the world’s second most over-stressed aquifer (Buis & Wilson, 2015). Unlike India, Pakistan relies almost exclusively on the Indus, and southern downstream areas are especially vulnerable to strains on the basin’s water supply. This makes Pakistan one of the most water-stressed countries globally, although there are significant disparities in how this is experienced (see Kalabagh Dam conflict).

Over-extraction of its finite groundwater resources is a significant challenge in the Indus Basin (Kugelman, 2016).  In the long run, groundwater recharge is expected to significantly decline (Jayaram, 2016), reducing water availability for the whole basin (Dharmadhikary, 2008; Diamond, 2014).  Meanwhile, the total water demand in Pakistan is projected to increase from 163 km3 in 2015 to 225 km3 in 2050 (Amir & Habib, 2015).  In northern India, where the Indus tributaries flow, irrigation is particularly intensive, and groundwater depletion may increase by up to 75% in 2050, putting further pressure on the upstream portions of the Indus River (Dhawan, 2017).

Compounding the Effect of Climate Change

Although water scarcity in the Indus Basin is often attributed to water mismanagement, climate change also plays an important role (Diamond, 2014). The Himalayan glaciers, which feed the Indus Basin, are predicted to diminish further in the coming years. This may increase water flow in the short term, but it will also deplete groundwater recharge in the long run, thus reducing available water resources (Jayaram, 2016). At the same time, heavy rains during the monsoon are predicted to become more irregular, bringing further challenges to addressing potential flood risks (Stolbova et al., 2016). This is likely to aggravate tensions around water distribution and flow management (Diamond, 2014).

Fears of future water shortages due to the construction of dams are causing diplomatic tensions between India and Pakistan. Divisive political narratives in both India and Pakistan are generally seen to increase the likelihood of conflict. In India, a narrative of Pakistani-affiliated Islamic terror cells attacking civilians has been used to justify backing away from diplomacy and even threatening to reduce Pakistan’s water supply (Al Jazeera, 2019; Roy, 2019). Meanwhile, nationalist media in Pakistan have blamed floods on poor water management in India (Mustafa et al., 2017).

Pakistanis also fear that India will use its upstream dams to control how much water flows into Pakistan via the Indus. This inherent suspicion and mistrust between the two states have also provoked anti-Indian sentiment in Pakistan, providing fertile ground for further hostility and conflict (Katchinoff, 2010).

Over the past two decades, Pakistan has launched multiple attempts to prevent India from building dams on the Chenab and the Neelum rivers (see Kishanganga dam conflict). The Neelum is a tributary of the Jhelum River, and Pakistan has opposed both projects because they contravene the Indus Waters Treaty signed by the two countries in 1960 (Gupta & Ebrahim, 2017).

Water issues in the Indus Basin are mainly regulated through the Indus Waters Treaty (IWT). It was signed in 1960 and mediated by the World Bank to avoid water conflict between India and Pakistan. The treaty defined the principles for interstate water sharing from the Indus (The Indus Waters Treaty, 1960). It has generally been considered a success, surviving multiple interstate tensions. The UN, the World Bank, and other Asian countries have some power to force compliance with the treaty (Abas et al., 2019). Under the IWT, control over the three eastern tributaries of the Indus River—Ravi, Sutlej, and Beas—is granted to India before they flow into Pakistan, and the three western tributaries—Indus, Jhelum, and Chenab—to Pakistan (FAO, 2011b).

Although both parties generally accepted its framework regulating water distribution between the two states, the treaty came under increasing tension as the conflict in the disputed territory of Jammu and Kashmir deepened. The allocation of control over the tributaries of the Indus is still contested, and certain ambiguities have allowed India to build infrastructure legally, which Pakistan claims undermine its water security and the treaty itself. This ambiguity has led to polarised interpretations on both sides.

How the Treaty Works

Under the IWT, the Permanent Indus Commission was established, composed of equal numbers of representatives from both India and Pakistan (Wolf & Newton, n.d.). All developments along the Indus must be reported to the other party. Any differences in opinion regarding interpreting the application of the treaty are first referred to the Commission.

Should a disagreement emerge, an independent third party may be approached. If the difference in opinion is regarded as a dispute by the neutral party, a court of arbitration can be established to resolve the issue (Wasi, 2009). Since the treaty’s signing, this conflict resolution process has been invoked only once. It was successful in settling the disagreement over the Baglihar dam. However, Pakistan continues to express its dissatisfaction with the IWT and has suggested that the treaty be reviewed (Kokab & Nawaz, 2013). Others have also claimed that the treaty is no longer fit as it only covers surface water but not groundwater (Jayaram, 2016).

The World Bank was instrumental in brokering negotiations for the IWT. As an incentive for both states to sign, the World Bank supported both Pakistan and India with aid to build storage and conveyance facilities to provide water supplies supposedly lost by the agreement (Mustafa, 2010). As the World Bank-backed up India’s plans to develop infrastructure on the river’s tributaries, Pakistan appealed to other potential mediators. Among them was the International Court of Arbitration in The Hague. Meanwhile, bilateral talks have been difficult due to the ongoing Kashmir conflict. Pakistan also turned to its ally China through the development of the China-Pakistan Economic Corridor (CPEC), with China seeking more significant economic influence in the region through the enactment of economic projects with Pakistan while at the same time supporting Pakistan’s independent sovereignty and territorial integrity (Woo, 2019).

As the influence of the United States through the World Bank has waned (Akhter, 2015; Gupta & Ebrahim, 2017), new dynamics could redefine the importance of the landmark treaty. Pakistan has been unable to prevent projects which could threaten its water, energy, and internal security. Further, the internationalization of decisions over dams may have detrimental consequences on principles of local participation. Current mediation by the World Bank under the IWT has been state-centered rather than about including affected local communities in the decision-making process (Akhter, 2015).

Observers from both sides have criticized the treaty as outdated and an obstruction to effectively exploiting the Indus River’s resources, limiting storage possibilities (Jayaram, 2016). Furthermore, the IWT does not promote the collaborative development of the Indus Basin between the two states and considers neither the effect of climate change on overall water availability nor regional distribution beyond the national level (see Kalabagh Dam conflict). It has also been pointed out that there are no restrictions on how many dams India can build in the Indus Basin, nor does it provide any quantitative measure for water distribution, thus creating a “loophole” allowing for potential over-exploitation by India (Kokab & Nawaz, 2013).

The treaty is increasingly strained as both sides pursue hydro-development projects to mitigate water and energy shortages. The shortcomings of the IWT arguably highlight the need for the development of international laws to govern transboundary rivers and lakes, comparable to the UN Law of the Sea (Abas et al., 2019). Further, in the context of climate change, arrangements will likely need to take pre-emptive action against natural disasters such as flooding or drought, which are becoming more frequent and intense.

The wider political context also affects water cooperation. In the aftermath of the killing of 18 Indian soldiers by Pakistani insurgents in Kashmir in 2016, the Indian Foreign Ministry spokesperson hinted that India might withdraw from the IWT (Kugelman, 2016). This has put the treaty in a fragile position, where it must either be backed up, updated, or provided with a viable alternative to maintain cooperative relations.