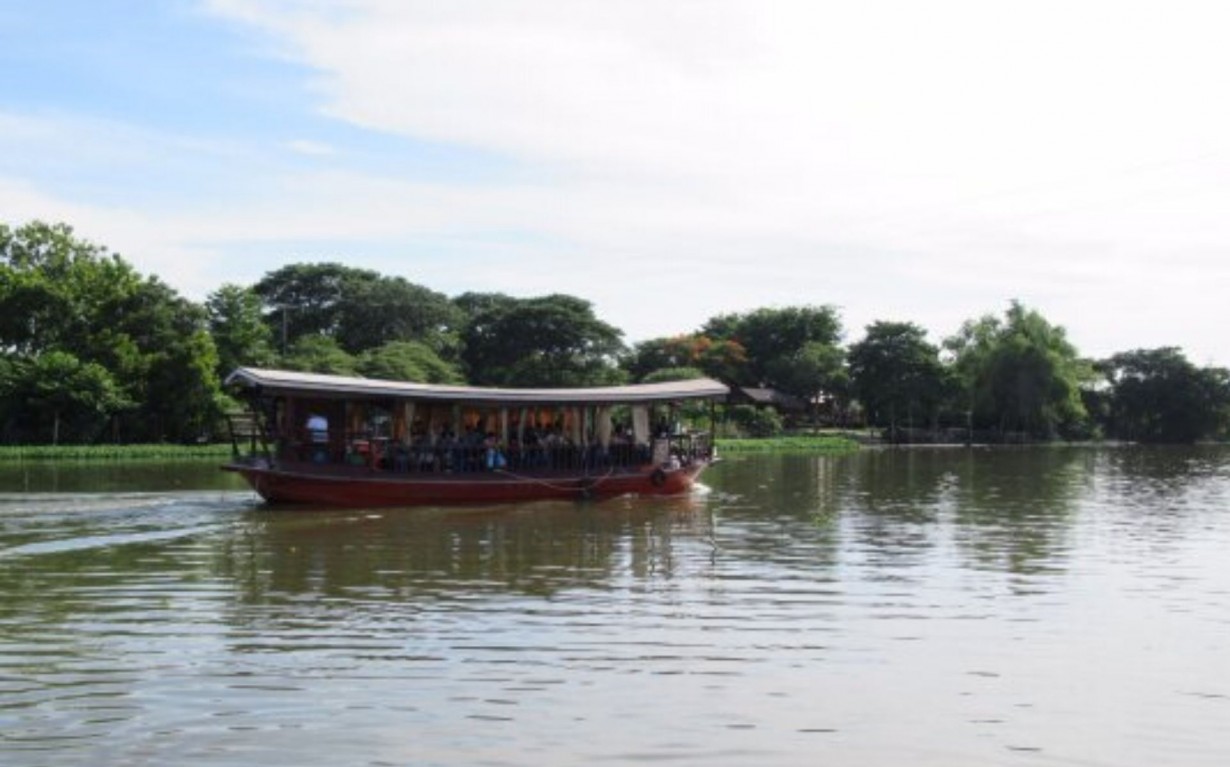 The Tha Chin River flows through four main provinces which are Chinat, Suphanburi, Nakhon Pathom, and Samut Sakhon making it one of Thailand’s most significant rivers.

The upper part of the river flows through agricultural land, where there are heavy uses of fertilizer and insecticides while the lower part, between Samut Sakhon and Nakhon Pathom, is seriously polluted with organic waste contamination, mainly from domestic, industrial, and pig farms. These factors have made Tha Chin river one of Thailand’s most polluted rivers.

The neighborhood Samut Sakhon was known to be a fishing community before it became a commerce area. It was once a province focused on agriculture and has now become an industrial hub with new food processing facilities.

The coming industry has made the province rich, making it into the top five contributors of national gross domestic product, but at a cost. According to PCD (Pollution Control Department), the Tha chin river is one of the top 5 water sources with poor water quality and has not met National Surface Water Quality Standards since the 1990s.

Pig farms are one of the most significant sources of pollution in the Tha chin river. The PCD has set up wastewater quality standards for these farms in terms of BOD (Biological Oxygen Demand). These standards, however, are not strictly enforced, allowing farmers of all sizes to disregard regulations without any repercussions.

In 2016, 12.7% of small pig farms had no sewage treatment, and in a compliance study of 82 pig farms on the Tha Chin River, 52% of farms were “non-compliant” with the wastewater standards set up by the PCD, as the effluent was directly discharged into the river.

Investors have spent a great deal of money in wastewater treatment systems, garbage disposal, and air filters to create a buffer zone between manufacturing areas and local communities.

But in Samut Sakhon, there is no such program for factories since the majority of factories are small and medium-sized, with less than 50 employees.

A STUDY BY EARTH: ECOLOGICAL ALERT AND RECOVERY THAILAND

A well-known conservation group that monitors industrial pollution called EARTH (Ecological Alert and Recovery Thailand) have followed the environmental data in Samut Sakhon province for the past few years and have found that sediment and water, as well as food in this province, are heavily contaminated.

A study was done in collaboration by EARTH and Arnika (Toxics and Waste Programme based in Prague, Czech Republic) with results showing the samples from soil and water in Samut Sakhon is contaminated with high levels of arsenic, lead, cadmium, chromium, zinc, copper, and nickel. A high level of persistent organic pollutants (POPS) was also found in eggs from free-range chickens.

The group noticed that local officials acknowledge the pollution and want to solve the problem. But the real issue is the lack of consistency of environmental management policies because the turnover rate of provincial governors is high. The person in charge changes position too quickly so they do not dare to commit to long-term plans.

Sample collection by collaboration of EARTH group and Arnika (ipen.org)

As the pollution issue continues, residents question whether their quality of life is taking a backseat in the pursuit to make money, the Bangkok Post reports. Overlooking the grass-root stage, the Thai Administration often manages everything by the top-to down process. Therefore,  local people were not included in the plan at the beginning, and the administration’s projects were not successful.

Other than polluted rivers due to wastewater discharges, Thailand also faces a massive solid waste problem, in particular plastic waste. According to Siam Commercial Bank’s Economic Intelligence Center, Thailand ranks sixth in the list of the world’s worst offenders for dumping plastic waste into the ocean, behind China, Indonesia, the Philippines, Vietnam, and Sri Lanka.

In Samut Sakhon province itself, an official report by the PCD showed that the province generated waste about 340,000 tons/year. With about 11% of them being reutilized, 45% are properly disposed of by landfills, compost, incinerators, etc and 44% are improperly disposed of (illegal dumping and open burning).

A community group called ชมรมเรารักแม่น้ำท่าจีน (We Love Tha Chin River Club) was formed in Nakhon Pathom (neighboring province of Samut Sakhon) in 1998 by the local citizens with a large contingent of whom were Buddhist monks. Their goals for the club are:

One of the club’s main approaches to solve the problem is to consider the cultural aspect of Thailand, the club realized that Buddhist monks have a high standing in society and the temples are always the center of a community, so the club’s activities were held at river-side temples as it attracts more people.

In March 2006, the club managed to get funding from The GEF Small Grant Program by UNDP. The project was marked satisfactorily completed in March 2008 with activities done such as training, workshops, capacity-building activities (canal conservation carried out for youth and creation of knowledge products such as VDO and traditional song), and a number of others. In 2017, TTW Public company also supported the club for one of their CSR activities.

Even with the administration’s policies in Samut Sakhon province, there are still a lot of non-compliance in regards to wastewater discharged by the farmer, in particular small scale pig farms. This indicates a lack of awareness of their habits and also indicates a lack of monitoring systems thus, allowing the farmers to disregard the regulations.

Investors have tried to help by spending money in wastewater treatment systems, garbage disposal, and air filters to create a buffer zone between manufacturing areas and local communities for the bigger plants and industries, but as mentioned, the majority of factories in Samut Sakhon are small and medium-sized, some with even less than 50 employees, so they are too small to invest on a proper treatment system.

As for the ‘We Love Tha Chin River Club’, the main hub is in Nakhon Pathom province, so most of the activities are concentrated in that area, while the neighboring province efforts, which the river also passes, is not quite as intensive as the one in Nakhon Pathom, so there might be a gap in that aspect which leads to a less good outcome for the overall quality of the river.

Culture encompasses the social behavior and norms found in human societies, as well as the capabilities and habits of the individuals in a community.

Solutions that are planned according to their culture will create more impact as it’s easier to process and understand by the local community to apply in their everyday life.

Perhaps, they will also gradually recognize and consider it as their new culture and norms that will be passed on to the generations to come.

Other than taking into consideration the local culture, training the locals so they can contribute more to the project, and understanding the roots of the problems and the role they have to solve said problems is also important.

Circular economy is the solution for a sustainable future. It combines economic, environment, and social aspects to solve existing problems. It is breaking with the model of the linear economy, based on a take-make-consume-dispose away pattern, by proposing to transform waste into recycled raw material for product design or other uses.

Earth5R recognizes this and has implemented numerous projects in India with  circular economy and citizen science as its main focus. Some projects that have been done are recycling training, environmental workshops for school children, and clean-ups that incorporate the local communities.

To help solve the problem of the wastewater discharge that passed the allowable effluent standard, the local community in Samut Sakhon can apply circular economy based solution that Earth5R has been doing by:

When the locals contribute to the project and actually experience change in a good way, they will realize that their actions matter, creating a sense of community ownership and love for their surrounding environment.

As the quote says, small changes eventually add up to huge results.

Mula-Mutha River Cleanup At Pune By ...